The pain of life and death rarely intrudes into the relatively safe world of the financial markets. Of necessity the focus of investment professionals tends to be on matters such as striving for good returns and managing risk on behalf of clients. It would probably be hard for anyone in the sector to function normally if they were preoccupied with existential questions.

But life at its most brutal intruded into the workings of Alger’s headquarters in the World Trade Center on the morning of 11 September 2001. All 35 of the employees present in the offices on the 93rd floor of the North Tower were killed by the terrorist attack. They included David Alger, the firm’s CEO, as well as the investment and investment support teams.

Dan Chung, Alger’s CEO since 2006, was one of four of the firm’s investment employees who, by pure chance, survived the attack. He was attending an early morning meeting in Manhattan’s midtown when news of the atrocity came through. Chung was head of technology investment at the time.

It is hard to imagine anyone blaming the remaining Alger staff if, under the circumstances, they had decided to wind the firm up. Indeed, at the time many observers assumed that is what they would do.

Instead, the survivors and the firm’s shareholders decided to regroup. Fred Alger, the founder of the firm and its head from 1964-94, came out of retirement to replace his dead brother. Dan Chung was appointed chief investment officer. Three other investment employees were lucky enough to have been away from the World Trade Center at the time of the attack. Fortunately, the firm also had other staff – including sales, marketing and back office – based at its New Jersey offices.

Naturally, it would have been possible to poach star fund managers from other firms to work under the Alger name. Many outsiders, with the best of intentions, suggested this would be the best course of action. But the survivors rejected such a move.

“If we did that we would in no way, shape or form look like Alger immediately after,” Chung says. “Each of these star managers would come with their own teams and their own track records and therefore their own process and philosophy.

“It wouldn’t be rebuilding the firm. It would just be staying in business,” he says. In his view, that was an important distinction. “It’s the one that mattered to me and it mattered to Fred Alger and it mattered to the few survivors.” It was also important to those in the investment industry who had started their career at Alger.

At the centre of the firm’s approach is an investment philosophy known as ‘investing in positive dynamic change’ (see figure). Essentially, this means investing both in traditional growth companies – which typically have rapid growth in unit volume – as well as ‘growth renaissance’ companies. The latter are firms that may have gone through hard times but which are enjoying a rebound, thanks for factors such as new management or product innovation. Apple would have been an example of such a firm. It is easy to forget that the tech giant went through troubled times in the 1990s but the return of Steve Jobs and the advent of new products, such as the iPod, helped turn it round.

Under the tragic circumstances, the funerals of the Alger casualties became a spontaneous forum for recruiting former staff. Several fund managers including Jill Greenwald, a small-cap manager, and Teresa McRoberts, a healthcare specialist, returned to the firm from senior positions elsewhere. 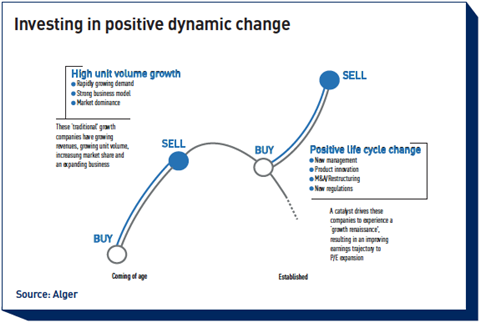 Of course, the awful events of 9/11 were 17 years ago but they played an important role in forging the firm as it exists today. Most obviously there is some continuity in senior employees including Dan Chung himself and Patrick Kelly, a fund manager now but a technology analyst back in September 2001, who survived the attack as he was away at a conference in California.

But in some respects the legacy lives on in the new generation of professionals who have joined the firm in subsequent years. Many started with little, if any investment experience – some worked in business and others were scientists – but all of them had to go through the rigorous Alger training programme. In that way, the firm’s distinctive approach has been retained even if many of its earlier exponents were killed.

Dan Chung insists that this is how the firm’s founders would have wanted it. “David and Fred long believed that they were building Alger as a company that would go on indefinitely. They believed that the philosophy, the processes and the culture that they built around the investment team were something that anybody could be trained into and that future groups could run.”