To outsiders it might seem counterintuitive for a reinsurer to hold insurance risk on its own balance sheet. Indeed, it took François de Varenne, CEO of SCOR Global Investments and SCOR Investment Partners (SCOR IP), two years to convince the group to take this step. But the key is the granularity and diversification of the risk, as well as the group’s internal model for Solvency II. SCOR’s ability to diversify the assets on its balance sheet has also allowed its asset management entity to develop internal expertise, some of which is now available to third parties.

The SCOR Group doubled in size about a decade ago, becoming the world’s fifth largest listed reinsurer by 2007 when it acquired the Swiss firm Converium. As it grew, asset management evolved from a central, treasury-type function to one with sufficient economies of scale to consider a different business model. This was de Varenne’s work from 2009 onwards and he holds two roles – one as group head of investment for SCOR and one as head of the asset management entity.

A first phase was to centralise the diverse asset management operations and to bring plain vanilla asset classes in-house where the group had sufficient size and scale. Some foreign currency asset classes are still outsourced.

“We created the team from zero in 2009 when we were two people with no centralised IT system, no clearly documented processes and no risk team,” de Varenne recalls. “So we created everything from scratch, in particular the track record. We needed to demonstrate that this new business model was more efficient than the old decentralised one, outsourced to large asset managers.”

“My assumption in 2012 to compete with the big asset managers, with a name that is unknown with a fairly short track record and a relatively small team of 55 today, was a long-term bet with no guarantee in terms of profitability of the business model.” 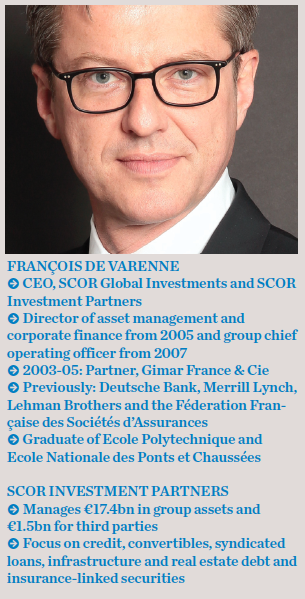 Atropos is SCOR IP’s flagship ILS fund, named after one of the three fates of Greek mythology, the one responsible for ending the life of mortals. “We started at the end of 2012 with ILS because there is a natural link between SCOR and the brokers, and the barrier to entry in terms of expertise, systems and databases is very high; you only have a few players in the world,” says de Varenne.

Atropos, which has not had a negative month since inception in August 2011, has 70% exposure to public market catastrophe bonds on average, with 30% in over-the-counter (OTC) transactions, such as industry loss warranties and collateralised reinsurance contracts. A second fund, Atropos Premium, invests primarily in the OTC market, and a third fund Atropos Catbond invests entirely in the public market. To avoid any conflicts of interest, the funds do not invest in any risk sourced from the SCOR balance sheet.

SCOR is a co-investor in Atropos and de Varenne explains how this works for the group in risk terms. In the insurance world the ‘attachment point’ is the sum of the insured loss by the reinsurer, the point at which the reinsurance applies. As the CEO explains, SCOR takes a relatively low attachment point in the ILS portfolio with diversification across a large number of relatively small losses. The reinsurance business overall has a high attachment point, meaning it is affected by large events.

“Correlation is not one for all risks but there would be correlation, or convergence of correlation, of SCOR’s liabilities and the ILS asset class on the balance sheet in the case of a very large event where we would be hit for sure on the liability side and probably also on the asset side,” de Varenne continues. “To make an analogy with the CLO or CDO market, in ILS we are more in the upper tranches and the reinsurance business is in the equity or mezzanine tranche.”

The SCOR Group’s internal model for Solvency II, approved by the French supervisor last November, also facilitates the investment in ILS since it creates three independent buckets of risk, for property and casualty, life, and investment, each of which must generate at least a level of 10% return on equity. The risk is fungible, so each euro must be remunerated to the same minimum level wherever it is deployed.

Since equities attract such a high capital charge in Solvency II (and SCOR’s internal model), the weighting has dropped from 11% in 2011 to just 3% now. Conversely, taking covenants and other security packages into account in the internal model, the adjusted remuneration for loans is above 10%. “We like the bank loan asset class, given the level of protection and the covenants it provides,” de Varenne says. “The assets are on the balance sheets of banks so they are highly protected in case of default in terms of recovery value.”

SCOR IP has also started to open its loan capabilities to third parties, having identified the opportunity to invest in assets previously held entirely on bank balance sheets in areas like euro leveraged loans, European infrastructure and French real estate debt. Banks’ leveraged loan teams welcomed SCOR’s initial calls as it helped them justify the continuation of their own activities by proving there were interested third-party co-buyers in the market. Today the platform runs €1.8bn including €865m in leveraged loans.

SCOR Group is a dynamic investor, having derisked its portfolio from early 2007 so that 40% of the portfolio was in cash or short-term government bonds by early 2009. Wearing his hat as the group head of asset management, de Varenne is increasing cash today, having started to de-risk since June 2015: “My vision of the world today is that we are in a new era of high uncertainty and volatility.” The CEO says he regards SCOR Group as a client and not simply as a shareholder or captive. The overall focus is on capital preservation, in the selection of risk and on the nature of the underlying risk.

“One of the first missions of the company is to manage the investment portfolio of SCOR,” he says. “As a reinsurance company the relationship of SCOR with its clients is based on trust, on expertise and knowledge to price risk, but also that we will be there to send cash to pay claims. This trust is based on several factors, including a strict underwriting policy, the solvency ratio and the rating of the group, but also on the quality of the investment portfolio, which backs the commitments we have with our clients and the equity of the group’s economic capital.”

SCOR IP’s third-party institutional client base not only delivers a welcome profit and income stream to help in that aim, but it also helps SCOR as an investor by facilitating co-investments in private markets with other institutional investors where both parties clearly benefit from the economies of scale provided by each other’s capital. The internally managed investment model is also cheaper than full outsourcing when costs are measured against a reliable external benchmark. As SCOR IP grows, the objective will be to ensure that all those interests remain aligned.