Agricultural farmland is not a new vehicle for institutional investment. Indeed, some of the colleges in Oxford and Cambridge in the UK have owned farmland for approaching 800 years. However, it has been eclipsed over the past 50 years by other asset classes, equities in particular. Yet there are some powerful long-term trends that suggest agricultural may be a growing asset class for today’s institutional investors.

What the economic impact of the COVID-19 pandemic has emphasised so dramatically is that, amid the wreckage to the global economy, everyone still needs to eat, points out Detlef Schoene, CEO of NewAg Partners, a specialist advisory boutique. That demonstrates the resilience of agriculture as an asset class. But there are other trends that emphasise its increasing importance. These include increased demand for better-quality food in the developed nations, global water scarcities exacerbated by global warming and high population growth in sub-Saharan Africa.

There is also a growing recognition of the toxic nature of traditional artificial fertiliser-dependent agriculture in both emerging and developed nations.

In developed countries such as the Australia, Canada and the US, satisfying those demands is difficult for family-owned farms. Typically, they have ageing owners whose children and grandchildren would prefer selling out and having easier lifestyles. “The average farm size is going to, on average, at least double and could triple because of the amount of equity that’s going to leave the industry because of all these retiring farmers,” says Schoene.

The opportunity set is large, with only a minimal percentage of the multi-trillion-dollar US farmland sector held by institutional investors, says Angus Selby, a partner at Clear Frontier Agriculture Management. That generational change is creating a requirement for private-sector financing on top of two other key trends. First, there is the increased automation of farming across the world – sometimes known as ‘agtech’ or smart farming.

Second, there is the financing of the transition to regenerative sustainable farming. Given the increasing demand for healthier and organic produce, the latter trend offers potential for higher prices.

Agtech opportunities
Agricultural technology has been around for many years, starting with projects such as automated milking in dairy farms. NewAg, says Schoene, is looking at potential deals for apple orchards in Washington state where the catchphrase is robot-ready. “You want to space your trees and set up trellises in a way that is robot-ready so you get away from having to hire seasonal labour,” he says.

Remote sensing is also an integral part, with satellite, balloon and airplane data, with analysis and diagnostics driven by artificial intelligence (AI). “Computers can instruct farm machinery to pick up something in the warehouse to spray fields with surgical precision – we talk about precision farming for a reason,” says Schoene.

It is not just in developed markets, though, that agtech has a place. In India, for example, says Samir Shah, managing partner of a venture capital fund, Peak Venture Advisors, truckloads of apples can be graded using AI. This enables higher prices to be achieved. At the same time, technology is being increasingly applied to increase shelf life of perishables, through solar drying and other agtech applications.

Perhaps the largest opportunity for institutional investors is in financing the transition to regenerative farming across the world. Food is responsible for about 26% of global greenhouse gas emissions, according to Our World in Data. Much of that is the result of the widespread application of nitrogenous fertilisers. This impact might not be as dramatic as the explosion in August of ammonium nitrate, a source of nitrogen used in fertilisers, in a Beirut warehouse but the long-term consequences are extremely disturbing.

A third of the world’s soil is already severely degraded owing to unsustainable agricultural practices. Top soil, the most fertile layer, is being lost at alarming rates, says Felipe Vilella, founder of reNature. Moreover, he says, the use of pesticides in agriculture is a large contributor to the current loss of biodiversity (commonly called the sixth mass extinction). 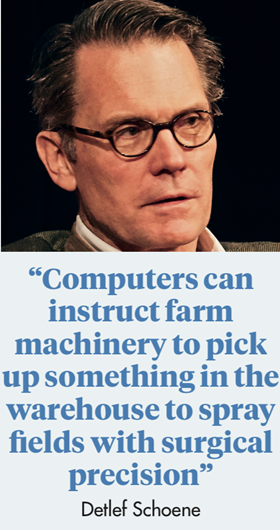 Schoene says the world needs to try to “detox” – to get away from nitrogen fertiliser that disturbs the microorganisms in the soil. That applies to emerging markets as well, says Shah, who notes: “Regenerative farming is becoming a big thing in India and, combined with a focus on post-harvest processing to add value and reduce wastage, are themes that will prevail in years to come.”

Path-breaking agriculturalist Subhash Palekar set up the Zero-Budget Natural Farming (ZBNF) initiative that begins with recognising that agriculture is fundamentally about biology and not chemistry. In Andhra Pradesh, over the past four years, half a million farmers have converted from ‘chemical farming’ to ZBNF ‘natural farming’ model, under the leadership of Vijay Kumar Thallam, an adviser to the government. The project has the support of the United Nations Environment Programme (UNEP).

The ZBNF approach ensures that soil biology is revitalised. Yields and plant resilience are increased, while water demand is reduced. Techniques harnessed include enhancing soil biology using cow dung and urine enriched with local molasses and flour to aid bacterial growth and stimulate soil microbes. The growth of more than one crop at a time is also encouraged. Pest management is achieved through sound agronomy and (when needed) numerous botanical extracts including neem and tobacco formulations.

India is not the only emerging nation where regenerative agriculture is gaining support. Amsterdam-based reNature, for example, has a mission to regenerate one million hectares of land worldwide by 2030, while also ensuring food security for 10m farmers and communities. It operates mostly in Latin America, Africa and Southeast Asia. The organisation supports a transition from conventional monoculture to regenerative agroforestry systems. It has support from some corporations that also want to shift agricultural practices.

The moves towards regenerative and organic farming do have obstacles to overcome. There is a 36-month process to transition from conventional to certified organic farming in the US, says Justin Bruch, CEO of Clear Frontier. “That means 36 months with no synthetic applications on your fields, so no fertiliser herbicides, insecticides, pesticides, no GM crops, no treated seeds,” he says.

During that period the crops are sold at conventional prices, despite lower yields and higher production costs. That provides a financing opportunity for institutional investors such as Clear Frontier.

Operating models
The marketplace still seems to be experimenting with different financing arrangements. Clear Frontier is buying individual farms in the US and renting them on a long-term basis to local farm families who want to transfer to organic farming. “We are providing them an opportunity to be able to grow their business locally, supporting both the local farm communities as well as supporting the supply of a healthier food, all while improving the environment,” Bruch says.

Traditional private equity general partner/limited partner structures may not be suitable for owning farmland itself. However, it could be harnessed for investments in agtech and smart farming. It could also finance a transition to regenerative farming and post-harvest processing.

For very-long-term investors, owning an asset class that produces a decent yield and maintains capital values over long time periods, as farmland would do, is an attractive proposition. Direct ownership or a permanent capital-pooled vehicle may be appropriate. “If a pension fund gets a decent running yield of 5%, why not just keep it forever?” asks Aaron Rudberg, CEO of S2G Ventures, a specialist venture fund in food and agriculture.

But even agtech, Rudberg says, needs a longer time horizon than traditional private equity opportunities. “This isn’t software or healthcare. The growth of a new brand may take seven to nine years,” he says. S2G underwrites its holding period on investments from anywhere from six to eight years, depending on where they are in the supply chain.

The most compelling reason why the trend towards regenerative agriculture may be unstoppable is not just the attitudes of consumers in demanding better-quality food and transparency in sourcing. Government regulation and incentives are key. “It seems to that in three to seven years’ time everything is going to be what today we call regenerative agriculture,” says Martin Davies, CEO of Westchester Group, a specialist investment manager.

In contrast, Clear Frontier’s Selby, is less sanguine. He sees a significant obstacle in the reluctance by ageing farmers who dominate the industry to make changes.

Davies, however, points out that governments are moving towards regulations to encourage farmers to do what is better for society. This would involve a move away from the benchmark of yield per hectare to a broader framework of ensuring high-quality produce, as well as protecting the soil and environment for future generations. This, in turn, enables capital markets to monetise the natural capital value and drives farmers to change the way they do things over time.

Regenerative farming may be an asset class that could tick all the boxes, including ESG, for institutional investors.