The rising influence of target-date funds on capital markets

One of the fastest growing markets in recent years is the US retirement market. Since 1995, the investment volume has increased six-fold, so that by the end of 2021, the market stood for almost $40trn (€40.1trn) AUM.

The most popular option of 401(k) plans, which represent 20% market share of the US-retirement market, are target date funds (TDFs). Their benefit is that they put together an age-appropriate combination of equities and bonds for the investor, based on the investor’s expected retirement date (the target date).

In 2021, total assets in target-date strategies rose to a record $3.27trn. A key driver of its growth has been US regulation. In 2006, the Pension Protection Act made it possible to invest in TDFs as Qualified Default Investment Alternatives in employer-sponsored retirement plans. Today, 90% of US employers offer TDFs as standard options in their retirement plans.

The so-called glide path indicates the TDFs’ asset allocation depending on retirement. For investors who are more than 25 years away from their target retirement date, a typical TDF holds 80-90% of its assets in diversified equity funds and the rest in bond funds. The bond portion then increases with age. About 20 years before retirement portfolios usually shift towards safer investments.

In order not to deviate from the strategic asset allocation, TDFs rebalance if there are major deviations from the target weights. For the rebalancing flows, the relative performance of equities versus bonds is decisive. If both asset classes move similarly, as seen in some cases this year, the relative weights change only marginally and the need for adjustment is relatively small.

In Q1 2020, however, rebalancing flows were strongly supportive because equities had significantly underperformed bonds. The deviation of the actual allocation weights from the target weights was correspondingly large. Bonds had to be sold and equities bought to bring all asset classes back towards their respective target weights. TDFs are thus counter-cyclical, unlike strategies such as risk parity.

Further, the larger the deviation from the target weights and the more funds managed by TDFs or similar strategies, the greater the effect on markets. It is therefore likely to become greater in the future as the assets under management of TDFs continue to grow strongly. The effect can be amplified by similar strategies such as 60/40 portfolios, should they rebalance at the same time. 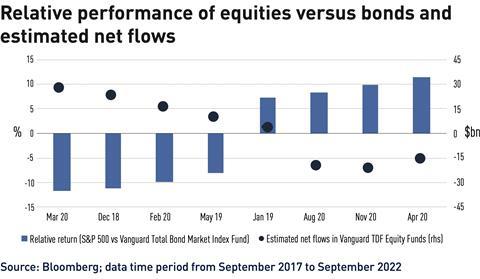 Interestingly, the rebalancing effect seems to be larger on equity than on bond markets. Towards the end of Q1 2020, for example, equities rebalanced up after the sharp sell-off, while bonds did not fall after outperforming. Often, rebalancing flows are overshadowed by other events such as Fed meetings, so market movements can never be clearly attributed to one event. In other words: a strong relative divergence in the performance of equities versus bonds increases the likelihood of a rebalancing movement, especially in equities, but this is by no means certain.

The often positive development of equities at the end of the quarter in recent years is likely related to an interplay of various effects such as option expiries, Fed meetings, savings plans and rebalancing effects. In particular, continuous passive ‘savings plan’ inflows in the form of retirement savings have often acted as a stabiliser during crises. They ignore fundamental events such as pandemics, inflation or recession worries because they are automatically triggered at the push of a button.

We believe that the growing relevance of TDFs will have three main effects on the market structure. First, the continuous inflows into TDFs should be positive for equities in general and especially for those stocks held in the TDFs’ portfolios. This is amplified by providers’ increasing the share of equities within TDFs in recent years and the younger generation primarily using TDFs. Accordingly, inflows into equity (index) funds, which are mainly used in TDFs, should continue to grow and this should support equity markets, all things being equal.

The third advantage is that in a crisis there is an automatic stabiliser in the form of TDFs due to their built-in rebalancing mechanisms. As we have seen, TDFs tend to act countercyclically in a crisis. However, this only applies as long as equities and bonds do not fall sharply at the same time. Also, TDFs often focus exclusively on only these two asset classes. Alternatives and commodities are usually left out. The limited diversification has worked well in recent decades with steadily falling interest rates and in an environment that tends to be deflationary.

Nevertheless, it could prove problematic in the future – especially if the correlation between equities and bonds were to remain in positive territory for a longer period of time. Then there would be little or no rebalancing after strong movements of both asset classes as seen in the first quarter of this year. Moreover, TDFs are not likely to have a stabilising effect in recessions with increased unemployment, because monthly payments into pension products are then likely to decline.

Against this backdrop, investors should closely observe when the trend of positive inflows into index products reverses and index funds are sold on a net aggregate basis. Although this is likely to take years (or even decades) for the market as a whole, index stocks that are disproportionately held by such ETFs are likely to come under pressure.

Until then one should not oppose the structural passive inflows, but exploit the knowledge of these flows and rebalancing as an active investor.