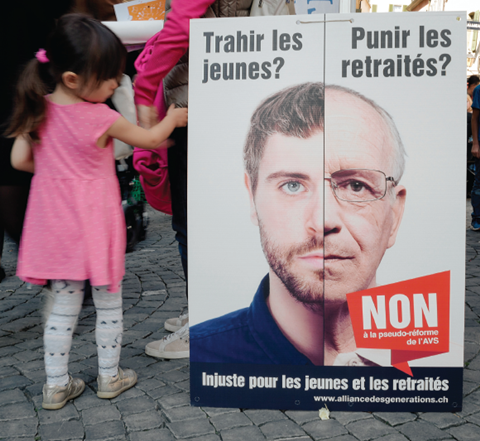 The Swiss public has rejected a complex reform package for the first and second pillar. What comes next?

A no vote in the referendum on pensions seemed like a ‘what if’ thought experiment right up until the ballot. But on the last Sunday in September, the Swiss voted against reforms to the first and second pillar in the Altersvorsorge 2020 (AV2020) legislative package.

At the end of the previous week, representatives from stakeholder groups in the pensions sector celebrated the 25th anniversary of the pensions publisher VPS. Guests agreed the retirement system was in need of reform. But none wholeheartedly supported AV2020.

Following the many debates since AV2020 was mooted in 2014, various elements were incorporated. Among them a one-off state pension increase for all, demanded by the left; a cut to the minimum conversion rate from 6.8% to 6%, requested by experts but diluted by unions; an increase in the statutory retirement age for women to reach gender equality, supported by conservatives.

Additionally, it was proposed to use some VAT revenue to finance the first pillar buffer fund, Compenswiss. As this would have meant a constitutional amendment, the cantons as well as the electorate would have to grant approval.

At the VPS event, guests hoped the referendum would be approved in its entirety to ensure reform got going. Others were hoping for a rejection, arguing that voters do not yet feel sufficient pressure to agree to reform.

Eventually, the latter got their wish. Many stakeholders and commentators gave their opinions following the results (see opinions in this report).

At the VPS event, opinions were also split on whether or not a new compromise will be on the table soon. This seems unlikely and stakeholders have retreated to re-establish their positions.

News commentators say the reform package may now be broken down into manageable chunks, of which only some would need public approval. The hope is that something will happen before the next national election in autumn 2019.

But the question remains as to which side is willing to accept which amendments. Analysts had a hard time sorting through the results – a post-referendum survey of 10,000 people showed no signs of the typical east-west ‘rösti trench’ division often seen in referenda (the rösti trench, characterising the social differences between German and French speaking Switzerland, is named after the national dish made out of grated potatoes).

Because of the complexity of the question, no-votes came from the left as well as the right. Turnout was also low, at under 47%.

Two visible trends were the rejection of the proposal by women because of the increase in the retirement age and by young people, who feared the reform would create generational imbalances. Overall, 53% of surveyed retirees said yes to the reform. Those most likely to agree were urban-dwelling  men over 50 with a university degree.

Many in the second pillar are disappointed as this is the second time a necessary cut in the actuarial conversion rate has been rejected. Furthermore, these rejections were not directed at this proposal but at some of the questions that accompanied it.

One key issue is that only a small share of Swiss employees and retirees are members of pension funds that have to guarantee in full the minimum conversion rate. Most companies and multi-employer pension plans have top-up assets above the mandatory level and can set any conversion rate they want. The 6.8% only has to be guaranteed on the mandatory portion.

However, in the low interest rate environment the gap between the minimum conversion rate and the actual rate – which is trending below 5.5%  – means all funds feel it. The danger is in the cross-financing between active members and retirees, which only works for a certain time.

The few comments that have been published following the initial post-referendum chatter show that the priority might now be reform of the first pillar and its buffer fund. This touches all citizens and reform has been necessary for over a decade.

Changing first pillar funding to adapt it to the new longevity situation and the low interest rate environment has been a ‘mission impossible’ since the turn of the millennium.

In 2004, the eleventh revision of the first pillar failed and was dropped by 2010. It included an increase to the statutory retirement age for women. Instead first pillar reform was linked to the second pillar in the AV2020 reform package.

It seems likely that changes to the second pillar – including the adjustment of legally required minimums for certain parameters – will be a secondary issue in further reform debates.

On the wish list of pension funds will be a de-coupling of the minimum interest rate from political decision making. Further, the pension fund association ASIP would like to see the introduction of flexibility within the setting of the conversion rate, rather than setting it by legislation.

One thing everybody agrees on – maybe with the exception of social minister Alain Berset, one of the creators of AV2020 – is that any new proposal should be simpler.

What the referendum decision means

Switzerland’s pension reform package – Altersvorsorge 2020 – was rejected in a referendum this September.

The public voted against changes to the first and second pillar systems, as well as additional financing for the first pillar AHV.

The Swiss electorate had to decide on a complex package of technical adjustments to the pension system as well as a VAT increase to finance the first pillar.

The two separate questions posed in the referendum were both rejected, albeit only by narrow margins:

• 52.7% said no to the Altersvorsorge 2020 package, which included lowering the conversion rate and a one-off first pillar pension top-up for all;
• 50.05% of the people said no to increasing VAT to help finance the AHV.

The second question had to be put to the cantons as it would have meant a change to the federal constitution – 13.5 cantons and half-cantons out of 26 rejected this proposal.

This means the country’s VAT will be lowered for the first time since its introduction in 1995, creating considerable costs for Swiss businesses that will have to change their bookkeeping.

The public and cantons were asked to approve a different use of this money – to top up the first-pillar AHV.