1
Switzerland: In need of a reformist zeal 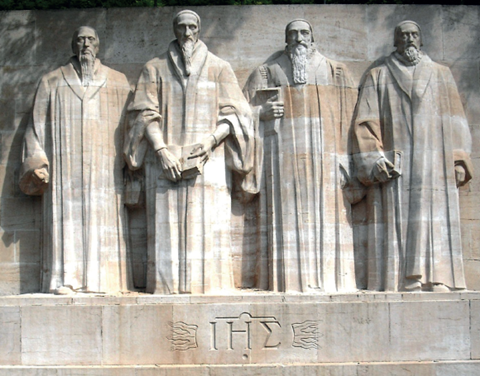 The Swiss pension system needs reform but consent is needed in a federal referendum. Have politicians learnt from campaigning during the rejected Altervorsorge 2020 proposals?

Pensions in Switzerland are a political issue. Not just because of the influence politicians have over key quotas and minimum rates Pensionskassen have to fulfil (see Less complexity, more solidarity). But also because of the country’s model of direct democracy. The electorate has a say in all important changes to the pension sector. It was the electorate that decided to introduce the mandatory BVG second pillar starting in 1985. But, it was also the Swiss population that rejected the Altersvorsorge 2020 (AV2020) reforms in autumn 2017.

Analysts have blamed the complexity of the topic and the lack of understanding among the voters for the result. Others say too many elements were packed into one proposal, which included everything from retirement age to first-pillar AHV funding, from a lower conversion rate to details on how to calculate contributions to each pillar.

And then of course there are the political parties with opposing views on how big a part the second pillar, in effect the capital markets, should play in the basic mandatory retirement provision – especially in a post-Lehman world with low interest rates.

Given the likelihood that any change to existing pension arrangements will have to be put to the people the topic is good for politicians and parliamentary representatives. It enables them to create headlines for proposing a motion. Of course, more often than not they are tabled out of concern for change and reform. But, the question – as always – is who stands to benefit.

On the other hand, a recent survey of 563 trustees in Swiss Pensionskassen shows that changing the investment regulations, the BVV 2, was low on their list of priorities. 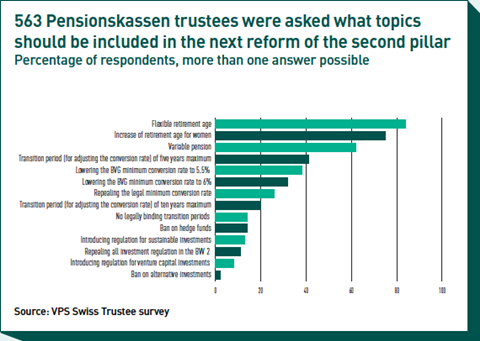 The survey, conducted by the publisher VPS, asked trustees about reform proposals being discussed by politicians or put forward as amendments to regulations. All topics concerning amendments to the BVV 2 were ranked low. These included diverse themes such as a complete switch to the prudent person principle and doing away with all investment limits, banning hedge funds or alternatives completely as well as regulation for sustainable investments.

High on the list of priorities is making the retirement age more flexible to allow people to either retire early or contribute longer to the second pillar. Currently the statutory retirement age in Switzerland is 65 years for men and 64 years for women. Raising the latter was one of the most disputed points of the AV2020. It is the second item that Swiss trustees would put to politicians.

In third place came the demand for allowing pension funds to introduce variable pensions. At the moment, pension promises made when contributions to a Pensionskasse start cannot be altered. This leads to conundrums for some providers as active members’ assets have to be re-appropriated to pay out retirement benefits.

One solution is to lower the pension promises to future generations with higher incomes which are usually paying contributions above the legally required minimum. This question of the correct conversion rate (Umwandlungssatz) is a heated debate in the media as it is used by politicians to inflame inter-generational debate.

At a conference organised by VPS, Hanspeter Konrad, director of the Swiss pension association ASIP, noted that pensions were definitely “in the focus of politicians”, but not to solve problems. “There are hardly any structural reforms on which a majority can agree to ensure solutions focussing on the future. There are merely smaller repair works not showing any real commitment to reform,” he said.

He added polarisation did not help and noted the lack of successful reforms was among the reasons Switzerland fell by three places in the latest ranking from Melbourne Mercer Global Pension Index. The Swiss pension system has fallen out of the top 10 only making 11th place.

In a press release, Samuel Lisse, CEO of Mercer Switzerland, said: “The 2018 results show that in Switzerland there is a certain backlog when it comes to pension reforms.” One of the main points which needs improvement is adequacy. Because of the uncertainties around the conversion rate (the key figure used to calculate the monthly pension from the accrued assets), it is difficult for future retirees to know what income they can expect from the second pillar.

Indeed, the debates around the pension reform and proposals to make pension payout levels less untouchable have weakened the public’s trust in the system, particularly the second pillar.

At the VPS conference representatives of the youth organisations of three political parties shared their views on the future of the pension system.

Luzian Franzini, co-president of the Young Green Party, noted the pension system was “being run to the ground” which will definitely mean future generations will lose out. He pointed out that “all Swiss people would benefit from a healthy first pillar” and to ensure that reforms were needed.

Tamara Funiciello, president of the young socialists JUSO, wants to “strengthen the AHV and weaken the second pillar”. She sees the first pillar in which everybody contributes a share of their income but only receives a capped pension as an important achievement in social policy which should not be eroded. She added: “Many women still only have an AHV pension.” This is true for about 500,000 women because they are below the minimum income threshold needed for employers to pay contributions to a second pillar Pensionskasse.

Andri Silberschmidt, president of the young liberals Jungfreisinnige, is convinced that the second pillar “allows simple workers to participate on the capital market and it holds employers accountable” for providing for their employees’ pension. “Questioning the whole system because of some shocks does not make sense.” He would like to see a depoliticising of the second pillar so that politicians have less or no say on figures and minimum return requirements.

It will probably be up to the people again to decide on the next reforms. At the time of writing, signatures were being collected to hold a referendum against the latest proposal to finance the first pillar AHV more sustainably.

Both houses of the Swiss parliament – albeit with a small majority – agreed to divert more money from value-added tax (VAT) to the AHV and raise contribution levels to help with the pending baby-boomer retirement shock due in about 2030.

It was mainly the Liberals and Greens who opposed this so-called Steuervorlage 17 (Tax Proposal 17). They have initiated a referendum to be held next May. Their main concern is that by injecting the AHV with tax revenue real reform will be postponed indefinitely. Further, they argue this top-up should never have been included in the tax bill. Its original purpose was to remove tax benefits for international companies and the finance sector. Switzerland has been under pressure from the OECD to remove unfair tax advantages by 2020 or face sanctions.

Commentators have said the referendum could see the AHV funding plan dismissed by voters along with connected tax legislation. Other left-wing parties have joined the protest as have unions and the debate will be used in the election campaign which has already started in the run-up to the October 2019 election.

Meanwhile, it is up to the unions and employer representatives to come up with a reform proposal for the second pillar by March. Then the government will translate it into a new legal framework, if a majority is found. And after that it will once again be a matter of how to wrap and explain it to the Swiss electorate to ensure reforms can finally be implemented.

In its most recent assessment of the Swiss state finances, the International Monetary Fund urged pension reforms: “Raise the retirement age and increase the working population to ensure adequate own- and public-resources for retirement and link the guaranteed conversion rate in the second pillar pension scheme to a long-term market interest rate.”

For any of this to happen a consensus within the government or parliament is not enough. As referendums are easy to hold and as their outcome is binding, any reform needs a broader consensus as well as support from the electorate.

As a first step, though, Konrad hopes for politicians to come up with broadly supported reform proposals: “I hope that the fog will lift in Berne to create a clear view and prevent a shipwreck in the pension system.”