The Swiss Bankers Association (SBA) has called for the country’s investment guidelines for occupational pension schemes to be amended to encourage more investment in alternatives.

Launching a study on investment by occupational pension plans earlier this week, the association said that the political debate around the “AV2020” pensions reform package “wantonly” neglects the role of returns on invested pension assets in building retirement capital.

Pension funds must adjust their asset allocation, in particular to invest more in alternative assets, the association argued.

Herbert Scheidt, chairman of the SBA, said: “Without an adjustment to asset allocation, pension funds will face yield-related problems. This would translate into accepting the risk of a funding shortfall and cuts to benefits in the pension system for no good reason.”

Several Swiss Pensionskassen have cut conversion rates, which are used to calculate members’ pension payout levels, in recent years to put the schemes on a stable financing footing.

The association said that Swiss pension funds’ asset allocation has remained almost unchanged since the 1980s despite significant changes in the market environment, such as the implementation of negative interest rates.

“Generally speaking, their investment policies are still dominated by bonds, equities and domestic real estate, while non-traditional investments continue to play only a secondary role,” it said.

According to recent surveys by Credit Suisse and UBS, Swiss Pensionskassen’ allocation to alternative assets increased last year, with the former noting it had reached an all-time high of 6.86%.

According to the SBA, there is too much resistance to investing in alternative assets, which meant pension funds miss out on opportunities to generate much-needed return.

It said returns on Swiss second pillar assets would increase by around CHF8bn (€7.5bn) if pension fund portfolios were more broadly diversified, and that Switzerland lags other countries in terms of pension funds’ investment performance.

The association argued that the investment guidelines for occupational pension plans (BVV2) contributed to deterring greater allocations to alternative assets because of they way they categorise assets. 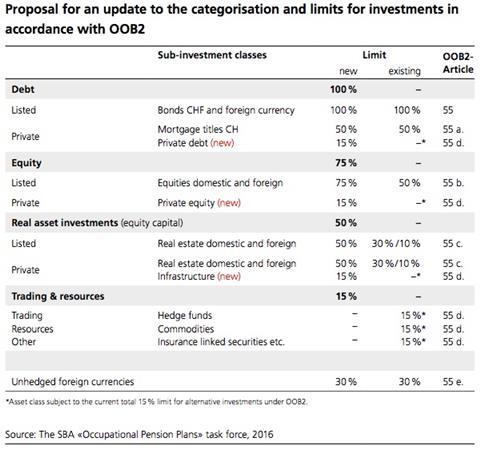 The SBA proposed that asset classes be broken down into equity, debt, real assets, and trading and resources. Private equity, private debt, and infrastructure would be assigned to the categories of their listed counterparts.

This recategorisation (see table*) would align assets more closely “with the intended financial purpose of the investment”, according to the SBA.

“Further to this, the category limits are adjusted or relaxed on the basis of the changes outlined,” it added.

It said that changes to the guidelines would be relatively easy to make, and pointed out that pension funds and businesses had also called for amendments.

It said that opinion is increasingly swaying in favour of introducing the ‘prudent investor principle’ for pension funds, which the SBA supports, but that changes to the investment guidelines could be a helpful intermediate step.

“The good news is that the issue is timely and it is being discussed,” said the SBA.

“The hope is that occupational pension plan stakeholders will assert themselves in a coordinated manner, with the result that the framework conditions for asset management are improved as soon as possible and the existing potential for optimisation can be exploited.”