Swiss pension funds had the highest allocation to alternatives out of six leading pension markets in 2017, according to the latest UBS Asset Management Pension Fund Indicators report.

Switzerland has retained this position – ahead of Australia, Japan, the Netherlands, the UK and the US – since 2001, UBS’s report showed, with its allocation rising to nearly a third in 2017.

This was the result of a fall in allocations to fixed income over time, from 42% of assets in 2001 to 33% in 2016. Swiss pension funds reallocated this money mostly to real estate and alternatives rather than to equities.

While pension funds continued to invest mostly in equities and bonds, UBS reported, allocations to alternatives more than doubled in the six pension markets since 2001.

The “standout” increase was in Japan, where the allocation in 2017 was more than eight times the level in 2001, UBS said. 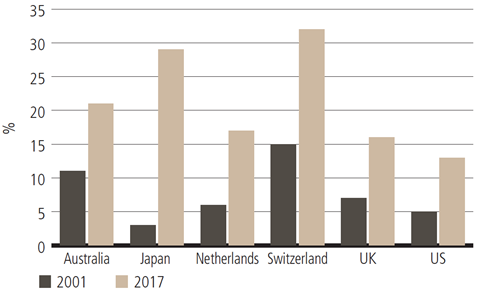 Malcolm Gordon, head of UK institutional at UBS Asset Management, said this year had brought a fresh set of challenges for investors, with market conditions so far contrasting sharply with those that had prevailed “for much of the post-financial crisis” period.

“Given the combination of macroeconomic uncertainty and heightened geopolitical risk, it seems likely that the overall volatility regime will be higher for all asset classes compared to the low levels of volatility in 2017,” he said.

“In this environment investors will have to think differently, work harder, and be more precise in their quest for attractive risk-adjusted returns. We believe that it is an environment in which high-conviction active investing is likely to prosper.”

Separately, the asset manager took the opportunity of the report to highlight its belief that sustainable investing “is now at an inflection point”.

“It has moved from a niche investment strategy to a new standard for investment management,” UBS said, “enabled by the increased availability of material, non-financial data commonly referred to under the umbrella of ESG, or environmental, social and governance criteria”.

It drew attention to figures from the Global Sustainable Investment Alliance showing that “sustainable assets” under management increased from $14trn (€10.6trn) in 2012 to $22trn in 2016.