After a national public transport strike on Tuesday, Dutch trade unions again organised industrial action throughout the country on Wednesday in protest against plans to raise the state pension age.

Three of the Netherlands’ biggest unions – FNV, CNV and VCP – called on staff in the cleaning, metal, construction and industrial sectors to go on strike, with 30,000 people answering the call, according to FNV. Protests also took place in the education and in healthcare sectors but these were not strikes.

The unions want to put pressure on the government in the run-up to the resumption of negotiations on a new national pension agreement, which stalled last year. The relaunch is about to take place, but according to those involved there is still a lot of uncertainty about the way discussions will play out.

FNV negotiator Tuur Elzinga addressed thousands of campaigners in The Hague, home to the Dutch government, earlier this week, and lashed out at the press coverage that had stated that partial deals had already been tabled.

Elzinga said he was still waiting for the official cabinet response to the demands of the unions. Until then, FNV, CNV and VCP maintained there would be no negotiations.

Elzinga also promised the strikers that any agreement would always be presented to them first. “Even is there is no agreement, we will get back to you,” he said, “but only in order to prepare new protests with you.” 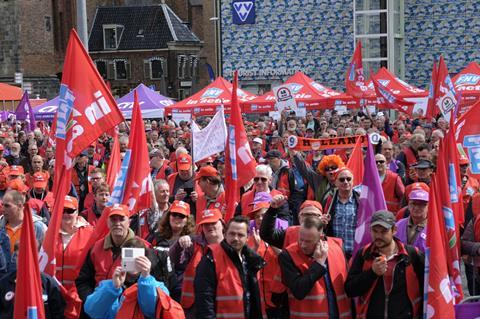 Workers on strike in Netherlands this week

The unions want to scrap the Dutch government’s plan to link the state pension age to longevity, and for the government to find a more structural way to cover the expenses.

Last week The Hague was still hopeful that Wouter Koolmees, secretary of state for social affairs, would send a letter with an offer to the unions before today, which is a bank holiday in the Netherlands. That expectation was not met.

Koolmees declined to comment on a potential pension deal after meeting with the Ministerial Council on Wednesday.

“I have all kinds of talks with trade unions, employers and political parties to ensure that we will achieve results,” he said. “I’m not going to speculate how close these results are. That would not be helpful.”

An offer to the unions should, according to their demands, include a temporary freeze of the state pension age at 66 years and four months, and an early retirement scheme for physically demanding or hazardous professions.

One of the unions’ ideas was to link the state pension to the minimum wage, according to the Dutch national paper Volkskrant. This would prevent people with higher incomes from opting for such a scheme. From what age people could retire and who would pay the bill were still topics to debate.

In addition to freezing the state pension age and the ability for people with tough jobs to retire earlier, unions have also demanded that corporate pension payments are indexed again. In the past 10 years most pensions have not been raised to compensate for the loss in purchasing power due to inflation.

This article was amended on 3 June to correct the last paragraph’s reference to corporate pension funds being indexed.