The ECB’s actions and words after its June meeting were met with approval throughout the world’s capital markets. As much of what was announced was already priced in, there was a fairly muted response, which wasn’t sufficient to weaken the euro too much.

There remains the status quo of low growth, easy money – and those concomitant themes of searching for cash alternatives with yield and fruitful carry trades – and range-bound rate markets.

The US economy is recovering at its weakest pace since the mid-1940s but this is turning out to be a stable 2%. The recovery is arguably half way through its duration and forecasters are suggesting that growth figures could improve, as indicated by strong employment figures. At the same time, economists are running out of suggestions as to what could boost the trend higher.

China’s economy is another where growth could hardly be described as stellar. However, there is a sense of relief that the authorities are not behind the curve and that policy initiatives, as well as the recent currency depreciation, should ensure that its growth remains sustainable.

The Ukrainian situation has intensified on the ground, with escalating violence and bloodshed, although the ramifications appear to be diminished. Europe’s resolve on sanctions have already been tested, with France going ahead with its plans to sell Russia assault ships. There is little sign, however, that risk premia are narrowing in either Russia or the Ukraine.

Perhaps it will be other geopolitical risks that rattle markets. The second half of this year sees a full election schedule, with Indonesia, Turkey, Brazil all holding elections and, in November, President Obama facing his final set of Congressional mid-term elections.

A good deal is being made of the lack of volatility in markets, with bond and forex market volatility, for example, estimated to be around 40-45% lower than 10-year averages. Trading floors across the world – equity, fixed-income and foreign exchange – are much quieter.

Part of the decline in volatility is down to the decline in trading volumes as tougher banking regulations begin to bite. Banks are being made to hold more capital and, at the same time, trade less on their own accounts – if at all, in the case of the US banks.

The low volatility is also a by-product of the financial repression to which the world’s major central banks have been subjecting global savers since the Fed first embarked on its policy of unconventional easing and liquidity injections. With short rates rooted to zero, the scope for price movements up or down is limited in size throughout asset markets.

New York Fed president William Dudley made a speech suggesting that the low volatility made him “a little nervous”. He joins other central bank officials, at the Bank of England for one, in voicing concerns about this calm. 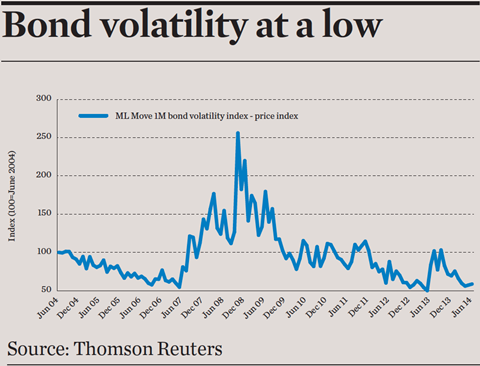 He hints that these persistently low volatilities could be clouding investors’ risk perceptions, inferring a stability that perhaps does not exist. The search for yield pushes investments further along curves, and lower down credit ladders, funding with carry trades along the way.

Comparisons are being drawn between today’s markets and previous episodes of all pervading confidence abruptly ended by bubbles bursting. Of course, the circumstances of today are never quite the same as those of yesteryear.

There are some features shared with 1993-94 or 1998 and much more recently in 2006-07, and there are some obvious asset price bubbles around, such as property in the Gulf states, London or Hong Kong, and even the global art market. Are equity markets at bubble level? Or high yield credit? Or Bunds?

Maybe there was a little truth to the conspiracy theory that the taper tantrum had a hint of the deliberate, that the Fed wanted to shake some of the certainty about the longevity of ultra-low interest rates.

The ECB’s moves have accentuated how much further behind in the cycle it is compared with the Fed, but overall there is little change: the major central banks are still in easing mode, with no rate hikes before the year is out.

The US Treasury yield curve has flattened significantly through this year, confounding forecasts and despite some upbeat economic news through the second quarter, particularly on the employment front. Some have argued that the decline in longer bond yields is linked to the idea that the Fed funds rate will not return to its longer-term average of 4%, as that rate is now thought to be too high. Others suggest that it is likely that US rates have been taking their recent cues from Europe, where bond yields have declined in response to reduced inflation expectations.

Equity markets have continued their upward trend, although credit is finding it harder to keep up, particularly in the US, suggesting that the credit cycle there is quite mature. US corporate activity has been increasing, with a recent surge in M&A deals.

In Europe, many believe that the ECB’s recent moves could benefit credit markets, if liquidity in credit is meaningfully improved. although European credit spreads have narrowed more than in the US this year, spreads in Europe are still the wider, and inflows stronger. Couple that with a supportive central bank and it implies an agreeable backdrop for this asset class. As ever, caution is advised and in Europe’s still small credit markets, this already appears to be quite a crowded trade.

In spring 2012, the Australian dollar (AUD) trade-weighted-index (TWI) began to rise steeply, in contrast to commodity prices, which had restarted their declining trend from the highs of 2010. Midway through 2013, during the financial market’s ‘taper tantrum’, it seemed the currency had returned to its historically closer relationship with commodity prices.

This year, however, the currency has failed to decline, even as commodities have trended distinctly lower. For an economy so reliant on commodity exports, this on-off relationship between the currency (in terms of its TWI) and the price of commodities has caused a degree of discomfort for Australia’s monetary policymakers.

In an open economy like Australia’s, the currency should decline when the world price of its exports decreases, according to economic theory, cancelling out some of the dramatic changes in the terms of trade as demand is switched to cheaper domestically produced goods. Unfortunately, the AUD has not fallen, and so the relative price of those domestically produced goods are still too high for that switch in demand to occur.

Australia’s central bank (RBA) is getting used to trying to drag its currency down. It may now, however, be running out of options, with rates already at “their lower bound” and verbal intervention proving less effective. The RBA may well be accepting that in this carry-dominated, liquidity flush world, the AUD is unlikely to begin declining, but they may also be hoping that this low volatility world will also limit the upward trajectory too.