The ceiling has no fans

It has attracted 77 comment letters from experts – many of them critical. It could also force defined benefit (DB) plan sponsor’s to accelerate funding of their  DB schemes. It could only be a project to amend the snappily titled International Financial Reporting Interpretations Committee 14 (IFRIC 14), The Limit on a Defined Benefit Asset, Minimum Funding Requirements and their Interaction.

Last June, the International Accounting Standards Board’s interpretations committee issued an exposure draft (ED) affecting the ability of a third party, such as trustees, to restrict the surplus a sponsor can recognise – irrespective of how likely the trustees are to seize part or all of the surplus. The ED could also force sponsors to take account of statutory requirements that are substantively enacted when they determine the size of the pension asset available to them.

As the IFRIC puts it: “The proposals address whether other parties’ (for example, pension trustees) power to enhance benefits for plan members or wind up a plan affects the availability of a refund.” Much of the debate around the impact of these proposals has drawn attention to the fact that they will, in accounting terms, draw a distinction between a buy-in and a buy-out of a scheme liability.

The IFRIC’s predecessor issued IFRIC 14 in 2007 in an effort to clarify the standard’s asset-ceiling requirements. Paragraph 58 of IAS 19 limits the measurement of a DB asset to the “present value of economic benefits available in the form” of refunds from the plan or reductions in future contributions to the plan.

IFRIC 14 also deals with the interaction between a minimum funding requirement and the restriction in paragraph 58 on the measurement of the DB asset or liability. When a DB plan sponsor applies IAS 19, it must first measure the DB obligation and the fair value of any plan assets. This calculation will produce either a DB asset or liability at the balance sheet date. If there is a surplus, the sponsor recognises the lower of the surplus or the asset ceiling.

From the outset, Lane Clark & Peacock (LCP) has questioned the wisdom of the IFRIC’s amendments. LCP partner Tim Marklew says: “My key concern with the whole of IFRIC 14, even before this ED, is that it draws a line in the sand which means that very similar companies with similar pension schemes – albeit with slight differences in the small print of their rules – are treated very differently. 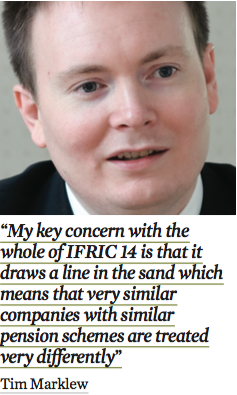 “It almost doesn’t matter where the line is drawn, it is still going to be quite arbitrary. It is difficult to see how the IFRIC could make a distinction along some of those fault lines within the guidance that hangs together and which makes sense for all companies.”

Aon Hewitt consultant actuary, Simon Robinson, is worried that the amendments risk creating a distinction without a difference by treating a scheme buy-in differently from an economically identical buy-out for accounting purposes.

Robinson explains: “The difference between a buy-in and a buy-out is very much an angel on a pinhead-type argument,” he says. “A buy-in policy is an insurance policy or bulk annuity for a group of people in a scheme that precisely matches the benefits payable. The insurance policy removes investment risk and other risks.

“The trustees buy the policy in their name. Although the monies might go to the pensioners direct, it is still notionally in the name of the trustees. They do, however, have an asset that exactly matches that liability. The only way for the insurer to get off the hook would be to go bust, which seems pretty unlikely.

“Although ultimately the trustees do have the obligation, they have a policy that matches that obligation. The only exposure is the risk of insurance company insolvency, and not just insolvency but insolvent without the funds to pay the benefits they have underwritten. In other words, the insurer has sufficient assets to pay something.”

But the ED does have support. Eric Steedman from consultants Towers Watson says of the IFRIC 14 amendments: “It is a very situation-specific thing. The implications are going to be very plan specific and so the implications of what it does or doesn’t do must be worked out on a company-by-company level. One can’t extrapolate from one company to another.”

Nor is he entirely convinced that the IFRIC has followed a flawed logic in drawing a line between a buy-in and a buy-out. “I’m not sure that the distinction is so artificial. If you think about someone buying annuities, if you do it as a buy-in, that is an investment choice, whereas a buy-out is a settlement. So there is already that distinction.

“You can argue about the merits or demerits of this distinction, but the ED carries logically through what is already in the standard into this area as well. Para 115 in IAS 19 says that if you hold a matching asset, you value that as the same as the DBO that it matches. So, when you buy in and hold an annuity contract, you have a change in value after day one. That difference goes through OCI [Other Comprehensive Income requirements].”

He continues: “You can argue about the economic distinction but if the insurance company fails under a buy-in the sponsor is still on the hook. Under a buy-out, instead of buying a matching asset you are replacing the promise to the members with an insurance contract and you no longer have any promise to the member. The distinction is already there and the ED seems to draw the line in the same place. The issue of whether this is the right distinction is another matter that takes you back to the whole fundamental basis of IAS 19.”

It is likely that the interpretations committee will look at constituent feedback in May when it could drop the project and leave local enforcers to follow the lead of the UK Financial Reporting Council, which last year nudged companies in the direction of the requirement in IAS 1 to disclose critical judgements and areas where there are uncertainties affecting the reported numbers.