European institutional passive investment grew by nearly three times as much as active investment between 2013 and 2017, according to IPE’s Top 400 Asset Managers survey.

IPE’s data shows the compound annual growth rate for European institutional passive investments was 17.5% for that period, while actively managed assets grew by 6.4% a year.

At the end of 2016, the survey shows €5.8trn of European institutional assets was invested in active strategies (76%) versus €1.4trn in passive (24%), according to a like-for-like sample of 216 asset managers across the period.

At a global level, the passive share is slightly larger than for European institutional assets at 27% (€8trn). Global active assets under management stood at €29.3trn at the end of 2016 (sample size: 231 asset managers).

Global passive assets grew by more than 20% a year between 2014 and 2017, according to IPE’s survey. Actively managed assets grew 12% a year in the same period. 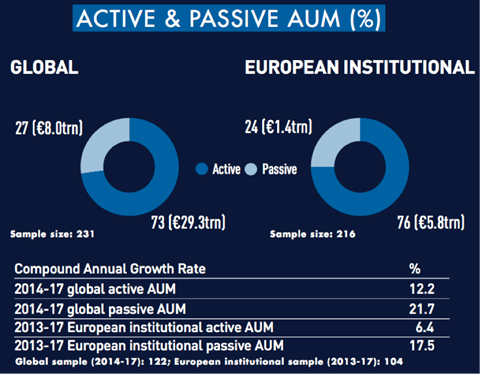 Larger samples of 200-plus managers showed higher compound annual growth for actively managed assets both globally and at a European level. This reflected the higher weighting of smaller, mainly active managers within the larger samples.