The UK government will aim to convince the European Union to agree to an “expanded” equivalence arrangement for financial services after the country’s exit from the EU, it revealed yesterday.

This is at the heart of its proposal for “new economic and regulatory arrangements for financial services” that it set out in its white paper on the future relationship between the UK and the EU.

It said these would preserve “the mutual benefits of integrated markets” and protect financial stability, but could not replicate the EU’s passporting regimes. The UK’s and EU’s current levels of access to each other’s markets would not be maintained, it said.

The bid for a financial services deal to be based on a wider equivalence arrangement was official confirmation the government had abandoned the pursuit of a deal based on mutual recognition, which the UK financial sector has been pushing for.

Miles Celic, chief executive officer of lobby group TheCityUK, said it was “regrettable and frustrating that this approach has been dropped before even making it to the negotiating table”.

Chris Cummings, chief executive of the Investment Association, said it was disappointing the government had ruled out mutual recognition as their preferred approach, but expressed optimism about the stance it had taken.

“We believe that a solution based on enhanced equivalence can deliver a deal that works for savers in the UK and across Europe, and for the asset management industry that supports them,” he said. 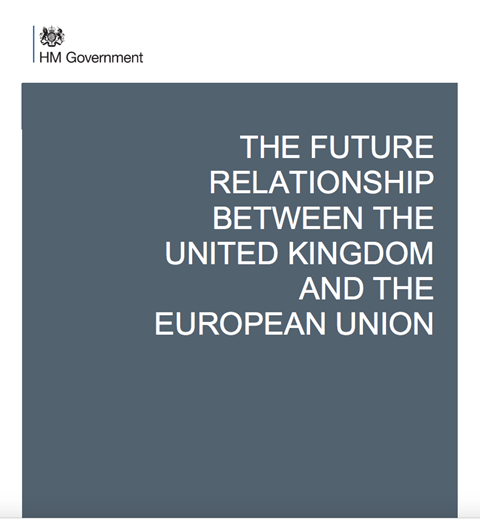 Mark Boleat, senior associate at think-tank the Centre for European Reform and former chairman of the City of London’s policy and resources committee, told IPE the white paper did not contain any surprises.

“It’s been clear for some time that what the industry was asking for, in effect mutual recognition of regulatory systems, was never going to be achieved,” he said.

“Now this is the first time the government has admitted that. So there is a welcome realism.”

The European Commission’s and European Parliament’s Brexit negotiators delivered initial responses to the white paper on Twitter. Guy Verhofstadt welcomed the proposal that the overall future EU-UK relationship should take the form of an “association agreement”.

Welcome UK proposal for a future Association Agreement, as proposed by @Europarl_EN. We will analyse White Paper in light of our priorities: #CitizensRights, an operational backstop for Ireland & a deep economic relationship based on the integrity of the Union & internal market. pic.twitter.com/VcaWKWD50t

In the white paper, the UK government said existing EU equivalence regimes on financial services with non-members “are not sufficient to deal with a third country whose financial markets are as deeply interconnected with the EU’s as those of the UK are”.

Equivalence as it existed today was “not sufficient in scope for the breadth” of this interconnectedness, it said.

Areas currently not covered by equivalence include bank lending and insurance, according to Boleat.

The government has also argued for a “structured withdrawal process”, where equivalence could not be withdrawn without a consultation being held on possible solutions to maintain it.

Currently equivalence can be withdrawn by the Commission with 30 days’ notice.

Celic at TheCityUK said the current form of equivalence “does not meet any requirements for success”.

Boleat said: “It’s clear what Britain would like. I don’t think people are under any illusions this would be easy to achieve”.