Financial markets have suffered a nasty bout of indigestion since October. The interplay of sentiment and volatility induced widespread pessimism, with added concern that market tantrums could subsequently bleed into the real economy. In fact, Duke University’s Global Business Outlook Survey in December 2018 showed that 48.6% of American CFOs foresee a US recession by the end of 2019.

“That data doesn’t line up, and no economist should project a recession from current numbers,” says Dec Mullarkey, managing director at Sun Life Investment Management, which has $31bn (€27bn) in pension assets.

Sentiment is being driven by uncertainties which are difficult to quantify, like the outcome of a trade war with China. “But fundamentals still signal a risk-on environment,” says Robert Johnson, former president of the American College of Financial Services and former deputy CEO of the CFA Institute.

Consider the premise that 2016 functioned as a reset and an inflection point in both market and business cycles. It has been a recurring theme in the financial press that the expansion is losing momentum. “The economy is not a golden retriever,” says Rich Sega, global chief investment strategist at insurance asset manager Conning, which has $133bn under management. He says that many of the policies enacted since 2016 work with lags, and should be measured from 2017 when the laws were passed.

If the economy hit a low in 2009, when the National Bureau of Economic Research declared an end to that post-crisis recession, the recovery might appear to be a decade old. A 2016 reset would, however, incorporate tax and deregulatory policies.

The 2017 tax cuts, which boosted the US growth rate, will be sticky, proving hard to undo. “The new Congress might try to reverse parts of the tax code, but would be unlikely to get through the gauntlet of both chambers and a presidential veto,” says Sega. Divided government can also prevent mistakes. True, stasis might constrain pro-growth policies like further tax cuts, “but at least we can’t go off the rails”, says Sega.

Historically, the best market years have not occurred during divided governments, which often produce fair-to-middling results. Notwithstanding, Cooper Abbott, president of Florida-based Carillon Tower Advisers, which oversees $69bn, suggests that “the full impact of tax and regulatory changes will take time to materialise as a multi-year phenomenon, and will show up gradually in business investment, R&D and new market development”. 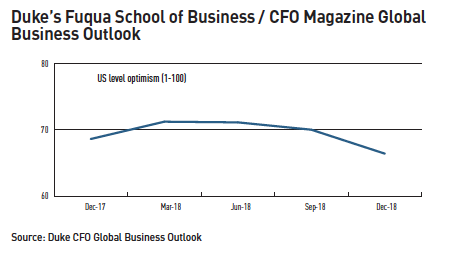 The Fed is a driver of market performance. After spooking markets in October, with remarks that interest rates remained “a long way from neutral”, Fed chairman Jerome Powell softened his tone in November and recalibrated expectations. After he reassured investors that the central bank was not on autopilot, the spectre of a hawkish series of rate increases receded. “Markets have processed that the Fed will be driven by what shows up on the doorstep, and that thinking will eventually make its way back to the psyches of CFOs,” Mullarkey says.

Mullarkey takes further comfort from the number of private equity firms and distressed funds that have been raising money in anticipation of the next meltdown. All that dry powder may become a source of capital. Experiences in 2008 taught investors to move nimbly and within a short window, to take advantage of bargains created by crisis.

In conjunction with higher rates, quantitative tightening (QT) has cast a pall over investors’ spirits. QT is designed to let reserves dwindle and unwind the Fed’s balance sheet. Yet the programme has been on autopilot since 2014 – during which period the economy has boomed, unemployment has shrunk, and equities soared until the past quarter.

Wood notes that innovative platforms tend to be deflationary, because short-term rates are more sensitive to GDP, while longer rates focus on inflation. For example, DNA sequencing costs are dropping at 40% per year, with potential for massive unit growth. On that basis, she says inflation may have peaked, and investor fears over an inverted yield curve will prove baseless. Wood references historical development periods for the telephone, electricity and internal combustion: “In those days, the yield curve inverted over half the time, with the steepest inversions at periods of the most explosive growth.”

Wall of worry
As always, risks abound, from trade wars, a global slowdown, and mounting corporate debt, to political woes such as Brexit and French unrest. Manufacturing in China, Korea, Mexico and Taiwan is contracting. Could US government chaos lead to a credit rating downgrade? Johnson is reassuring: “People look for patterns where there are none; they believe economic cycles are more regular than they are; they interpret news according to current sentiment.”

Particular concerns, such as leveraged loans and struggling US home sales, deserve keen attention. Wood does have some answers to weak housing starts. She says: “2008 wiped out many builders, and with the current low unemployment rate, they don’t have the workers. These structural issues will be resolved.” Capex has also been disappointing, particularly given the boost provided by 2017 tax treatment. Nevertheless, successful trade talks may alleviate tariffs, enabling businesses to commit to longer-term expenditures.

In sum, the evidence indicates some slowdown for 2019 rather than a full-blown recession. Among 73 economists surveyed by the Wall Street Journal in early January, the average US growth rate projected for this year was 2.2%, down from 3% in 2018. The Fed, slightly more optimistically, is estimating 2.3% growth for 2019. Sega compares the uncertain visibility in the current climate to a poker game where a couple of down cards could turn up right. “And I think we’ll get them.” he says.