1
US Equities: A time to focus on value

Investing into a market with such high valuations presents a challenge

Two factors have stood out in terms of US equity markets since the financial crisis. First, the impact of quantitative easing (QE) and near-zero interest rates. Second, the growth of the FAANG stocks (Facebook, Amazon, Apple, Netflix, and Alphabet/Google).

US equity markets are expensive on almost every measure. They are costly in absolute terms and exorbitant in relative terms. Investment consultants such as Cambridge Associates are recommending that its clients tilt exposures away from the US and towards other developed countries and emerging markets. But interest rates are entering an upward cycle as the Federal Reserve tightens, while Facebook’s recent troubles over misuse of data may prove to be a catalyst for reappraisals.

At the end of February, the MSCI US index was 54% premium above its median and more expensive than it has ever been relative to non-US developed markets. “The cumulative underperformance of the world-ex US relative to US was 0.85 (1 being equal) which is as much underperformance that has ever been seen in the past before it starts to turn around,” says Celia Dallas, chief investment strategist at Cambridge Associates.

US small caps are looking particularly vulnerable. While large-cap earnings expectations have been upgraded, small-cap earnings expectations were downgraded 8% in 2017, says Dallas. Half of the debt of small-cap companies is floating rate and they are likely to be badly affected by rate rises. In contrast, of the S&P 500 ex-financials, only 11% of debt is floating rate and the fixed-rate debt has an average maturity of 11 years, so any rise in rates will take some time to affect large caps, says Dallas.

The key for non-US markets to outperform US is for earnings growth in other markets to outpace that of the US. But US tax reforms have led to a sharp increase in the shareholder take of corporate earnings, with virtually all US companies benefitting, says CT Fitzpatrick, CEO of Vulcan Value Partners, based in Birmingham, Alabama.

If the earnings outlook is sending mixed messages, what about the high-profile tariffs that the Trump administration is determined to put into place? Clearly, the ramifications of a trade war would be calamitous, but such an outcome still seems unlikely. Steel and aluminium inputs, together with the other products (lumber, washing machines and solar cells) imported into the US economy together amount to only 0.3% of GDP, says Dallas.

Moreover, she adds, the tariffs charged to the US are significantly higher across the board than those charged by the US. From a strategic perspective, Dallas says, negotiating a better balance seems sensible.

“The philosophy of having higher tariffs applied to the US than the US was charging made sense at a time when the US was trying to encourage the global growth of capitalism and democracy that is other reasons apart from pure economic ones,” she says. The US was certainly successful with the post-War Marshall plan and the reconstruction of Japan. Seeking to negotiate for more balance today makes sense, but certainly raises risks, Dallas argues. A trade war would be an awful outcome for everyone.

If earnings growth in the US look supported by tax cuts, should investors in 2018 be more worried than they were in 2017 and 2016? Satya Pradhuman, CEO of Cirrus Research, a small and mid-cap research specialist, based in New York State, says they should: “If someone asks whether the US market is risky, they are asking the wrong question. What matters is not whether the market is expensive or risky, but whether leadership stocks are expensive.”

Cirrus sees ‘leadership stocks’ as the top-decile stocks in terms of momentum over the past year which encompasses the FAANG stocks.  Extreme valuations of leadership stocks historically have been subsequently followed by a change in the market leaders.

The Cirrus ‘polarisation quotient’ (CPQ) is defined as the ratio of the median price/earnings ratio (P/E) of the top-decile momentum stocks and the median P/E of the market as a whole. Momentum stocks here are defined as the top decile of stocks in the blue-chip sector or specifically the Cirrus Large Cap index, ranked by strong performance over the past 12 months. 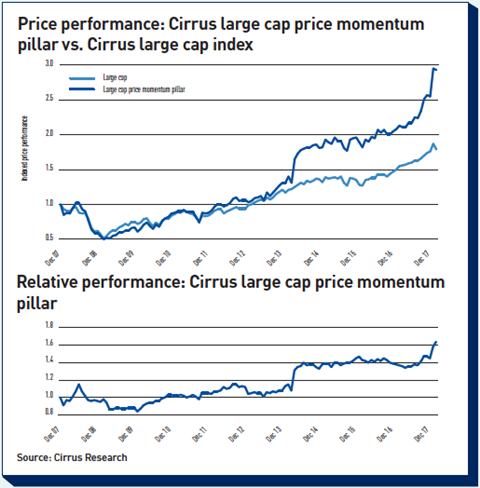 The measure also accounts for short-term reversals over the most recent month. A high CPQ reading implies that the market has become more polarised. Mid-March figures showed that the US was much more polarised than most markets, with a CPQ level of two standard deviations above normal. Extreme polarisation and the subsequent reversal of high beta directly points to an adverse backdrop for momentum investing, says Pradhuman.

Crowded trades ultimately reverse but such turnarounds can be violent. That is, the more profound the move into an asset, the larger the wake of exiting arbitrageurs. Pradhuman sees the mid-March CPQ levels in the US market as a reason for great concern. The cautionary note is driven by the extreme valuations seen among those sharply trending stocks in the past year. The chart relates the price performance of the market and of the leader stocks in the US.

FAANG stocks are driving up the polarisation. FAANGs have built enormous businesses with huge barriers to entry and enormous scale. As Dallas points out, their profit margins are twice those of the broad market and can stay high for some time. 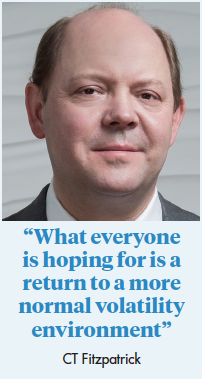 But Pradhuman sees polarised markets as pointing to more volatility among leadership stocks with factors like quality and valuations likely to become more dominant. The recent concerns over the misuse of Facebook data triggered violent swings in share prices, a development that supports Pradhuman’s contention.

For US equity investors, focusing on value in the current environment may make sense. Companies that generate high free cashflow are inherently more stable, argues Fitzpatrick. So, of the FAANGs, Alphabet/Google looks attractive because of the high free cashflows that it generates. In contrast, Tesla with negative free cashflow is a highly unstable company. Amazon, while producing high free cashflow with its Amazon Web Services, is also consuming cash elsewhere, with a complex business that Vulcan, for instance, finds difficult to value.

Vulcan can only find 35 or so names in the US large-cap universe that it sees as priced at 70% of their economic valuation. Small caps are more expensively priced in general, so it has been forced to keep 20% of their small-cap portfolios in cash for lack of sufficiently attractive opportunities.

The imposition of QE has clearly led to an artificial environment for the US equity market. Volatility has been low and stocks have been given a boost by low rates. “What everyone is hoping for is a return to a more normal volatility environment,” says Fitzpatrick. The signs suggest that may well be the case with rising Treasury yields and increased equity market volatility. But with both equity valuations and volatility increasing, it does not make the US equity market an attractive place to be for new investors, although for active managers the increased volatility comes as welcome relief.