1
US equities: Past, present and future

Are US equity valuations in bubble territory?

Are US equities at extreme valuations? This is a question any global investor must ask. Some measures do show extreme overvaluation – in particular, the cyclically adjusted price/earnings ratio (CAPE) popularised by Nobel laureate Robert Shiller. But there are many other macroeconomic metrics that investors may consider, each with its own specific flaws.

While Shiller’s CAPE may show extreme overvaluation, is the signal misleading? The measure peaked at over 33 in 2018, the highest since the 2007 trough of under 4.7. It has since climbed back to over 30.

For some, such as GMO, the answer is clear. “We think US equities are less expensive than during the tech bubble but, apart from, that are as expensive as they have ever been,” says Tommy Garvey, a member of the firm’s asset allocation team.

GMO itself uses a variation of Shiller’s CAPE, giving similar results. The conclusions are that prior to the fourth-quarter slump last year, US equities were more expensive than before the 1929 crash and GMO now sees similar extreme valuations.

Other investment managers, however, do not accept US equities are at particularly dangerous valuations. “We are definitely not in the camp that markets are massively expensive, we just don’t think they are cheap,” says David Lafferty, chief market strategist at Natixis Investment Managers.

The question that divides investors is how much value the past has in predicting the future. Current price/earnings  (P/E) valuations seem more expensive the further back you look. As Lafferty points out: “If you go back to the 1850s, the market today looks absurdly expensive”. But even in more modern times, over the past 25-35 years, when equities have become a staple of portfolio construction, the average P/E ratio has migrated higher – and for good reasons, according to Lafferty, because markets are more liquid and diverse. 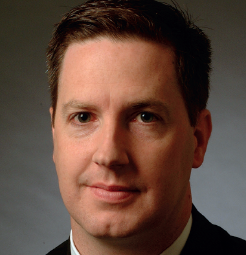 “If you go back to the 1850s, the market today looks absurdly expensive” - David Lafferty

Lafferty, in common with many others, is no fan of CAPE-Shiller: “It takes the worst part of the P/E ratio, which is that it is backwards-looking, and multiples it by 10 because it is typically a 10-year average. It is a terrible way to think of valuations.”

One outcome of the CAPE methodology is that even though the US equity market is rising, CAPE is falling because the earnings trough of 2009-11 is now falling off the back of the calculation. Lafferty argues that the only reason earnings need to be cyclically adjusted is in a cyclical trough, since there is no adjustment for cyclical earnings peaks.

“The Shiller CAPE ratio is really helpful in a year like 2009 or 2010 when earnings troughed. Stocks got hammered but the earnings fell more than the stocks did and the P/E ratio goes up even when the stock market is getting cheaper and cheaper,” says Lafferty.

A better measure of value than CAPE could simply be the median P/E ratio – the P/E ratio of stock number 250 in the S&P500 ranked by P/E ratios. After all, the median P/E was not particularly high during the tech bubble of 1999-2000, even though the weighted mean average was. “The average P/E was driven by essentially two industries – tech and telecoms,” says Lafferty. “It dragged up the valuations of the market as a whole, but the super expensive stuff was very narrowly focused on one area.” But even on this measure, while the median P/E today is not as high as it has ever been, it is close.

Labour supply and demand
Margins have been rising for 25 years, according to a Bridgewater research note on US equity valuations from February 2019: “If margin gains can be extrapolated, then valuations look reasonable; if margins stagnate, then valuations are a bit expensive but not terrible; if margins revert toward historical averages, then equities are highly overvalued.”

GMO’s view is that markets eventually revert to mean long-term equilibrium valuations, meaning margins and profitability in the US will thereby reduce, the only issue being when.

A key factor affecting profitability is labour’s share of profits. This has fallen to extreme lows as globalisation has weakened the power of labour and the lobbying power of corporates has increased, breaking the historic connection between lower unemployment and rising wages. Yet GMO’s Garvey says this could be about to change, pointing to the “first green shoots of wage growth last year”.

Garvey also points to pressures such as rising populism. Moreover, many other key drivers for higher profitability may be unsustainable: lower tax rates provided a stimulus but tax rates cannot be lowered indefinitely; interest rates are likely to be heading back upwards at some stage in the future; share buybacks were driving up earnings per share without a growth in total earnings but companies cannot keep on buying back shares.

Historically, if profitability is too high, competition comes in and profitability will fall for whatever reason. It is a mean reverting series. That is, of course, the nature of capitalism. 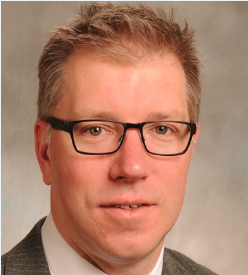 The US market also has a different sectoral bias than other developed markets, which has an impact on measures of valuation. DWS argues that intangible assets such as brands and R&D expenditure are important drivers of company earnings that are not fully recognised in conventional accounts. The US market, including FAANGs and a preponderance of global multinational brands, is fundamentally different from Europe and Japan.

The US market in general has a much higher level of free-cashflow generation than in Europe. According to the April 2019 Croci Focus report from DWS the cash return for the US market is almost double that of the European market. “Post the 2008-09 financial crisis, the US market was able to return to an aggregate level of profitability which has not really been the case for the European market,” says Francesco Curto, co-head of research at DWS. “So it has been able to grow in line with GDP growth, which has not been the case for Europe. It is because of the make-up of the market. Large US companies like some of the FAANGS are at a discount to the market on our CROCI valuations.”

Using its cash-return on capital invested (CROCI) methodology, DWS finds that 44% of the US companies it follows are currently in bubble territory and clearly over-valued (see figure). This compares with 39% for Europe and 20% for Japan. The CROCI methodology was developed by DWS’s parent Deutsche Bank in the 1990s to help institutional clients compare valuations on a like-for-like basis across different sectors and regions.

However, adds Curto: “Relative to history, the number of companies in a bubble is as large as it was in 2000, but the magnitude of the bubble is much smaller.” Although healthcare and financials are clearly undervalued, sectors that are overvalued include consumer discretionary and energy where the level of profitability is low. 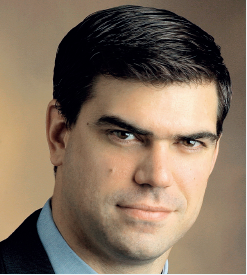 For investors, however, it is not just valuations that matter. “I look at two different layers of risk fundamentals risk and valuation risk. Valuation risk is quite high right now, meaning valuations are stretched,” says Jeff Rottinghaus, portfolio manager at T Rowe Price. But, he adds, it is late in a long 10-year economic cycle, albeit without growth as robust as it has been in previous cycles.

Fundamental risks may be increasing, in combination with increased political tensions and uncertainty about the future economic direction of the US. This might be leading investors to safer, more durable companies trading in some cases at all-time-high valuations versus the market. 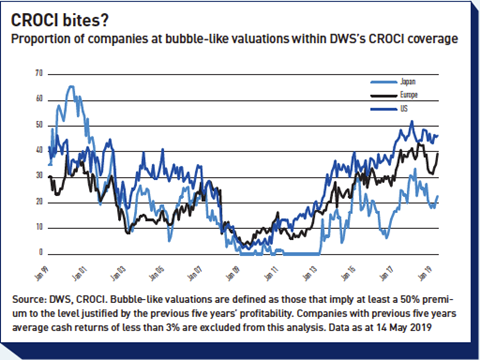 As Rottinghaus puts it: “Do I want to own Pepsi, where there is high valuation risk, or buy a cyclical company like John Deere, which makes agricultural equipment with a large amount of overseas exports to China and uses components from China? We are certainly not selling Pepsi to reduce valuation risk and increase fundamental risk with John Deere”.

So while some US equities may definitely appear frothy, moving away from the bubble may not be reducing the risks.