The US Treasury market accounts for almost a third of the world’s total of government debt at $65trn (€58trn), according to a recent report by the Institute of International Finance, the global association of financial institutions.

That amounts to 104% of GDP – a figure considerably higher than the 90% that economists Carmen Reinhart and Kenneth Rogoff suggested is the threshold above which economic growth becomes progressively impaired.

It does not take account of US President Donald Trump’s grandiose campaigning plans for infrastructure investment and the pro-cyclical tax cuts.

Burgeoning debt levels naturally raise questions about whether investors should be fleeing US government bonds. Perhaps the archetypal safe asset is not so safe, after all.

Some would argue that deficits do not matter. In this view, the fact that the US has seen strong growth while the Federal Reserve has been buying US Treasury bills under its quantitative easing (QE) programme illustrates the point. The biggest threat of rising debt is probably the growth-compromising influence of higher interest rates on debt servicing, which diverts money away from investment. 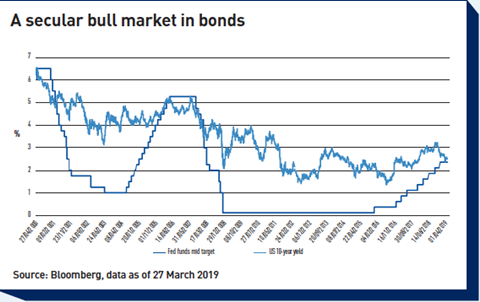 Paul Brain, head of fixed income at Newton Investment Management, says one factor to consider is that the low-interest-rate environment means the interest rate bill is proportionally lower. That means increased borrowing to invest in infrastructure could lead to a higher level of growth and therefore more revenues to pay the interest-rate bill.

Neither is the US alone, though, in having a QE-driven debt build-up. The great paradox of this, points out Francis Scotland, director of global macro research at Brandywine Global, is that some of the countries with the highest debt ratios have the lowest interest rates.

Understanding this conundrum is proving to be a challenge. As Robert Tipp, chief investment strategist for PGIM Fixed Income, says: “Whether it is to counter high debt levels, ageing demographics, or something else, economies appear to need incredibly low rates in order to avoid the undesirable outcomes of further decelerating growth and disinflation.” The impact of an ageing population, in particular, will lead to lower growth but rising debt levels have so far obscured this development.

There is a debate about whether Trump will be able to take advantage of low interest rates to finance grand infrastructure investment. Some, such as some leading progressive Democrats, would certainly argue that he should. But Scotland contends that traditional Republicans are likely to want to keep the already bloated budget deficit in check. It is already under pressure from high social security spending.

However, it is still possible that the infrastructure programme could go ahead. “The markets are usually willing to fund extra government issuance, but at a price. I would expect the yields on longer-dated securities to rise if a plan gains traction,” says Newton’s Brain. 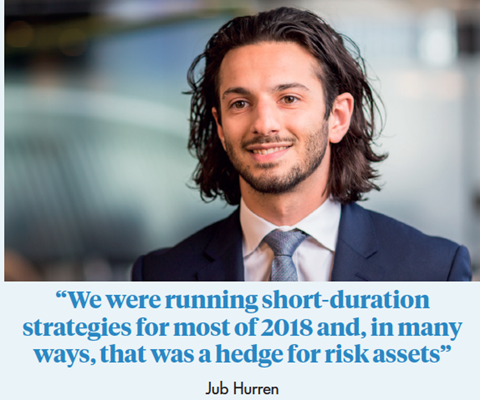 Trying to rationalise the behaviour of US Treasury yields is not easy. The popular perception is that QE depressed Treasury term premia. However, as Scotland points out, actual data shows that bond yields initially rose during the three instances of QE, owing to its reflationary influence. As a result, the expectation would be that winding back QE should depress bond yields by the same mechanism. “The implication is that balance sheet changes have been particularly potent forms of US monetary policy shifts,” says Scotland.

The main attraction of US Treasuries is that current yields are among the highest in the developed world, apart from Greece. Moreover, IMF forecasts of real growth of 2.3% for 2019 and inflation at 2% gives nominal GDP growth considerably higher than average US Treasury bond yields of about 2.6%. This suggests that, unlike Italy, for example, the US may be able to lower debt to GDP ratios by relying on growth alone, rather than by raising taxes and reducing debt issuance.

The past few years, according to Thanos Bardas, a portfolio manager at Neuberger Berman, have been characterised by a renormalisation of monetary policy, leading to US rates of about 2-3%. It is the other developed markets that are still seeing abnormal bond yields.

That did lead to a reduction in overseas buying of Treasuries, driven both by reduction in global growth, and the cost of hedging currency exposures reducing the yield advantage. But domestic US investors, both retail and institutional, have increased purchases. “Any time there is an increase in the funding ratios for US pension portfolios it is leading to an increase in demand for US Treasuries,” says Bardas. “These buyers, unlike retail investors, are not sensitive to price and rates are in any case not at zero.”

US retail investment has been driven by retiring baby boomers who have experienced two falls of over 50% in the domestic stock market in the past 18 years, says Scotland. “As they cruise into retirement, the last thing they want is investment risk, and instead are focused on perceptions of safety in fixed-income, no matter how low the running yield might be.”

Meanwhile, a substantial foreign investor in the form of China, with $3trn of reserves mainly held in Treasuries, has been reducing its holdings over time as it looks to rebalance its reserves and also owing  to its declining current-account surplus. “The Chinese authorities could always use their US Treasury holdings as a bargaining chip but at the end of the day they require a high level of dollars in their portfolio because a high degree of trade is done in US dollars. This will change over time and will lead to less US Treasury demand,” says Brain.

Managers of global multi-asset portfolios need to find high-quality fixed-income assets to provide diversity and protection for portfolios. “If high-quality assets are giving a zero yield, you are not going to buy those,” says Bardas. But, as he adds, while there is demand for such assets, there is $10trn of government bonds that are negative-yielding in Europe and Japan.

But in 2018, holding US Treasuries did not really work as a risk reducer, says Jub Hurren, who runs Aviva Investors’ absolute return multi-strategy fixed-income portfolio. There was a large rise in real yields as well as an interest rate hike and increased government supply. “We were running short-duration strategies for most of 2018 and in many ways, that was a hedge for risk assets,” he says. This year, however, says Hurren, the environment has flipped and they are looking at US Treasuries for risk reducing strategies. In particular, 30-year US Treasury inflation-protected securities (TIPS) are currently offering real yields of 1% compared with negative 2% in the UK and negative 1% in the euro-zone.

As Bardas points out, the real hedging properties of Treasuries should be examined when markets are under stress, or during periods of large drawdowns in equities. “The final quarter of 2018 provided a solid proof of the conjecture.”

President Trump’s behaviour does attract international opprobrium. This carries the risk that US markets could be destabilised as a result but that has not happened yet. Indeed, says Tipp, “the President has an unattractive Fed-bashing tendency, but in this case, he is right. The December rate hike was a mistake but the Fed wanted to show that they could do it even if the President was criticising them.”

Nevertheless, the current elevated yields on US Treasuries pose a challenge for investors.