• Take-up for variable-income drawdown products remains low.
• Risk assets between providers vary between 7.7% and 66%.
• Some products offer protection against longevity.

Since then four insurance companies have developed products. However, these products vary widely, and just a small minority of retirees has opted for them.

The new legislation permits the assumption of investment risk during the benefit phase of DC plans. Until the reform, participants in a DC plan had to purchase full annuities at retirement.

However, the downside is that variable benefits could also decrease. “If you start at 35% plus, you could afford negative returns for some years,” Koopmans says. “But it could also turn seriously wrong, with benefits ending up lower than fixed payments.”

Providers calculate annually how much a participant should receive from their accrued pension capital. Initial income is much higher than fixed annuities because decreasing payments over time are factored in.

The four providers have designed products that differ considerably, with Aegon offering the highest risk profile, investing 66% of the available pension capital in risk assets during the entire benefit phase.

In Allianz’s riskiest investment variant – with purely variable payments – the risk asset allocation is no more than 31%. It also offers a combination of fixed (75%) and variable (25%) benefits, with a risk assets allocation of 7.7%.

At Delta Lloyd, the risk asset allocation is linked to a participant’s risk profile, increasing from 15% in a defensive approach, to 30% in a neutral position, and 45% in a riskier investment strategy. The variation in benefits solely depends on the risk asset holdings. Participants purchase fixed annuities with the remainder of their pension assets.

Delta Lloyd says it will calibrate the risk profile once every five years, and subsequently adjust benefits if necessary. Participants can also indicate if they want their risk profile reviewed, but the provider will adjust the ratio between fixed and variable payments only once a year.

Nationale Nederlanden’s variable benefit product invests 35% in a multi-asset fund with an allocation of almost 20% to fixed income and other liquid assets. 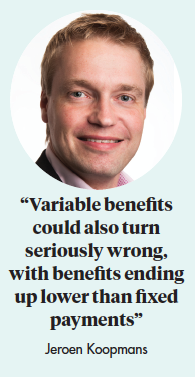 The variable benefits of the Aegon and Allianz products will decrease if life expectancy continues to rise, although Delta Lloyd and Nationale Nederlanden insure against this.

For Aegon, the high equity allocation is deliberate, according to Frits Bart, director of policy. He says: “Participants often have additional DB pension entitlements of at least as much as their DC capital. We consider these to be a risk-free investment. In addition, people have benefits from the state pension, which often represents an equivalent value and can also be seen as risk-free. In our opinion, people need the 66% risk assets in their investment mix as part of their variable payment plan in order to benefit from continued investing.”

The three other providers emphasise the security aspect. “We want the MAN in the street with DC benefits to relax after he has retired,” says Bram Overbeek, head of products and matkets for life and income at Allianz Benelux. “We don’t want people running unacceptable risks and therefore we have aimed at shock-proof and gradual changes without too much risk.”

After 20 years of variable benefits, Allianz customers will no longer be exposed to investment risk. “At that time, the assets available for variable payments would have shrunk so far that investing no longer adds value for them,” says Overbeek. “That’s why we will set the benefits at a fixed level by then.”

Nationale Nederlanden customers will receive fixed benefits from age 85. Delta Lloyd says it will gradually reduce the investable part of the assets to zero from age 85, phasing this in over a nine-year period.

Delta Lloyd is the only provider that will smooth both positive and negative income shocks over a standardised period of five years.

Koopmans of LCP says benefits may fluctuate significantly, particularly in products with a high risk profile. “If equity markets were to drop 25%, a participant with Aegon would lose more than 16% of their pension assets,” he says. Aegon does emphasise the risks of its product in its literature.

Another hurdle is that existing DC funds are geared towards de-risking ahead of retirement, reducing the level of risk assets and assuming individuals will purchase an annuity. This is set to change, however. Aegon, for example, says it will come up with a solution later this year.

The insurer ASR says the lifecycle options in its DC plans will be adapted for continued investing from 2018, and is developing a product for this purpose.

Allianz has recorded the greatest interest for variable drawdown products, with a take-up rate of one in five. The average purchase price for variable benefits is much higher than for fixed annuities at €300,000 against €95,000 on average.

Aegon confirms this picture, reporting a purchase price of twice as much on average. However, its take-up for variable benefits is lower at just 10% and for Nationale Nederlanden the figure is 5-10%. Delta Lloyd declined to provide details.

Overbeek echoes Aegon’s view. “Taking risks must pay off. If interest rates rose to 7% or 8%, few would opt for continued investing.”