10 years on from Lehman: seven trends that have shaped the industry

What has changed in pensions and institutional asset management since the collapse of Lehman Brothers? 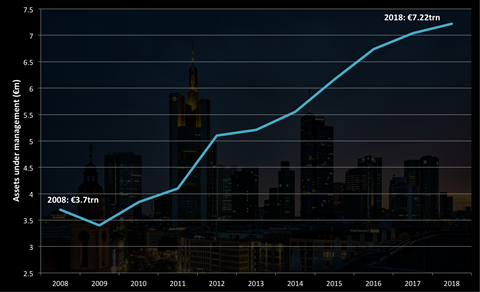 1. Sovereign pension fund asset growth: Norway’s giant Government Pension Fund Global (GPFG) has been the biggest success of the past decade in sheer asset growth terms, having increased in size by more than 250%. This is despite the oil price falling dramatically during 2014 and 2015 (the GPFG is primarily funded by oil revenues). Fellow Norwegian investor KLP – which runs local government pensions – has nearly trebled in size, helped in part by the withdrawal of a number of public sector providers in 2013 and 2014.

2. Dutch occupational pensions consolidate: The dominant Dutch duo of ABP and PFZW have roughly doubled in size as the Netherlands has pushed on with its consolidation efforts. They have been joined in the top 10 by one of the Netherlands’ two metal industry schemes, PMT.

3. PIIGS: In contrast, Spain’s social security fund – the fifth biggest in Europe in 2008 although in reality simply a silo for government debt – has collapsed from €56.3bn to just €8.1bn at the end of 2017 as the country’s government drew down on its reserves. This has cast doubt on Spain’s ability to sustain its state pension system. Ireland also drew down on is National Pensions Reserve fund in the aftermath of the financial crash, converting it into the domestically focused Ireland Strategic Investment Fund, which now manages over €19bn.

4. British DB schemes cashflow negative: The UK’s Coal Pension Trustees , which runs two industry-wide schemes, has also dropped out of the top 10: it ranked 53rd in this year’s Top 1000 with €24.5bn in assets, compared to €33.7bn a decade ago. The pension funds have both been cashflow negative for some time owing to their particular demographics. 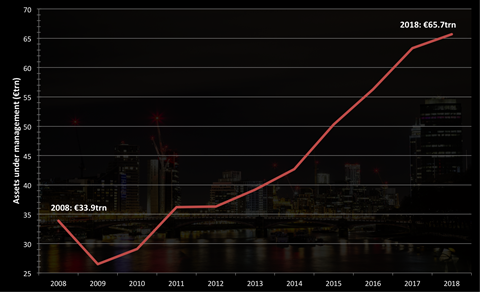 The asset management industry has seen dramatic changes since the collapse of Lehman Brothers, with Europe’s biggest institutional providers in particular changed by problems suffered by investment banks. 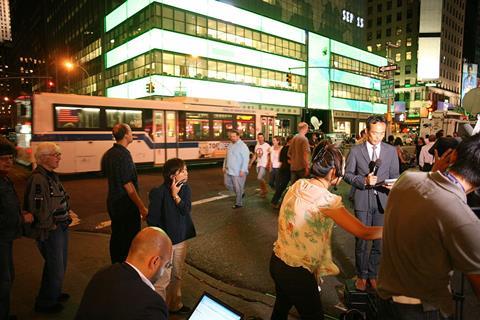 5. Post crisis M&A: The investment arms of Credit Agricole, Société Générale and Barclays all featured in 2008’s top 10. These entities no longer exist after their parent companies were forced to restructure their businesses amid the banking sector problems.

Credit Agricole Asset Management combined with Société Générale Asset Management to create Amundi in 2010. Aided by subsequent major acquisitions, Amundi has since established itself as one of the biggest investment houses in the world, running €1.4trn at the end of 2017.

Lehman Brothers’ asset management arm was sold to its management as part of the bankruptcy proceedings – a move that has paid off, with Neuberger Berman (as it is now known) running €245.8bn.

Meanwhile, BlackRock – which was just outside the top 10 in 2008 – catapulted itself to the top of the European institutional market in 2009 with the purchase of Barclays Global Investors.

Mega-mergers are still a significant feature of the fund management sector: Last year’s deal between Aberdeen Asset Management and Standard Life brought the combined business into Europe’s top 10, while Janus and Henderson also sealed their merger last year to create a €308.8bn company.

6. The rise of LDI: Other factors have helped shape some businesses. UK-based Insight Investment – ranked 20th in 2008 – has specialised in fixed income and liability-driven investment (LDI) at a time when defined benefit schemes have been closing in large numbers, helping the asset manager to increase its asset base more than sevenfold.

Legal & General Investment Management also benefitted from the shift to LDI, but has also seen huge growth in its defined contribution services – its master trust has more than €5.6bn under management – and its real assets business.

7. Dutch pension funds compete for business: APG joined IPE’s Top 400 in 2009 when ABP spun off its asset management arm for regulatory reasons and embarked on a new strategy to take on external business. It would have ranked 6th in 2008 had it been eligible for inclusion. As a standalone asset management entity, PGGM is now also a significant player, with over €200bn in client assets, according to IPE’s most recent Dutch institional asset management survey.

Plus, in this month’s issue of IPE, we look back at lessons learned since the collapse of Lehman Brothers, and ahead to future stresses with a particular focus on asset management regulation.

We also speak to economists and politicians about their experiences and views of the longer-term impacts of the events of 2007-09, including the credit crunch, the banking crisis and the market crash.