Investment returns at many European pension funds came crashing down in 2015 compared with the previous year. Denmark’s ATP was the only exception, posting a 17.2% return.

The €94bn pension fund easily outperformed the rest of the European pension fund sector, based on results announced so far. Its full-year return for 2014 was 6.5%.

The 17.2% return for 2015 came in part thanks to ATP’s Danish equity holdings, which generated 48% – marking a third “stellar” year in Danish equities for the fund, according to chief executive Carsten Stendevad.

Inflation and credit also produced positive returns for ATP in 2015, although the other two risk classes – interest rates and commodities – made losses.

“If you look at our current risk allocation, we are overweight equities and underweight rates and slightly underweight inflation,” said Stendevad. “That is the best representation of our view, and that reflects our view of the market.”

In the Netherlands, returns among the five largest pension funds were relatively weak, with the 2.7% posted by €351bn civil service scheme ABP the highest, although this was down from 14.5% in 2014.

Results at PFZW were at the other end of the spectrum, with the €161bn healthcare pension fund making a loss of 0.1% on investments. In 2014, PFZW reaped returns of 15.5%.

There were large differences between the performance of listed and unlisted asset classes at the five largest Dutch funds.

Property, infrastructure and other alternative asset classes delivered strong results, in the double-digit range, although the schemes incurred losses from their commodities exposure and their extensive currency and interest rate hedges. 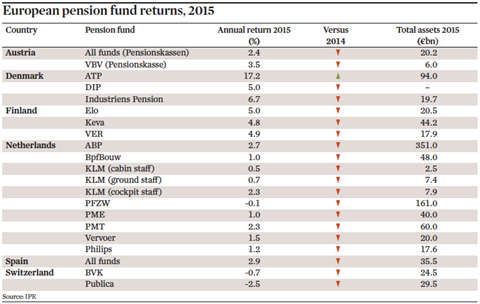 Jan Willem van Oostveen, investment manager at PFZW, attributed the scheme’s negative result to the appreciation of the dollar and the yen relative to the euro.

ABP’s fixed income portfolio returned 3.2%, and PFZW’s credit portfolio 2.6%. Equities at the latter returned 7.9% in 2015, compared with an 11.7% return on developed market equities for ABP and a loss of 4.7% from emerging market equities.

In Finland, 2015 annual returns were closer to the previous year’s.

Equity was the best-performing asset class in 2015 for pensions mutual Elo, with real estate also helping it overcome what the CIO said was an “exceptionally turbulent” market environment.

Swiss funds had a tough 2015, with BVK losing 0.7% on its investments, and Publica reporting a 2.5% loss on its open portfolio.

The BVK, the CHF30bn (€24.5bn) pension fund for the canton of Zurich, still managed to outperform its benchmark thanks to its real estate holdings. These make up just over 20% of its total investments.

“The 17.2% return for 2015 came in part thanks to ATP’s Danish equity holdings, which generated 48% – marking a third ‘stellar’ year in Danish equities for the fund, according to chief executive Carsten Stendevad”

At Publica, returns were wiped out by its 14% exposure to emerging market debt and equities. The fund’s decision to fully hedge its developed markets exposure was a boon, however – worth 130 basis points of return.

Both the BVK and Publica’s results were worse than the average return (positive but less than 1%) that consultancies calculated for Swiss pension funds.

The Swiss federal railways pension fund and the CHF14bn (€11.4bn) pension fund for Credit Suisse beat the average, however, with returns of 1.5% and 1.6%, respectively. Still, that was half the annual return it would have needed to maintain a steady funding level.

PensioPlus, the national industry association, is encouraging investment in the ‘real economy’ to boost yields and protect against inflation. It said the focus on the real economy was also necessary because bonds were no longer a safe haven but increasingly volatile.

In 2015, the largest share of Belgian occupational pension funds’ assets was invested in bonds, at 45%, followed by equities at 34%.