What starts off as a positive move by some individuals can over time morph into a serious problem for the world more generally. Good intentions can in some cases end up unwittingly producing damaging results.

Such a quandary arguably exists in relation to emerging market debt. At present, it makes sense for advanced economy investors seeking a higher yield on their investments to at least dip their toe into the asset class. After over a decade of ultra-loose monetary policy in the developed markets (two decades in Japan), the potential returns available at home in look meagre. With an estimated $15trn (€14trn) of yielding negative returns it makes sense for many investors to shift some of their allocation to emerging markets.

But beyond a certain point, the flow of capital to the developing world could create difficulties. “When the system resets there will be a lot of damage done,” says Markus Schomer, the chief economist at PineBridge.

In broad terms, the risk is that a large volume of such flows could lead to a misallocation of capital. The available returns on emerging market debt might no longer provide an accurate indication of the risks involved. “Bond yields do not reflect default risks any more,” says Schomer.

The potential problems are significant enough for the International Monetary Fund to warn of them in the October edition of its twice-yearly Financial Stability Report. For example, its chapter on emerging and frontier markets points out that: “falling rates in advanced economies have supported debt portfolio flows to emerging markets and a decline in external credit spreads, which has led to stretched valuations in some cases, particularly for lower-rated issuers”. 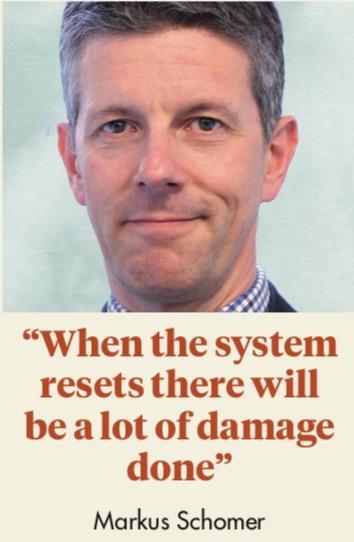 An overvaluation of the currency is one of the main mechanisms through which damaging imbalances could manifest. It could lead to widening current account deficits as exports become more expensive and imports cheaper. Emerging market economies would then be vulnerable to concerns about their weakened state. There are is also an associated risk of runaway inflation.

But although this is a plausible scenario it still begs several questions. For example, although such problems might emerge in the future it does not indicate when they would materialise. The time of reckoning could be a long way off. It is also possible that there are countervailing factors that make emerging economies more resilient.

The caveat should be added that the focus here is not on those emerging markets suffering their own severe challenges. It is accepted in the fixed-income markets that the likes of Argentina (see Briefing p66) Turkey and Venezuela face their own difficulties. The question here is whether emerging market debt more generally is facing a systemic threat.

That does not mean that all the remaining emerging markets are equally vulnerable. Some are stronger than others. But the potential could be there for all emerging markets to face a tougher time because of large capital flows.

Real risks
In some respects at least, the risks are already far from hypothetical. As far back as 2013, many emerging markets suffered what became known as at ‘taper tantrum’ when Ben Bernanke, then chairman of the Federal Reserve, suggested that the US central bank could be about to cut back on its quantitative easing (QE) measures. Five emerging markets with large current account deficits – Brazil, India, Indonesia, South Africa and Turkey – were labelled the ‘fragile five’ as a result.

However, over six years later, there has been on similar panic. A tightening of monetary policy in developed economies looked imminent earlier this year, but the situation reversed. The US Federal Reserve has made three quarter point cuts since July.

“The taper tantrum was about the Fed reversing the size of its balance sheet,” says Roberto Sanchez-Dahl, senior portfolio manager of emerging-market debt strategies at Manulife Investment Management . “We are now moving it in the opposite direction.”

The European Central Bank (ECB) also switched back to more accommodative monetary policy with the announcement of a new bout of QE in September. Then in October the outgoing ECB president of the Mario Draghi said in his final statement that: “an ample degree of monetary accommodation is still necessary for the continued sustained convergence of inflation to levels that are below, but close to, 2% over the medium term.”

Of course the time will come when the central banks start to tighten monetary policy – and the Swedish Riksbank has announced it plans to end its five-year run of negative rates in December – but such a reversal looks way off.

Raphael Marechal, the head portfolio manager for emerging market fixed income at Nikko Asset Management, does not see a shift in QE as likely in the next two or three years but acknowledges systemic problems could emerge in the long term. He is bullish for the short term as liquidity is flowing strongly into the asset class. But accepts that eventually the flow of capital to the emerging world could cause structural imbalances. “What it creates for emerging market countries is that it compresses their interest rates because it also makes their currency become much more expensive versus the dollar,” he says. 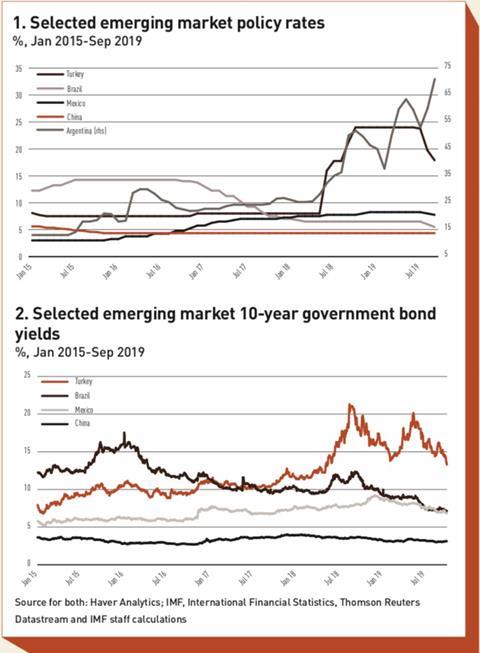 Marechal points to several related ways in which difficulties could manifest themselves. In particular, countries could start suffering from widening current account deficits.

Countervailing forces
Sergey Dergachev, the head of emerging market corporate debt at Union Investment, is also sanguine about emerging market debt. He points to three reasons why it as an attractive asset class at present.

First, emerging market debt is now, on average, investment grade. The days when the universe consisted of poorly rated bonds are over.

Indeed the strength of emerging markets means that financing needs have declined in the corporate and the sovereign sector. This has resulted in lower net issuance levels.

Second, the growth pattern is diverse. Although individual markets could have problems the asset class as a whole benefits from risk diversification.

Finally, he points out there are alternative investments, such as private equity and private debt. These provide another outlet for investors hungry for yield. “Emerging markets face competition from these asset classes,” he says. Besides anything else this acts as a safety valve, helping to curb excessive capital to emerging markets, containing the risk of euphoria in emerging market debt. 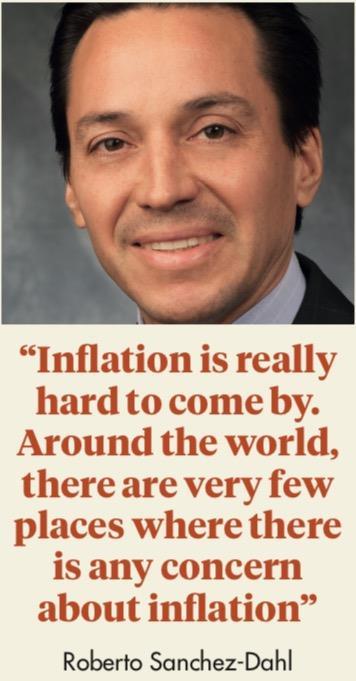 Runaway inflation is one development that could damage the more benign scenarios. If inflation started to take off, it could no doubt lead central banks to raise rates in an attempt to stop it getting out of control. Such a move could trigger a situation where debt burdens increased sharply and capital flows become volatile.

However, Sanchez-Dahl says runaway inflation is unlikely. “Inflation is really hard to come by,” he says. “Around the world, there are very few places where there is any concern about inflation”.

He points to three factors that have a structural impact on inflation. Globalisation can help as goods and sometimes services can be sourced from the cheapest suppliers worldwide. Deregulation plays a role as the removal of unnecessary rules can make it cheaper to supply products. Finally, the impact of new technology, such as information technology, can help keep cost pressures down.

Avoidance
Whether emerging market debt investors can avoid a system reset, will for course depend on its scale. In the worst-case scenario, a full-blown systemic crisis would cause wide-scale damage.

However, leaving aside that possibility there are several paths through which risk could be managed. One already alluded too is timing. It could take a while for substantial imbalances to emerge so getting in and out at the right time will be important.

Another is to avoid those countries which look most vulnerable – that is already having left aside those markets which have severe troubles of their own. Nikko’s Marchal points to several types of countries of which he would be wary. For a start he says that countries with a twin deficit – that is both a budget deficit and a current account deficit – are best avoided.

He also argues that goods exporters are more vulnerable than commodity exporters. The former are more liable to foreign exchange fluctuations as their products are normally priced in their local currency. Commodities exporters, where goods are priced in dollars, would be less vulnerable.

Local currency debt is more vulnerable to currency fluctuations than that denominated in hard currency. As a result, negative yields in the developed world will probably have a greater impact on that segment of the market.

Dergachev stresses the importance of having a selective approach. “You really need to go deep into the credit analysis and figure out how resilient a particular credit could be if the avalanche comes,” he says

So investors in emerging market debt face a difficult balancing act. In the short term, it is clear they can benefit from higher yields but in the longer term it is probably advisable to be wary of systemic risks. The challenge is to make sure they stay in the right place at the right time.