The €3.2bn Dutch Pensioenfonds Delta Lloyd is to close following the takeover of its insurance company sponsor by NN Group two years ago.

Pensions accrual will continue in NN’s collective defined contribution (CDC) scheme, according to the annual reports of both pension funds.

Pensioenfonds Delta Lloyd will close to new entrants from next year. It currently has 13,000 members.

A third option would be a buyout with an insurer, he said.

The board decided against transferring the legacy scheme to the CDC fund as the different funding levels – 126% at Delta Lloyd and 109% at NN CDC – would be an obstacle. 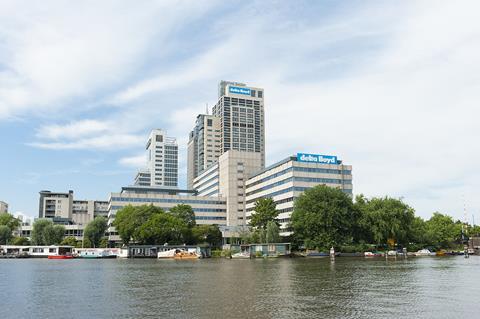 The former offices of Delta Lloyd in Amsterdam

This demographic has allowed NN CDC to implement a much more aggressive investment policy, with a return-seeking portfolio worth 40% of its assets. The Delta Lloyd scheme has 24% invested in return-seeking assets.

In addition, the Delta Lloyd fund is in a relatively strong position to pay inflation-linked bonuses, whereas NN CDC has limited options for indexation given its lower funding level.

Inge de Vries of trade union De Unie acknowledged that the unions had made a concession on pensions during the transition negotiations, but highlighted improvements on pay and labour conditions for former Delta Lloyd staff.

NN’s CDC scheme shares services with ING’s CDC scheme. Both schemes were established following the split of original parent company ING into the separate companies ING and NN Group, in 2011.

The board of NN CDC said it wanted to continue the co-operation with ING CDC for now as both schemes had significant similarities and were facing the same issues.