The decision-making path from a defined benefit to a collective defined contribution (CDC) regime is tried and tested in the Netherlands. But for pension fund executive management, the real work begins once the decision has been taken. What is involved in the management of the transition process?

The Dutch ABN Amro pension fund made the switch in 2014. Geraldine Leegwater, executive chair of the fund, says the transition was a complex project and it was not simple for the management to keep sight of the entire, lengthy process. All stakeholders were affected, including the employer, unions, works council, pensioners’ association, participants’ council and the pension fund’s executive management.

Effective planning is essential, according to Leegwater, to help executive management retain oversight. It also underpins a clear division of roles. “The task of the management is to assess all aspects of the new regime, taking into account the interests of all stakeholders,” Leegwater says.

In principle, the division of roles should be clear. The social partners deal with the pensions regime and the pension fund deals with the execution. The fund must also assess whether the agreement can be put into practice.

“In practice, it is of course hard to ‘disallow’ an agreement that employer and employers both stand behind,” Leegwater notes. In theory, this situation can be avoided by involving the pension fund in the agreement process so feasibility can be assessed from the start. “Legally speaking, the agreement and decisions about the feasibility are sequential items,” says Leegwater. “So if the pension fund is involved in the employer and employee negotiations at too early a stage it will be taking part in a discussion it is not qualified to be involved in. Clear agreement about the division of roles and, above all, the timing, are thus very important.” 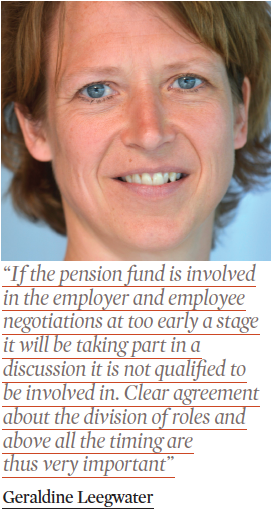 •  Exploration phase. Executive management made a general study of various aspects of the transition including: the legal framework; financial aspects; the experience of other pension funds; and member communication during the transition.

•  Assessment phase. Executive management decided which legal, financial and operational and communication criteria were relevant, the framework within which the proposals would be assessed and how different aspects would be evaluated. The pension fund could still interact with the social partners without overstepping its boundaries.

•  Negotiation phase. The fund entered talks with the employer. “As management you must have clarity over the assessment criteria and the critical values before the negotiations can start,” says Leegwater. “Otherwise you will never be able to make an assessment of any concrete proposal from the employer. Once the assessment criteria have been established and have become intertwined with concrete negotiations it will be difficult for the management to come to an independent conclusion.”

•  Implementation phase. One pitfall was the risk of conflicts of interest where executive staff at the pension fund also work for the employer. “The financial interests of the employer in the transition to a DC regime can be so great that executive management come under pressure, says Leegwater. “This means it can be difficult to weigh the interests of all stakeholders properly.”

Potentially uncomfortable situations can arise if there is no clear agreement on the right division of responsibilities between the parties, although Leegwater concedes that it can be hard to stick to these roles in practice. Unions may seek agreements about previously accrued rights in the pension fund or executive management may be at the table making decisions as the pension agreement takes shape.

This can be avoided by establishing an assessment framework from the beginning that can be used as a reference point for each new negotiation proposal. The fund created a framework to set out specific criteria in four specific areas:

• Legal – including the legal conditions under which the executive management would be able accept the transition to a CDC regime;

• Financial – including the extent to which members can take on risks from the employer. Under a CDC regime there can be cuts if the fixed contribution is not sufficient to meet liabilities and the likelihood of this was an important financial criteria for the executive management;

• Operational – whether the conditions under which existing service levels, as set out in the service level agreement, would remain in place;

• Communication – how the new regime could be explained and would be understood.

To maintain oversight over the complexity of the transition to a new regime, Leegwater says it helps to map out the parameters within which the management will make decisions. “Parameters here literally mean that you define the most extreme possible negotiation outcomes. In our case, one of the possibilities was to close the existing pension fund, and to introduce a new pension fund for future accrual by active members.

“Management knew that the outcome of the negotiations would be somewhere within the parameters in terms of the way the assessment criteria were evaluated.”

Each parameter was scored against the agreed evaluation criteria prior to inclusion in the framework, and the negotiation proposal that was brought to the management table was evaluated according to this matrix of extreme outcomes.

This helped management to maintain oversight over its own assessment criteria throughout the negotiation process and helped prevent evaluating each proposal in relation to the preceding one and losing sight of the whole situation.

Communication is particularly important, says Leegwater. “For most members, pensions are not at the top of their list of interests. On top of that, the introduction of a new CDC regime is often part of a new collective labour agreement. Members mostly pay more attention to possible pay rises than to changes to the pension regime. This is why it is important to assess how the new regime can be communicated to all stakeholders”.

“Co-ordinating communication in terms of timing and content can increase the effectiveness so the members get to hear the ‘story’ from different perspectives. Finally, it is important to make a longer-term communication plan so changes can (repeatedly) be brought to the attention of the members in a phased manner.