Ahead of the Curve: Arch nemeses - value and growth

Value has outperformed growth over the long term, but over the past decade value has endured its longest and one of its weakest periods of relative performance on record. Why is this the case? And more importantly, will value or growth win the next ‘battle’?

Investing in the stock market involves gaining exposure to various risk factors – intentionally or unintentionally. Apart from the market exposure itself (market beta), perhaps the two most widely recognised risk factors are value and growth. In a simplistic explanation, the two sit at opposite ends of a spectrum with value stocks characterised as undervalued companies trading at a discount to fair value and growth stocks commanding richer valuations due to above-average future growth prospects.

Historically, value has outshone growth, the MSCI World Value index having outperformed the MSCI World Growth index by +1.6% per annum over the past four decades. However, unsurprisingly, this outperformance has not followed a straight line (figure 1); value has dominated, with growth interrupting the status quo for a few short periods of strong relative performance, typically illustrated by the TMT bubble at the turn of the millennium. So has anything changed?

The legitimacy of the value premium is and has been a hotly debated topic in academia, with Nobel laureates such as Eugene Fama and Robert Shiller publishing irrefutable empirical results and explanations of its relevance.

One of the most cited works was conducted by Fama and his long-term collaborator Kenneth French, attributing the value premium to the so-called ‘migration effect’. This effect states that value stocks migrate to a more neutral or even to a growth bias due to successfully improving their fundamentals with an accompanying rise in valuation ratios. In addition, value stocks have over the years earned higher income through dividends than growth stocks.

Furthermore, undervalued stocks are simply often overlooked as many investors prefer to invest in more glamorous growth stocks. This behavioural argument rests on the premise that a compelling narrative about what might happen in the future is more appealing than the storyline about why undervalued stocks actually exhibit higher return expectations. 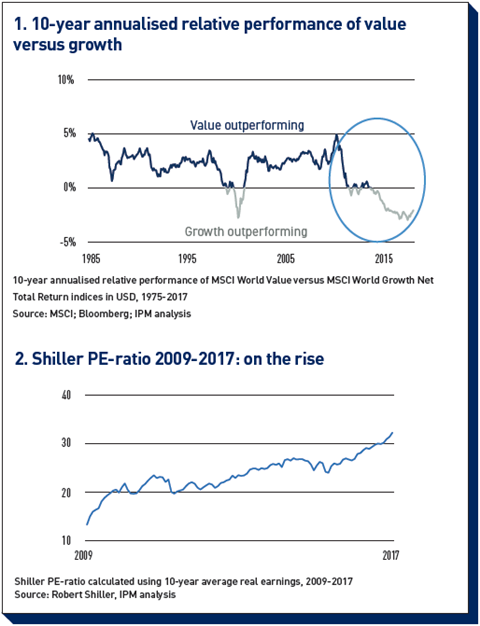 However, as figure 1 shows, what holds true in the long term does not necessarily hold true in the short term. Over the past decade, value investors have had their patience tested as growth has continuously outperformed. We believe that the recent departure of value from the long-term trend can primarily be attributed to four main observations:

1. The rise of indexing: the asset management industry has experienced one of its most profound fundamental shifts on record over the past decade, resulting in the market share of passive rising from 10-15% to 30-40%. As market-cap-weighted index funds exhibit a heavy bias to growth stocks, the demand for these stocks has – relative to value stocks – been boosted without any explicit considerations to fundamentals or valuation levels.

2. The search for yield: investors’ search for yield has resulted in increased equity allocations as some investors have been able to allocate more to equities without breaching their risk budgets. Historically, growth has exhibited a higher market beta than value, although many traditional growth stocks have seen a reduction in market risk since 2008. This has resulted in growth stocks commanding a higher weighting in portfolios applying a risk-weighted allocation, for instance with low volatility portfolios.

3. Long versus short-duration assets: unprecedented low interest rates across the yield curve have rewarded investors disproportionately for holding long-duration assets, like growth stocks, that are expected to deliver attractive cash flows and profits far in the future. On the flip side, shorter duration assets such as stocks in the traditional value sectors – financials, energy and materials – have been less favoured. However, the latter are accordingly less sensitive to the prospect of central bank monetary tightening.

4. TMT 2.0: the early promises of the IT boom of the 1990s have materialised in full force, with technological advancements disrupting numerous business models. Growth stocks are today supported by significantly more solid fundamentals. Nonetheless, a large part of the outperformance of growth stocks during the past decade is attributable to continuously higher valuation multiples. Today’s lofty valuations of growth stocks leave little buffer to absorb potential future disappointments (figure 2).

History has repeatedly taught investors to be humble when attempting to make bold market calls. Precisely when value will start outperforming is difficult to tell, but we are, nevertheless, confident that it will happen, and that the ‘when’ is approaching. Why is this the case?

Investors have, in recent years, put less emphasis on a solid fundamental analysis. We do not expect the hitherto prevailing market environment to continue indefinitely and, as seen during the last months of 2017, investors have again increasingly started to become more selective with fundamentals and particularly the valuation of fundamentals increasingly in focus.

Furthermore, after having experienced one of its weakest periods of relative performance, value is trading at an attractive discount to growth from an absolute perspective.

In the short term, markets can deviate significantly from their long-term fair value, but in the long run mean reversion of valuation levels serves as a gravitational force. What is expensive will get cheaper, what is cheap will get expensive. We do not expect the tailwind for richly valued growth stocks to continue indefinitely and expect to see a gradual rotation from growth to value to start in 2018.