Ahead of the Curve: Return of the information edge

“It ain’t what you don’t know that gets you into trouble. It is what you know for sure that just ain’t so”
Mark Twain

One of the hardest – but most important – things for any investor to do is to try to determine what in markets and the broader economy is structural and what is cyclical. The Mark Twain quotation is used by Michael Lewis in the introduction to The Big Short, his book on the collapse of the sub-prime mortgage bond market, to refer to the certainty among consumers, regulatory bodies, central bankers and politicians that house prices in the US would go on rising forever. For me, Twain’s quotation is a reminder that received wisdom has to be challenged. Indeed, the more people are attached to a truism, the less is required to knock it off course.

One example is the idea that regulation and technology have eroded the ‘information edge’ that investors once saw as a reliable source of returns. Information is now ubiquitous, goes the truism, because companies are forced to declare it to the market fairly, and the digital dissemination of information is so easy, everyone has it at the same time. I disagree: a new information edge is emerging which will be fundamentally different. It is a mistake to assume there is no value in studying information about a company or industry.

New technologies and regulation have brought with them new inefficiencies. The focus here is on three: over-excitement about ‘big data’; the consequences of increased disclosure; and the impact of non-fundamental actors.

Taking the first: vast and accessible new sources of data and ever-faster computers to process them have made it possible for investors to spot trends, identify activity levels, detect emerging price direction, and understand consumer feedback on new products – all to get a march on other market players. But is this strategy a genuinely repeatable source of returns? Big data means much, much more data and with it, the risk of mistaking mere noise for valuable insight.

In an example from the political world, there are more opinion polls than ever before, yet there have been more unexpected election results over recent years. The wealth of data should have led to far better predications, instead of just the wealth of pollsters.

Part of the problem may be in presentation. Too much credence might be attached to it simply because of the way it is packaged. Big data and the artificial intelligence needed to interpret it are fashionable and appeal to a desire for empirical proof. But they are not always right and investors may leave false or misleading interpretations unchallenged, trusting hard data instead of gut instinct.

Furthermore, most data have a short shelf life as they use rapid feedback channels that decay quickly: social media, geo-spatial imaging, newsfeeds and transaction data, for example.

Finally, and most importantly, the greater the investment and attention given to big data by market participants, the more likely that the insight it offers will already be in the price. Big data could be a big let-down.

Next is disclosure. Consumers and regulators want more, assuming that more information means more informed choices and better understood risks. But the sheer volume of information being pumped out in response can have the opposite effect. 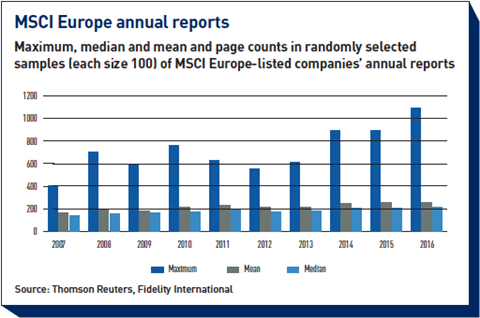 Important information can be buried under the weight of what might possibly, in certain circumstances, be important. Most modern audited documents, annual reports, regulatory filings, terms and conditions and safety feature legislation have grown inexorably in size. It is hard to believe that investors’ understanding has grown by anything like the same extent. Discretion is the better part of valour.

Finally, consider what could be called the laziness of market participants. One of the financial market’s most valuable methods of transmitting information used to be as an aggregator of investors’ views of the future. The deeper and more liquid the market, the better the signalling mechanism. Long-time investors hand down lessons on ‘the wisdom of crowds’ – the smart, efficient market that moves long before clunky analysts have the information that they need to work out why.

What is fascinating is that the more investors, regulators and central bankers have unquestioningly accepted the idea of market wisdom, the less they have examined the relationship between facts and the prices. In other words, facts are often expected to conform to the price and not the other way around. Valuations are overlooked and the attributes of a stock are regarded as more important than the company in which it confers a share. Put simply, the more someone prizes the price and its recent behaviour, the less they will value even the basic fundamentals of the company, its industry and its likely prospects. A crowd of lemmings is not usually wise.

In an age when investors are drawn ever more to short cuts, there is an advantage to doing things the long way. There is a value in deploying human capital as well as technology. Take an example from the clothing industry – fast fashion. Sales of cheap, on-trend outfits knocked out in low-cost locations were booming but the lustre has worn off. The commercial edge is now in craft, provenance, and quality but where social media is opening up new, more broadly addressable markets and sleek technology interfaces have modernised the customer experience.

That is why the new – and potentially most valuable – edge for investors could lie in assembling information about the long-term outlook for a company, the sector within which it sits, the capital allocation which will drive returns (over the coming years rather than the next weeks and months), and the degree to which the company has a cultural safety net. If this seems painstaking, pedestrian and, frankly, old-fashioned, it is possible to take comfort from the fact that most market participants are mesmerised by ever-faster spinning data sets, unaware that a new inefficiency is taking shape around them.