Divergent monetary policy activities by major central banks are having impacts right across yield curves. For investors, this means an agile investment strategy will be vital to the overall performance of their bond portfolio.

The European Central Bank’s (ECB’s) expansion of quantitative easing in 2015 saw investors send 10-year German government bond yields to historical lows around 0.05% in April 2015. The latest announcement from the ECB of purchase expansion in terms of assets, and extension in terms of time, contributed to keep yields extremely low. Conversely, a mildly stronger US economy has seen the Federal Reserve (Fed) initiate a long anticipated tightening programme.

Understanding the impact of previous hiking cycles on bond markets can provide a valuable guide for investors seeking to understand how to position their portfolio.

Return patterns in US and euro-zone bond markets
For example, between 1995 and 2015 the Barclays US Treasury (UST) index returned 217%, but with significant variability across the curve; the one–three-year index returned 125%, while the 10-year plus index returned 410% (figure 1).

A similar pattern was observed in the euro-zone government bond market. From the launch of the single currency in 2001 to the end of 2015, the Barclays Euro Treasury index returned 126%, compared to just 72% for the one–three-year index and more than 195% for the 10-year plus index1.

Figure 1 illustrates the importance of choosing whether to invest across the entire yield curve or only in certain segments.

With developed country yields on a downward trend since the mid-1980s, it is no surprise that greater duration risk has led to higher returns. However, investors in longer-dated bonds did not see better returns in every year, and there has been no guarantee that the fixed income environment would be favourable. Duration risk was also accompanied by higher levels of volatility, not just in absolute terms but also relative to the returns generated (figure 2). Indeed, per unit of return, the volatility of the 10-year plus indices was more than twice that of the one–three-year indices. 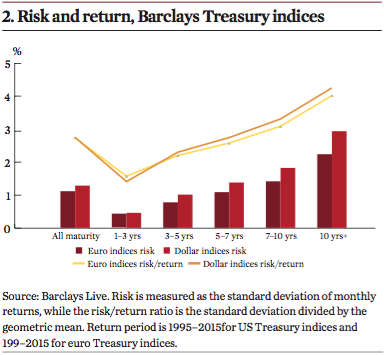 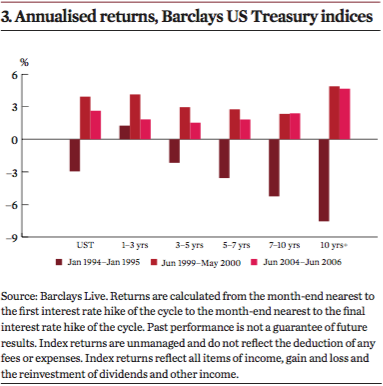 US Treasuries during past Fed hiking cycles
With the Fed currently engaged in policy tightening, it is useful to consider how the markets behaved during previous hiking cycles. All recent Fed hiking cycles (1994–95, 1999–2000 and 2004–06) have been characterised by rising yields and a flattening of the curve.

But the experience for Treasury investors has varied significantly. As illustrated in figure 3, the 1994–95 hiking cycle was clearly the most difficult; there were losses across every curve segment apart from the 1–3-year sector, and the magnitude was most pronounced at the longer end of the curve.  By contrast – somewhat surprisingly – all the indices saw positive returns during the two most recent hiking cycles. While the best of these came from the 10-year plus sector, the one–three-year index also performed strongly during the 1999–2000 cycle2.

What does this mean for investors?
Of the last three hiking cycles, the current situation appears most similar to 2004–06. Once again, rates are starting from a low base, with the pace of rate hikes likely to be much slower than in the mid-1990s.

Key uncertainties remain, however. The current US economic recovery is already longer than some post-war expansions, while there is little sign of an immediate dangerous build-up of inflationary pressure. On this view, the current cycle could be short-lived or even reversed. However, the market has been pricing a more dovish path for interest rates than projections published by the Fed (figure 4). The risk remains that since long-term inflation expectations are low by historical standards (figure 5), factors like a rebound in commodity prices or pick-up in wage growth could cause a sharp rise in yields. In such a context, exposures like US TIPS could be an interesting building block to consider adding in a portfolio. 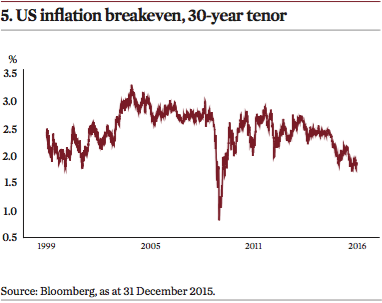 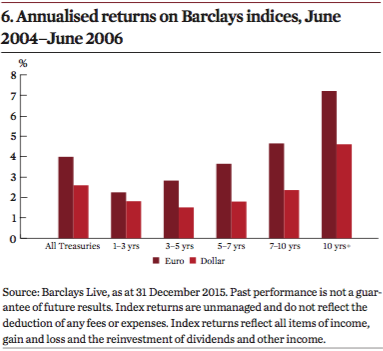 Whatever ultimately materialises, the potential for fixed income returns to vary markedly across the curve is significant. As a result, the flexibility to invest in specific segments of the yield curve will be crucial for investors navigating this environment, primarily to avoid exposure to segments of the curve where yields may be negative. Financial tools like ETFs can offer the flexibly needed to manage fixed income exposures as the cycle progresses.

As illustrated in figure 4, Fed funds futures now imply fewer than two hikes this year, which is at odds with the FOMC’s medium-term projections. The dots show each individual governor’s expectations of where the Fed fund rates could be at different time horizons. Meanwhile the red line shows what financial market participants expect through the futures market, levels clearly lower than the median FOMC projections. 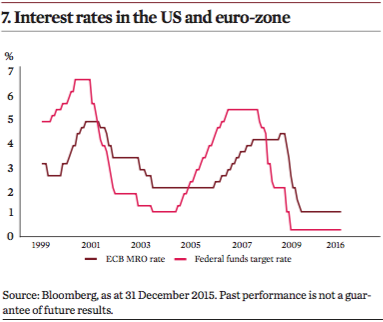 Behaviour of euro-zone government bonds in Fed hiking cycles
So how will a US hiking cycle affect euro-zone government bonds? Although not always the case, returns from the two markets during the 2004–06 cycle were similar (figure 6). In many ways this is unsurprising. Developments in the US naturally influence other markets, and the economic cycles of the two regions were broadly aligned from the creation of the euro until the sovereign debt crisis in 2011. This point is illustrated by figure 7, which shows the official interest rates set by the Fed and ECB.

However, while both regions currently have very low inflation, the labour market recovery of recent years has been much more complete in the US. Consequently, the Federal Reserve now feels reasonably confident that wage pressures will eventually build, thereby justifying a tightening of monetary policy. By contrast, the ECB has adopted a large-scale quantitative easing (QE) programme that is scheduled to last until March 2017, while pushing short-dated interest rates below zero.

Although it is likely that US and euro-zone markets will always be correlated to some degree, unless the monetary policy cycles realign the correlation between the two will probably be weaker than in the past. For example, over the last two years, short-dated Treasury yields have increased as the Federal Reserve has moved towards tightening policy. Such a move would normally lead to an increase in short-dated euro-zone yields, but this has not been the case.

Over the course of 2016, it is likely that euro-zone government bonds will not only be influenced by macroeconomic developments, but also by the impact of QE on the supply/demand technicals of the market and by any change in the modalities of the programme. Having the flexibility to invest in specific segments of the curve will be crucial in navigating this environment, in particular seeking funds that avoid exposures to segments of the curve where yields are now negative.

Depending on risk appetite and individual investment goals, investors could consider the following strategies to improve outcomes:

• Go further along the curve. Harvest the term premium (outright or duration neutral) by extending the maturity of investments.
• Go deeper into credit.  Harvest the credit risk premium all the way down to the high yield universe.
• Diversify into global assets. Diversify portfolios away from region-specific risk to US government and Treasury bonds, and also higher beta options like high yield, emerging market debt and global convertible bonds.

Agile duration management with ETFs
ETFs play an increasingly important role in the bond market. They offer liquid and cost-efficient access to specific segments of the yield curve, and provide diversification across hundreds of bonds in one easy trade.