Investment in China generates huge excitement, despite the concerns about rising trade tensions with the US. Chinese authorities are taking down barriers to foreign ownership of Chinese firms at a rapid pace. This is consistent with their goal of transforming the economy from investment-led to consumption-led, which requires foreign entities. The country offers substantial growth prospects, compared to developed and emerging markets. The case for China is stronger than ever.

A significant attraction for global investors is that China’s authorities and firms are ramping up their efforts on sustainable investing. Chinese regulators are enforcing stronger requirements in terms of environmental, social and governance (ESG) and companies are striving to keep up. They recognise the importance of these not just to investors, but to their domestic customers too, who are becoming more sensitive to sustainability. This is perceived as a plus for pension funds, most of which nowadays put sustainability at the top of their agendas.

However, there is an issue investors should pay attention to. China remains a highly authoritarian regime. Studies carried out by Human Rights Watch, Amnesty International, the United Nations Human Rights Council and Reporters Without Borders all highlight the Chinese government’s woeful human rights record. While it is problematic to interfere in how a country treats his citizens, basic freedoms and human rights should be upheld as universal principles, including investors.

Two high-profile cases of alleged human rights violations are the ongoing protests in Hong Kong and the treatment of Muslims in the Xinjiang region. Chinese authorities are attempting to curb democratic rights in Hong Kong, where the local government has tried to pass an extradition bill that would effectively put the citizens of Hong Kong under the jurisdiction of mainland China. In the region of Xinjiang, there have been numerous reports of abuses towards hundreds of thousands of Muslims within so-called ‘re-education’ camps operated by the government.

Investors who are serious about ESG should ask themselves about their China strategies. They may contend that their investments are not linked to any human rights abuses but investing in the country should be weighed against ESG principles. 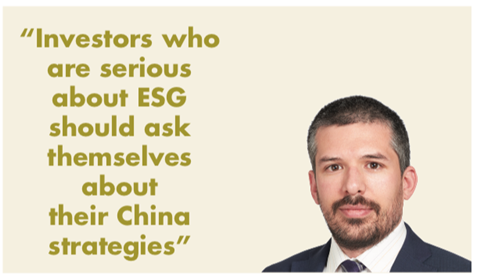 There are many reasons to invest in China assets. However, ESG investors should engage and pressure the right institutions and organisations in relation to human rights.