• Risk parity gained popularity with institutional investors after the extreme fluctuations of the global financial crisis
• AQR’s initial goal was to have multiple strategies that could independently generate positive returns over the long run
• Risk parity began to grow as a standalone offering when clients asked whether the team was incubating any ideas of interest to an institutional portfolio
• In practice, risk parity is an actively managed allocation

It has been a tough year for risk parity. Not necessarily in relation to performance – although many strategies have struggled this year – but in terms of reputation.

Numerous media reports have laid a good measure of the blame for the market’s volatility early this year on quantitative strategies, with risk parity often at the top of the list.

“Oh, to have the powers ascribed to me,” says Cliff Asness, the co-founder of AQR Capital Management and the investment strategy widely regarded as the original version of risk parity. In a comment on ‘Risk Parity Derangement Syndrome’ during the downward market in early 2018, Asness noted that although it is reasonable to assume that risk-parity portfolios might sell during periods of higher market volatility, that critique is a purely a  formal one, and one that is wide of the mark.

That is because “size matters”, Asness wrote. There simply is not enough capital in strategies that pursue risk-parity approaches for their transaction activity to affect global equity markets.

In his comment, Asness did not provide a detailed rebuttal, instead deferring to colleagues, “far less belligerent and snarky” to explain why risk-parity and trend-following strategies are not only not to blame for this year’s market gyrations, but offer institutional investors a rigorous framework for approaching asset allocation at a time when some fundamental factors are undergoing significant change. In a word, when risk is back with a vengeance.

In a written commentary, AQR’s Michael Mendelson dispatched the notion that quants or “the machines” are responsible for increased volatility. The issue revolves around timing and magnitude. In fact, risk-parity strategies typically sell after – not during – a spike in volatility, Mendelson says. As for magnitude, he says, it takes a lot to move big global stock markets, and the size and trading speed of  risk-parity strategies “just don’t get you there”.

Risk party gained popularity with institutional investors after the extreme fluctuations of the global financial crisis, so starkly illuminated that many institutional portfolios were more exposed to equity risk than their managers realised. The strategy evolved from the AQR principals’ efforts to seek to capture the return potential of being long liquid markets around the globe, says AQR principal Yao Hua Ooi.

The journey began with the AQR team constructing their long markets portfolio using the same techniques they applied in building the market-neutral multi-strategy portfolios that were the heart of the firm’s alternative investment business. “From our background designing multi-strategy alternatives portfolios for institutional investors, the core objectives were diversification and risk management,” Ooi says. “That is how we had always designed alternative strategies and portfolios.”

The initial goal was “to have multiple strategies that could independently generate positive returns over the long run”, Ooi says, combined in a way that was well risk-managed and well risk-diversified. “Building portfolios of alternative strategies, you don’t think of how many dollars need to be allocated to each strategy in notional terms. Instead, you think about how much risk you want to allocate to each of the individual strategies.”

When the team applied that lens to traditional asset classes a few things stood out. “The most important was allocating to different asset classes based on their risk contribution, as opposed to their dollar contribution in a portfolio, because the major asset classes have very different levels of risk associated with them,” Ooi says. What emerged was the proto-risk-parity fund, the Global Risk Premium strategy, comprised of long positions in a range of liquid asset classes, including stocks, bonds, commodities and credit exposures, with capital allocated based on measures of risk commonly used in the alternatives space that sought to build a portfolio of components that were diversifying to one another.

Risk parity began to grow as a stand-alone offering when some AQR clients asked whether the team was incubating any ideas that might be of interest to an institutional portfolio. Allocating capital to be long liquid-asset classes based on risk proved to have an intuitive appeal, Ooi says.

But there is an additional layer of analytical rigour underpinning AQR’s risk-parity approach that too often gets overlooked amid the headlines seeking to allocate culpability for market fluctuations. “AQR’s investing philosophy is based on the expression ‘systematising fundamental insights’,” says John Huss, a principal at AQR. Whether it is hedge funds the firm runs, or risk parity or the global risk-premium strategy, “everything we seek to do here is oriented around systematising some set of fundamental insights”.

In the case of risk parity, three key insights are at work, Huss says. The first, is that despite all the capital allocated to the class, “equities aren’t the only game in town”, he says. “Each of the major liquid asset classes – stocks bonds, commodities, credit spreads – have positive expected returns over the long term,” he adds. In fact, Huss says, “once you adjust for their level of risk, you can’t necessarily tell them apart – each is about as good as the other in terms of their ability to generate risk-adjusted returns”.

While this might seem to suggest that one asset is as good as any other, the second insight underlying AQR’s approach to risk parity is that diversification is possible. Even though long-run risk-adjusted return potential is quite similar, “the various asset classes have different drivers of risk and return so they’re diversifying relative to each other”, Huss says.

The third insight might seem to need no explicit statement – risk management matters. But the practical implications flow directly from first two points. “Even if you think of yourself as a truly long-term investor, with no interest in timing the market,” Huss says, “if you don’t manage risk, the markets end up timing you.”

In short, the risk-parity philosophy espoused by AQR highlights the importance of having a plan to manage exposures through the most turbulent market environments. “If you don’t have a plan, it’s all too likely that you’ll end up needing to reduce risk after the horse has bolted,” says Huss. It is illuminating to consider that proposition from the vantage point of long-term performance: “Even if you do manage to hold your position steady throughout the storm, you’re typically ending up dramatically over-weighting that turbulent period in your track record, because you’ll be concentrating your portfolio exposure if you’re not managing risk along the way,” says Huss.

To avoid being timed by the markets, AQR manages risk exposure on an ongoing basis. The details of how the firm does so are proprietary, but in general hinge on the way AQR defines risk, the factors the team considers in defining and monitoring risk, and actively managing portfolios to maintain the risk exposure to each asset class in accordance with the strategy mandate and any applicable client requirements as markets fluctuate over time.

The goal is to “build a portfolio that’s better diversified across various risk and return sources, certainly on average”, says Huss. “But we don’t want to stop there,” he adds. “We also want to try, if we can, to keep it more consistently diversified through time and then manage risk through time, so that no one year matters too much or more than it absolutely has to.”

What that means in practice is that risk parity is not just a set-it-and-forget-it bucket, but an actively managed allocation. “In order to stay risk-diversified strategically, you actually end up having to be active in managing the portfolio,” says Ooi. Those changes, however, tend to be relatively modest in AQR’s risk-parity strategies – a result of the firm’s philosophical approach to defining what constitutes risk, in tandem with its quantitative rigour in analysing how various risks affect asset markets. 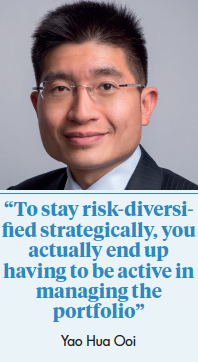 “We think of risk as a multi-dimensional or multi-faceted concept, that can be measured in more ways than saying how much markets are moving day to day,” says Ooi. While volatility is an important measure of risk, AQR also takes various scenarios into account, including more common tools such as downside exposure scenarios, while also seeking to quantify the risk of sudden market shocks which are often not reflected in recent volatility data. “We want to use multiple angles of measuring, managing and assessing risk, so the portfolio we end up constructing can be resilient to actual outcomes.”

What AQR has found by managing risk over time is that markets have fat tails. “There’s a higher frequency of major events than you might expect, than if returns in different markets were normally distributed, which is not the case,” Ooi says. That realisation animates AQR’s implementation of the risk-parity philosophy, which boils down to being prepared for anything. “The way we think about markets, we are not making predictions on what exact events could happen in the next 12 months,” he says.

The AQR team takes a multi-pronged approach to assessing risk. “What we find helpful in thinking about stress tests is trying to use as much data as possible from as wide a range of markets as possible, going as far back as we can, in order to get a sense of what large shock markets over relatively short periods of time, have looked like in the past,” Ooi says. “That’s a starting point.”

The additional analysis seeks to put an asset class in relevant context. A good example, Ooi says, is developing a risk measure for inflation-protected securities. “In the US TIPS [Treasury-inflation protected securities] market, historical data doesn’t exist much beyond the last 20 years, and that’s been a pretty benign period for inflation,” he says.

To develop a scenario for how TIPS might behave if inflation returns, AQR looks at US consumer price index (CPI) data going back a much longer timeframe, as well as at how nominal bonds have experienced shocks in the US Treasury market, where data is abundant. “Using those two inputs, we can try to come up with a plausible drawdown scenario that we can use in our risk management.”

The markets this year have reminded investors that risk can threaten reward on any given day. Risk-parity thinking provides a systematic way to scan the risk horizon. “It’s an idea that has caught on,” says Ooi.