Letter from Australia: A question of gender imbalance

Statistics offer a snapshot into the real world and they reveal a depressing picture of gender inequality in Australia’s superannuation system.

They show that Australian men have A$282bn (€183bn) more than women in their superannuation accounts; that one in three women retire without super savings; and that women with a super account will retire with about 40% less super savings than men.

Australia is a country with a sophisticated retirement savings system that has accumulated more than A$3trn. But the system is imperfect – about half of the working population is not getting the full benefit of compulsory superannuation.

Glen McCrea, deputy chief executive of the Association of Super Funds (ASFA) says latest Australian Bureau of Statistics figures show that the average super balance is A$168,500 for men and A$121,300 for women. While there has been improvement since ASFA first looked at the super gender gap in 2003-04, McCrea says unforeseen events can derail such trends. He points to Australia’s policy of early super release, in response to COVID-19.

“We know nearly one million Australians took out money and now have A$1,000 or less in their super,” he says. “We need to look at this through the prism of what we need to do next.”

According to global research undertaken by HESTA, a A$58bn industry super fund with 880,000 members, Australia lags behind its peers in the developed world in looking after its female population. HESTA is uniquely placed in assessing women’s concerns, as they make up 80% of its membership.

Mary Delahunty, HESTA’s head of impact, tells IPE: “Most advanced and contemporary pension systems have some measures to compensate women who take time out of work to raise the next generation. We need some ability to be able to value unpaid caring work.

“In global research I undertook in 2015, Australia, Mexico and Israel were the only three countries that didn’t provide some form of compensation [to women].”

Most other countries prop up women’s retirement savings either through contribution to a defined benefit system, as in Europe, or a compulsory defined contribution, as in Chile, she says.

The Australian government is drawing up what is known as Your Super, Your Future legislation, in response to a lengthy Retirement Income Review (RIR) completed in 2020. Proponents hope that it will adjust the system to improve the lot of Australian women.

This March, the federal government created a women’s economic security ministry as part of a cabinet reshuffle. The minister, Jane Hume, is a former executive with AustralianSuper, the country’s largest super fund. The new responsibility has been added to her current portfolio of superannuation and financial services.

Women face two fundamental barriers – lower wages, more so in female-dominated work sectors, and interruption as they raise children or care for others.

“We have a system that is predicated on the time you spend in the workforce, and when you account for the gender wage gap, a lot of our members start off behind their male counterparts – and they will never catch up,” says Delahunty.

In the healthcare sector, she says, men earn an average of A$6,000 a year more than women, for the same job.

Gemma Pinnell, strategic engagement director with the trade body, Industry Super Australia, told IPE that policy solutions already exist within the Australian super system. “The government should be looking at the settings of the super system to see how the inequality can be addressed,” she says.

“For one, the A$450 cap should be removed (employers are exempt from paying the universal super guarantee (SG) levy on weekly earnings of A$450 or less.”

She explains that, historically, the rationale around the cap was that it would lessen the administrative burden on employers of having to do small payments. “But with the introduction of electronic payment systems, we believe arguments  against small payments are well and truly outdated.

“The policy affects people who work multiple and part-time jobs – and these are more likely to be women. Generally, part-time workers are not paid super. We advocate that super should be paid on every dollar earned.”

The retirement income review notes that if the A$450 cap was removed, it would benefit about 300,000 Australians, says McCrea. “We know that 63% of them are female. In general, 46% of female employees in Australia work part-time, as opposed to 20% of men.”

Advocates also want to see the super guarantee charge (SGC) paid on parental leave. It is the only form of leave that currently does not attract the levy.

Since 2011, parents, usually a mother, get tax-payer-funded pay for 18 weeks at the rate of the national minimum wage on the birth of a child.

Pinnell says ISA research shows that the gender imbalance gap emerges at the age when women start having children. Many women typically return to work part-time.

ISA modelling shows that removal of the A$450 cap would cost employers A$50m annually, while payment of the SGC on paid parental leave costs A$250m a year to the public purse.

Pinnell says these figures show that the cost of removing the income cap and the super on paid parental leave is affordable.

Some in the industry agree that the cost can be offset by other measures, such as possibly clawing back tax concessions paid on very high balances.

McCrea says: “In our pre-budget submission to the government, we say there is an opportunity to stop offering tax concessions to super savings above A$5m.” The RIR has identified 11,000 people with more than A$5m in their super accounts. 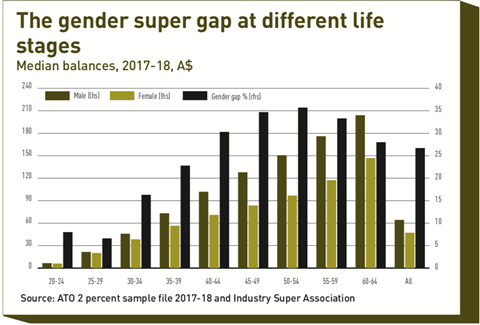 One of these is the low-income super tax offset, where the government pays up to A$500 to help Australians who earn less than A$37,000 a year save for retirement.

Delahunty says: “If our members do not have the money for retirement, society has to pay to support them. It is either the public pension system or private superannuation savings.”