Australia’s workforce of 13 million-plus is set to see employer contributions to superannuation increase from July – seven years after the last rise.

An increase in the superannuation guarantee (SG) from its present 9.5% level to 12% was first legislated a decade ago by the then-Labor government, under the Superannuation Guarantee (Administration) Act.

Since the Liberal-National Coalition came to office in 2013, successive governments have been walking a political minefield on the issue.

To increase or not to increase is a dilemma for the government.

As former treasury official Michael Callaghan notes in his Retirement Income Report for the government, published last year, the retirement income system is a source of considerable public debate. 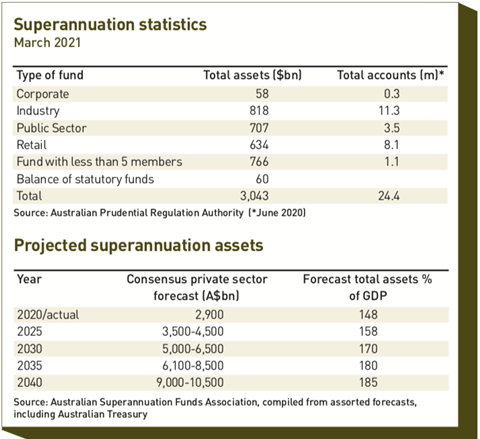 “This reflects the system’s importance to the Australian people, the economy, and the many firms involved, particularly those in the superannuation industry, which manages nearly A$3trn [€1.9trn] in assets and generates fees of more than A$30bn per year,” he says.

Stakes are high, he writes, because changes to the system have implications for all involved: people, in terms of the level of their working life and retirement income; and superannuation funds, in terms of the assets they manage.

The Liberal-National coalition has stalled proposed SG increases. The advent of COVID-19 presented a perfect excuse for the prime minister, Scott Morrison, to rule out an increase from 2021. This was on the grounds that the country could not afford to impose an additional cost on employers during an economic crisis.

But with the economy roaring back with 3.1% growth in the first quarter of 2021, and the unemployment rate dropping to 5.6% – down from 6.6% – such reasoning has gone out of the window.

The Coalition has yet to formally announce what level of SG levy will apply in July, the scheduled date for rises. However, treasury sources confirm that an increase will be included in the 2021-22 federal budget that, at the time of going to press, was scheduled to be unveiled in May.

The reason? The government is facing too many political fires – climate, women’s issues and slow vaccine rollouts. So a fight with the super industry is one it can do without.

The super industry wants, and expects, the government to implement the entire 2.5% increase proposed – at an annual 0.5% increment until 2025.

Most of industry super funds support lifting the current SG rate. AustralianSuper says that, for an average member, it is estimated that increasing the SG to 12% could mean retiring with an additional A$40,000. For someone new to the workforce and the fund, it could mean an extra A$90,000.

Implemention doubt
But whether the government will sanction the full 2.5% increase remains in doubt.

William Mackey, senior associate with the think-tank, Grattan Institute, told IPE: “One option for the government is to continue the increases as planned to 12%.

“Another option is to stop at 10%. And a third option is to give employees the choice to take the increases between 9.5% and 12% either as super or as wages.”

Russell Mason, Deloitte’s national leader of superannuation consulting and advisory services, says: “We are reasonably certain the 10% will go through, but whether the other increases will follow is a matter for the government in power at the time.

“The question is whether the government will hold back some of the planned increase or stop future increases. We are certainly supportive of [the increases] because we believe 12% will go a long way towards a good retirement income for people once they cease work.”

Some economists and academics have asserted that an increase in the compulsory contribution would suppress wage growth.

Mackey says that increasing the super guarantee to 12% would cost A$2bn a year in tax revenue and be “heavily regressive”.

He says: “We looked at more than 80,000 employee agreements and found that, whenever the SG went up, wages did not rise by as much as when there was no increase.

“At least 80% of the increase to the SG came from wages, and that figure is likely to increase in the longer term.

“When you increase the SG you are reducing the amount of money that people take home as wages, because those wages go into super accounts. We estimate that somewhere around A$15bn in wages would be foregone if the rate goes up from 9.5% to 12%.”

The Australian Council of Social Services argues that, in the absence of fundamental reform of super tax concessions, increases to compulsory super contributions beyond 10% would be of doubtful benefit to people with low incomes.

Influential figures, including Philip Lowe, governor of the Reserve Bank of Australia, have chimed in with the view that SG increases come at the expense of wage growth, spending and employment.

Mason says: “We understand the economic arguments. But for people to reach an adequate level of retirement savings, we believe it is important that the SG increases.

He says: “Will employers take an SG increase into account on 1 July when looking at staff salary increases? My experience is ‘yes’.

“At half a per cent, an SG increase doesn’t mean that employees won’t get a [wage] rise. But there may well be some offset for what the employer has to pay in for the additional super guarantee.”

Innes Willox, chief executive of employer group, Australian Industry Group, said there are arguments to phase in a rise: it will lift retirement incomes and national savings and reduce longer-term pressures associated with an ageing of the population.

Willox, who sits on the board of AustralianSuper, adds that with the recovery of the economy proceeding better than expected, the case for delay is less convincing than six months ago.

If the government honours the SG increase timetable, Australia’s pension savings pool will exceed A$4trn in four years’ time. Australia will then rank behind only the US, Japan and the UK, in terms of the largest pension savings in the world.