Markets seem worried there is too much consensus around, and are nervously looking for hidden dangers. The bond market has sensibly priced in rate rises from the US Federal Reserve later this year but financial markets are generally still relying on plenty of loose money from elsewhere – namely, the European Central Bank (ECB) and Bank of Japan.

December PMIs across the globe were weak or weaker than expected. Unfortunately, for market sentiment at least, the US printed the weakest number, with China not far behind. Global leading indicators have edged lower and the outlook for the world’s economic engine is underwhelming.

While not necessarily predicted at the start of 2014, the spectacular fall in the oil price can be probably be explained, ex-post, in a rational way. It is much harder to work out why global bond yields fell so dramatically over the year. Whatever those reasons, there is now a consensus that lower oil prices together with lower bond yields will provide a decent boost to economic growth, certainly to beleaguered households in many fiscally constrained developed market economies.

With such responsibility placed on the US economy’s outlook, scepticism about the strength of US growth has been a recurring theme for financial markets since 2009. Equity markets and US bond yields have been moving in tandem of late as the economic outlook fluctuates and worries about falling price indices raise concerns about disinflation, low inflation or deflation throughout the world.

Caution is advised as tensions in Europe mount once again and many geopolitical fears remain. And with the risks skewed to the upside for rates, especially in the US, and so many investors already in position for US economic good news, the danger now could be that only surprisingly strong economic news, both in the US and, eventually, from Europe, can drive stocks and other risk assets higher.

Throughout Europe there has been a surge in the popularity of anti-EU parties, not just in Greece and other periphery countries but also in France, the Netherlands and Germany. In the UK, the change in voting patterns comes at a particularly awkward time for the mainstream parties, just as the country heads towards a general election, especially given the lack of a clear majority in the previous poll.

The UK economy has had a credible period of growth in the past few years but the electorate is not so cheerful. Taxes have risen and services have been cut, while the public debt outlook remains poor and talk is of further restraint and rationalisation. Although employment is up, average earnings have only recently risen above inflation.

Over the course of 2014, overseas investors were net sellers of Gilts for the first time in a decade, perhaps fearing the Bank of England was closer to raising rates than even the Fed. However, domestic (non-bank) investors have, so far, more than taken up that slack and have been big buyers of both conventional and index-linked Gilts.

The outlook for the UK currency is more worrying. Britain continues to run a huge current account deficit alongside its large fiscal deficit. In the years since the financial crisis erupted, the UK seemed to offer a safe haven during bouts of European tension, but this is less the case now.

With a possible messy outcome  from this year’s election – one that endangers the UK’s place within Europe – international investors could view the country as a contributor to Europe’s tensions rather than a sanctuary from them.

The US Treasury yield curve has fluctuated markedly over recent months. First, there was a bearish reaction, particularly from the middle of the curve, to the somewhat hawkish December FOMC comments; then there was a bullish move at the long end, from increasing tensions in Europe and the possibility of QE from the ECB.

Credit underperformed rates in the latter part of the year, which was to be expected given the strong inverse relationship between the direction of risk-free yields and credit spreads.

US credit ought to do better this year as a result of the existing looseness of monetary policy, low inflation, gradually rising risk-free rates and reasonable economic growth. But here, too, there is an uneasy feeling that only really good news will move the market up, given how much of that benign outlook is already priced in and just how low absolute rates are.

During the course of the whole of 2014, although total returns in credit markets were reasonably high, excess returns were generally rather dull – reflecting the extent to which falling risk-free rates can account for the performance of credit across the world.

European investment grade was one of the few sectors where spreads narrowed versus government rates. The sector has enjoyed a particularly supportive technical side, with net negative new supply, banks continuing their deleveraging, as well as solid issuer fundamentals and conservative corporate management. Should the European economy fare better this year than the gloomy consensus forecast, then European corporate credit could enjoy another reasonable year.

While the rates markets were perplexing last year, the US dollar did what was predicted and rose against pretty much everything else. The USD index put in its best performance since the 1997 Asian crisis as the euro and the yen battled disinflationary forces, China’s growth faltered and all the commodity currencies took a battering.

There is now some discomfort about the crowded dollar bull positions, as well as suggestions that the rapid rise in the currency might have put it into overvalued territory. However, it is more likely the factors that drove the dollar higher through 2014 are still valid and dollar-supportive.

The US economy is growing faster than most others. Inflation is at a higher level than elsewhere, providing more of a buffer against the growing spectre of deflation hovering over the rest of the world. Most importantly, there are wide interest rate differentials between the US and the other two majors: Europe and Japan. 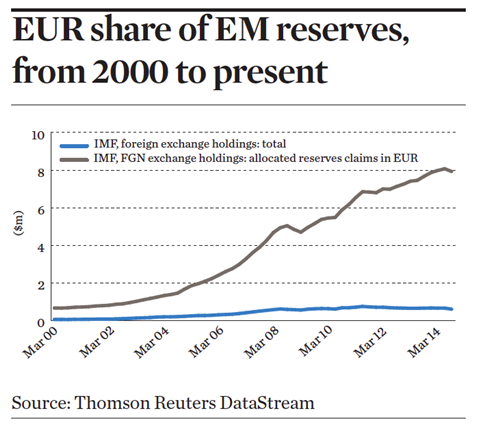 In the end, it is hard to identify any other currency that could do more than the dollar given today’s conditions and outlook. The euro seems to be losing its appeal as a reserve currency. Having hovered at just under 30% of EM reserves, since early 2010 the euro’s share has fallen steadily to around 22% last year, after reserve managers opted to re-allocate out of the currency as euro deposit rates moved down through zero.

There are now fewer global buyers to absorb those excess euros when active investors decide to lighten their loads, meaning one less important support for the currency.