Creeping tensions have appeared in the interbank market that, in the past, sowed the seeds of economic downturns and financial crises. Three-month interbank loan rates have risen, resulting from the stubborn refusal of longer-dated bonds to pierce their yield-resistance levels which threatens to flatten the curve. Overly keen interest rate hikes by the US Federal Reserve have been frowned upon by the bond markets. Flat or inverted yield curves put downward pressure on commercial banking and this could be the source of tensions at the short end of money markets. Nonetheless, the recent rate hike by the Federal Reserve is by no means the last as the new chairman seeks to make his mark.

Interestingly, when 10-year US bond prices fell and threatened to pierce the 3% yield level in February many investors predicted rising yields in the future. Now, however, bond yields have retreated in the fear that the White House neo-mercantilist rhetoric will restrain world trade. Nonetheless, investors are lured by so-called ‘risk-free’ cash or government bonds.

Sovereign bond investors in developed countries assume that whatever the price gyrations, they will be paid out in full at maturity. By keeping long-term investments, investors feel they have parked their money in the safest of havens. This is true of pension funds, most of which are heavily exposed to fixed income. The perceived wisdom is that such portfolios are risk-free and pensioners are safe.

This is a mirage for several reasons. A peripheral euro-zone government bond, to take an example, is anything but safe. The quality of the borrower is worsening because of persistent annual budget deficits that require the debt to increase mechanically year after year. The situation has been deteriorating since the 1992 Maastricht Treaty permitted single currency members or aspirants to incur annual budget deficits of 3% and limit their debt-to-GDP ratio to 60%.

The last few years have seen an improvement in the conditions of peripheral euro-zone member states’ economies, as the economic cycle saw above-average growth that caused their ratio of debt to GDP to recede. But the long-term trend is clear. As these annual budget deficits need to be financed through the issuance of new bonds, the public debts of these borrowers have exploded. This is cavalier of politicians who will be long gone when the time for debt repayment arrives. Still, the safe haven perception of government bonds remains in place as such investments represent the lion’s share of pension fund portfolios. 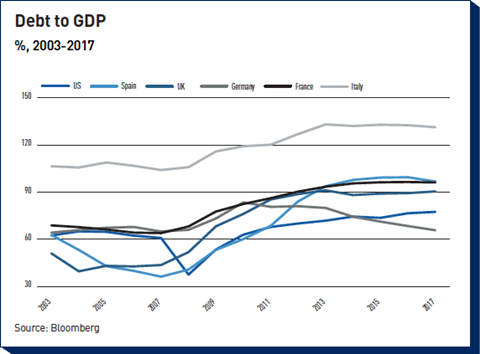 In the corridors of Brussels there is renewed talk of creating European Safe Bonds. These are sovereign bond-backed securities from various euro-zone members with differing credit ratings.

The purpose is to create a safe asset in the single currency zone as well as to break the ‘negative feedback loop’ caused when bond yields shoot up on banks’ holdings of sovereign bonds which are required on balance sheets as a capital buffer against the next crisis. Whatever the merits of this, there is talk of penalising sovereign bondholders in the event of a country entering default negotiations. (This is nothing new in emerging markets as Venezuela’s default demonstrates again.)

During and after the financial crisis that began 10 years ago, taxpayer money was used to bail out the banking system, deemed too big to fail. A meltdown was avoided but government debt soared to new highs. Now, in their eagerness to please the voting taxpayer by touching the investor, politicians are again discussing the possibility of bailing in bondholders in the euro-zone through a haircut.

Given the European demographic crisis, it looks certain that pensioners will end up doing worst in the future. The passage of time worsens the situation, both for the sovereign borrower and lender. This lender (bond investor), however, ignores the indebtedness because a euro-zone or developed country sovereign default is unthinkable. There is widespread belief that such a government cannot default. Yet, there are no plans for these countries to repay their debt.

Governments today cannot produce inflation to erode the real value of their debt, as in the decades preceding globalisation and free trade. If the risk of deflation should return (it is never far away), the country in question could experience a deflationary bust. Even in Germany, where the constitution requires a budget surplus, it is not used to retire debt. It will be used to build bridges and roads. This is a far cry from a safe haven.

So where are the true long-term safe havens?

In the long run, a quality growth business will produce the best risk-adjusted return for its investors. This assumption rests on a rock solid, debt-free balance sheet; earnings power unaffected by the economic cycle; continuing free cash flow growth into the distant future, more distant than the average business; and intact pricing power for years to come. These and other ingredients of quality and growth are well-established and the historical results are evident for investors who have had the patience to allow time to work for them. Such investors believe that quality growth investing represents the ultimate safe haven. They also believe that such investments are (and should be perceived as) an asset class in their own right. Not many such businesses can be found as publicly-quoted shares, but there are enough to fill the portfolio of an investor obliged to think long term.

As the quality growth business expands and thrives, free from debt, its share price goes up, allowing the investor to benefit from compounding. Time will be this investor’s friend.

Conversely, as the sovereign borrower increases his debt year after year and his balance sheet suffers grinding deterioration, his economic value falls relentlessly and the victim will be the bondholder. Time will be this investor’s enemy.

It is preferable for the long-term investor to be bailed out by a quality growth business than bailed in by a sovereign bond.

Peter Seilern is the chairman of Seilern Investment Management