There were more than 3.2 million indices available globally at the end of June 2017, according to research from the Index Industry Association (IIA).

Of these, roughly 95% were equity-based indices, meaning there were more than 70 times as many equity benchmarks available for investors than there were listed equities to invest in.

At the end of 2016, the World Bank estimated there were 43,192 listed companies globally.

All the indices in the research were calculated by just 14 firms – all members of the IIA.

Rick Redding, CEO of the IIA, said: “Often the discussion revolves around products, but with approximately 5,300 exchange-traded funds [ETFs] worldwide, the results show that benchmarking is clearly the predominant use for indices around the world. 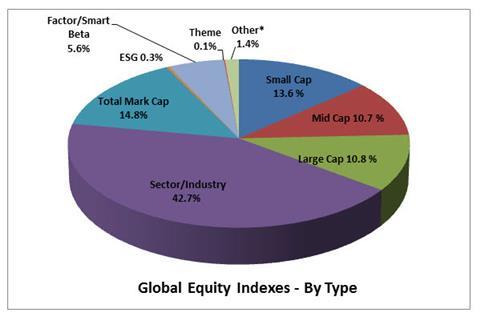 “With over 3m indices available, asset managers and investors want choices when choosing a benchmark that best represents their portfolio and the underlying market.”

Redding added that indices focusing on environmental, social and governance issues and smart beta accounted for just 6% of benchmarks, “despite recent attention”.

A record year for ETFs…

The majority of new money ($73bn) came into equity products, the group said. Within this, emerging markets ETFs proved popular as they posted average returns of 37%.

European equity indices proved the most popular during the year, gaining more than $16bn. In contrast, UK equity flows were “meagre”, SSGA said.

“Additionally, at the end of last year, US tax reforms had a major effect on the market and we expect to see further interest in sector strategies over the coming months,” she added.

According to research firm ETFGI, global ETF assets under management grew by more than $1.2trn during 2017, reaching $4.66trn in total at the end of December. 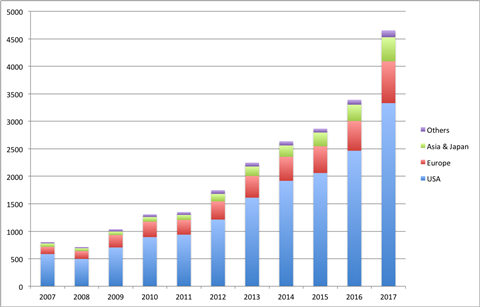 How exchange-trade fund assets have grown

… And for hedge funds

Meanwhile, hedge fund industry assets also hit a record level in 2017, reaching $3.2trn at the end of December, according to data company HFR.

In the fourth quarter investors put $6.9bn of new money into hedge funds, the highest level of quarterly inflows since the second quarter of 2015, HFR said. Total inflows for 2017 totalled $9.8bn.

Last year was also the first since 2003 in which the hedge fund sector had made aggregate gains every month. HFR’s Fund Weighted Composite Index of hedge funds gained 8.7% for the year, the best calendar year return since 2013.

The most popular hedge fund style was multi-strategy, HFR reported, attracting $10bn of new money in 2017.