A three-way chain reaction between technology, regulation and demographics is driving a new transformation

Last year ushered in an age of techno-utopianism when a computer algorithm called AlphaGo made history. It beat the 18-time world champion of Go –  an East Asian board game – with as many possible moves as the number of atoms in the universe.

It provides stunning evidence of the leap from the traditional algorithms that carry out routine instructions to the era of cognitive computing: systems that work and learn like human brains as they crunch vast amounts of structured and unstructured data. No wonder asset managers are sitting up and taking notice, according to a new survey from CREATE-Research and Dassault Systeme*.

Historically, asset managers have enjoyed one unique advantage: consistent profit margins well above 30% while deploying zero capital of their shareholders. Lately, however, they have increasingly come under attack: as much as 87% of their growth in the period 2009-16 has been attributed to the market’s artificial rise, fuelled by central banks’ ultra-loose monetary policies. The organic component has been declining.

Worse still, passive funds continue their steady assault on active funds worldwide. Forecasts show that share of passives will double their share of global assets by 2018, compared with only a decade ago. It has become increasingly important for asset managers to differentiate themselves to justify the fee premium over low-cost indexed funds. The search for cost-effective organic growth has intensified, turning the spotlight on digitisation – but not without hesitation.

Social media tops the list
Accordingly, implementation of the eight key innovations of the current digital revolution has involved small steps rather than giant leaps (figure 1). It is also about going after the low-hanging fruit, like social media, which involves least change to the existing business models; while still deliberating over transformational tools such as big data, robotic process automation, robo-advisers, cognitive computing and blockchain.

Whereas 54% of the survey respondents have adopted social media, only 6% have adopted blockchain, most of which are subsidiaries of large banks that are part of global consortia developing the new generation of blockchain.

The former reconfigure the traditional producer/distributor/client relationship. Not only do they facilitate the availability of portfolio information in real time, they also enable portfolio simulations and investor education via mobile phone. Over time, they are expected to drive growth in the direct-to-consumer channel.

Application programming interfaces, on the other hand, enable asset managers to leverage their existing IT assets to generate new business via mobile apps and the cloud.

More haste, less speed
At the other end of the spectrum in figure 1, progress is relatively slow. Not only do they require big investment in technology, they also call for radical changes in existing business models. For example, robotic process automation seeks to automate almost all manual routine operations.

Similarly, big data (implemented by 27%) and cognitive technology (12%) have the potential to improve alpha generation in general and factor investing in particular. But it takes time to develop the necessary human/machine interface.

Finally, both robo-advisers and blockchain are revolutionary in their design. But implementation will be drawn out. Only large asset managers have the resources to run a robo-platform as part of their strategy to dominate their distribution network.

Stand-alone robo-advisers, on the other hand, have yet to develop a notable brand and a significant asset base. Many are discovering the importance of human contact and are changing their offerings accordingly. Their growth will take off as and when Millennial investors gather a critical mass of assets.

Moving on to blockchain, as a distributed ledger that disintermediates account settlement, it requires a clear ownership and control structure, without creating a natural monopoly. Its governance and regulatory framework are slow in evolving. It is not as yet clear what role global regulators should play in overseeing a secure ledger for all activities related to securities trading and settlement.

Such a cautious approach to digitisation, implicit in our survey, is dictated, first and foremost, by a fear of the unknown. The dominant tendency, therefore, is to create a few incubators that facilitate piecemeal progress, helped by the granularity of technology. At the surface level, this sounds like inertia and complacency. But more fundamentally it is a matter of balancing stability and change.

Delicate balancing act
In real life, businesses are influenced by a complex mixture of factors, some moderating the pace of technological implementation, others accelerating it. The end result depends upon their relative strengths. Typically, it is the moderators who dominate the implementation cycle. Over time, however, accelerators gain the ascendancy, as the early adopters break the mould by challenging the status quo.

Moderators
In asset management, two sets of factors have been identified as moderators for the rest of this decade. The first relates to digital innovations themselves. Many of these are far more opaque than a hand-coded system. For example, cognitive systems need to be given the ability to truly learn for themselves, if they are to discover new actionable insights. On the other hand, the resulting flexibility means that these self-learning systems are a black box. Nobody knows how and why their advanced algorithms do what they do. Until ways are found to make them more transparent to their creators and accountable to their users, progress will be a matter of small steps, not giant leaps.

The second set of moderators cover legacy cultures, day-to-day pressures and costs, as cited by at least one in every three survey respondents in our survey:

First, the prevailing IT infrastructure is ill-suited to new innovations. In good times, asset managers did not take advantage and upgrade their IT systems: there was no evident need. The dominant attitude was ‘it works, give or take’. After all, consistently high profit margins were the norm.

Second, high margins also lay at the heart of the innovator’s dilemma: if it ain’t broke, why fix it? Market downturns in the past have rarely been seen as a burning platform, since recoveries have been as predictable as the dawn. Instead, the core preoccupation has been talent retention. Indeed, organisational stability has been seen as one of the key differentiators when dealing with other people’s money.

Moving on to day-to-day pressures and costs, the structural changes described earlier have diverted top management’s attention from long-term growth to short-term survival. The urgent has often got in the way of the important. The tenure rate of top executives has reportedly been falling, as the bar has been continually rising. Regulatory creep has not helped; nor have the costs of digital innovations and their associated change management.

Accordingly, senior executives need tangible evidence of the benefits of digitisation before committing to big projects. After all, history shows that IT projects can often over-run their budgets and timelines. 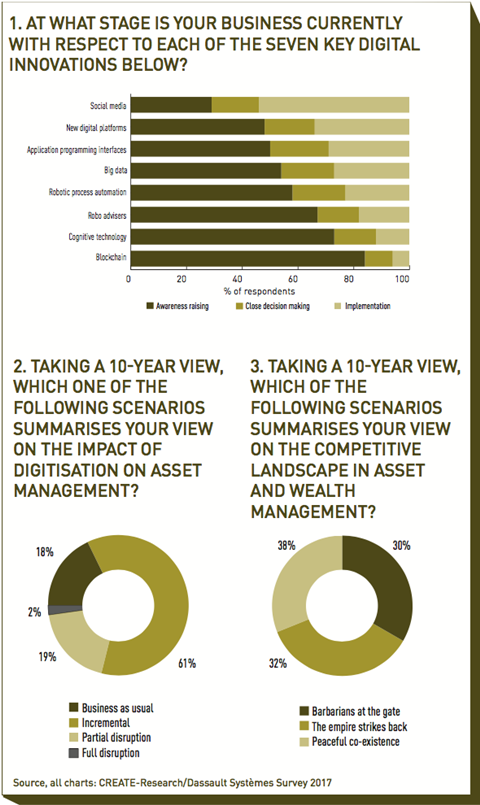 Accelerators
Moderators typically dominate the implementation cycle in its early phase. Anything with no long track record is typically frowned upon. Over time, however, accelerators gain the ascendancy, as early adopters gain an edge and change the competitive dynamics.

Accordingly, five factors are likely to accelerate the pace of digital innovations, as the decade progresses, according to our survey:

These developments are anticipated against the background of asset managers shifting in the current bull market from being price-makers to price-takers. The remorseless rise of passives continues to drive down fees and charges; a phenomenon associated with bear markets in the past. End-investors are not only becoming overly demanding about returns and fees, they are also increasingly becoming self-directed – ready, willing and confident to use online platforms. They want immediacy, connectivity and ubiquity. They want a simple, meaningful, delightful experience, similar to the one offered by other industries.

A new dawn beckons: asset management may well suffer the same curse as the music industry – winner takes all. A choice overload created by proliferating digital platforms will turn investors towards advice algorithms. These, in turn, will increasingly skew investors’ choices towards the biggest hits and the most powerful platforms. Search algorithms rarely nudge end-investors towards anything off the radar.

It is healthy in the sense that end-clients will vote with their feet in search of decent returns. It is unhealthy in that they may be chasing the next rainbow, unless their financial literacy improves dramatically.

Disruption and benefits
Partial disruption. After a headlong expansion over the past 20 years, asset management is transitioning to a maturity phase. But the problem with living through an historic shift is that it is hard to spot at the time. Inevitably, a tug of war is evident in many asset management houses.

Some want to protect the existing revenue streams via incremental changes while others want to create a new future via disruptive changes, defined here as either creating a new market that didn’t exist before or offering a lower-end alternative to the existing product, or both.

Currently, the incrementalists have the upper hand but they are in no doubt that, over time, the evolving structural dynamics of their industry will mean that business-as-usual is the least likely scenario, taking a 10-year view (figure 2). Only 2% of asset managers and 3% of wealth managers think it will happen.

More than anything, client behaviours will drive digitisation over time. Asset management will increasingly evolve from being supply-led to being demand-led.

External threats. There is no doubt that the mega indexers will continue to attract the lion’s share of the new money in motion. Some are developing their proprietary robo-platforms. Others are forming alliances with fledgling robo-advisers. Their competitors will need to respond in order to survive, at a time when the internet giants are beginning to show interest in money management.

Barbarians at the gate. This envisages the external disruptors carving out niches at the commoditised end of the market

The empire strikes back. This envisages asset and wealth managers adopting digitisation in much the same way as most flag carriers who emulated the low-cost airlines by segmenting their client base and having different propositions for each segment

Peaceful co-existence. This envisages alliances between the external disruptors and the incumbents, blending investment expertise with technology know-how.

Views are divided on external disruption: the less likely outcome is barbarians at the gate, in the belief that investors will remain wary of trusting their money to a digital platform that lacks investment DNA and the associated brand. One thing is certain: asset management is set to decouple from a stable past and re-anchor to a disruptive future. The only unknown is the timing.

Benefits so far
In the meantime, the early adopters report the following benefits:

The asset and wealth management industries are at the dawn of a new transformation, more far-reaching than anything experienced before.

*Digitisation of Asset and Wealth Management: Promise and Pitfalls,  available from amin.rajan@create-research.co.uk