Austria: Government’s fall is another blow to reform

Promised tax reforms were put on hold following the toppling of the government. But this is just the latest in a line of unfulfilled pension promises

Many stakeholders in the Austrian Pensionskassen industry say that the promised tax reform for second-pillar contributions was dead long before the country’s coalition started to unravel in the spring.

But the damning video of the right-wing vice-chancellor Heinz-Christian Strache of the Freedom Party (FPÖ) trying to sell favours, and an Austrian daily newspaper, to a fake Russian oligarch’s niece in Ibiza did not help politicians to focus on retirement provision and pensions.

The legislative period had, however, started promisingly. In 2017, 31-year-old Sebastian Kurz of the conservative Peoples’ Party (ÖVP) became the country’s youngest chancellor and he chose the far-right FPÖ as a coalition partner. To signal change, he replaced the ÖVP’s party traditional black colour with a light turquoise. Together with the FPÖ’s long-standing representational colour blue, the government became known as turquoise-blue (Türkis-Blaue).

Partnering with the increasingly anti-migrant and populist FPÖ was a controversial choice. However, some maintained that it might help boost policies in favour of a more capital market-oriented economy. And when Hartwig Löger, former board member of the major Austrian insurance group Uniqa, was appointed finance minister, the pension industry rejoiced. This was seen as a hopeful sign that government would finally tackle the need to strengthen the second pillar.

Initially, Löger talked about tax incentives for companies to set up pension plans and an amendment to the income tax to exempt top-up contributions by employees to their occupational pension plans.

But as the months passed and any discussions on a more holistic view of retirement provision was quashed by the ÖVP’s coalition partner FPÖ, or was sidetracked by other political matters. So the country continues to rely heavily on the pay-as-you-go first pillar to provide sufficient retirement provision for most of its citizens.

Revisiting the past in a bid to regain trust

The term ‘Historiker-Kommission’ has so far almost exclusively been used in Austria in connection with research into an entity’s Nazi-past. However, in the second-quarter newsletter issued by the Austrian pension fund association FVPK (Fachverband der Pensionskassen), its chairman Andreas Zakostelsky called for such an “independent commission of historians” to look into the implementation of the second pillar almost 30 years ago.

While pensions are rarely discussed at the political level, the debate over losses on the capital markets affecting Austria’s pure defined contribution plans in the second pillar continues unabated. For 2018, Pensionskassen reported a loss of 5.18% on average. This, once again, led to cuts in pension payouts for those with insufficient buffers. Some of the gravest losses are suffered by people who were among the first to be transferred to the newly established second pillar in the early 1990s. The companies outsourcing their pension promises back then often did so by assuming high capital-market returns of 6% or more over the foreseeable future. As the pension promises were quite high – sometimes four-figure supplementary payouts on top of a good state pension – the companies could not afford to keep the liabilities on their balance sheet or fully fund their transfer to a Pensionskasse.

With the implementation of an expert group looking into the originally transferred pensions the FVPK now hopes to appease angry pensioners. The continued devaluation of this small number of higher supplementary pensions has poisoned the system and continues to weaken trust in funded pensions.

Zakostelsky also called on politicians not to “demonise” the second pillar mostly along with capital markets as a whole. “For close to 30 years now Pensionskassen in Austria have helped the fight against retirement poverty,” said the FVPK chairman.

In June 2019, the so-called Ibiza-video eventually toppled the government. A technocratic government was put in charge, led by Brigitte Bierlein, the former head of the Austrian constitutional court and first-ever female chancellor. Retirement provision was not put on the ‘expert’ government’s agenda.

On 29 September a new election will decide which parties will form a new government. Former chancellor Kurz is confident of re-election. He is hoping his party, which he calls the new ÖVP, will win a solid majority. But single-party governments have been the exception since the republic was re-installed after the second world war. 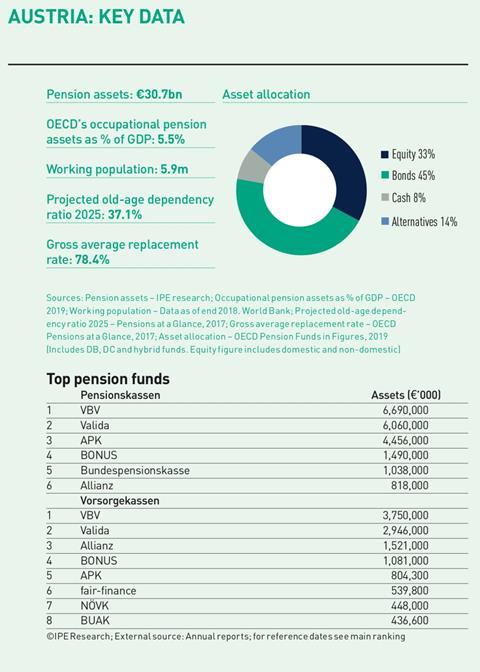 The (tax) reform that never was
The previous coalition had promised to finalise its tax reform this year. If Löger had his wishes granted it would have included at least two amendments to help strengthen the second pillar, and with it the Austrian capital market.

Off-the-record talks between the pension industry and Löger raised hopes that a long-standing demand by the Pensionskassen could finally be met – the introduction of the exempt-exempt-taxed (EET) principle for employee contributions in the second pillar. This system is in place in many occupational pension systems and means that contributions and investment returns made from them are tax exempt. Only upon retirement is the paid-out pension then taxed. At present only employers can fully write-off contributions made for their employees to occupational pension plans in Austria. Employees wanting to make top-up payments have to do so from their net income.

Another matter that could have been promoted by Löger as finance minister is an increase in the tax-free allowance for deferred compensation (Entgeltumwandlung). In Germany this is a widely used employee-finance form of occupational pension plan as up to €4,400 per year can be deferred from the gross salary to a pension plan. The current limit in Austria for tax-free contributions to pension plans is just €300 per year. Social insurance contributions (including first-pillar pension contributions) still have to be paid on the deferred amount.

Pension experts also hoped that the coalition would reinstate the so-called Pensionskommission. The commission, made up of various stakeholders from the pension industry, had been examining the development of the first pillar and making reform proposals until 2015. It was dissolved when neither the group itself nor the political parties in the then conservative/socialist coalition government could agree on the mid-term prognosis for the rising costs in the pension system.

The pension industry then called for a new commission which would take a holistic approach and look at all three pension pillars and their potential. Currently, only 20% of employees in Austria are covered under an occupational pension plan. The figures for private supplementary pension contracts have not even been compiled. So far, no new pension commission has even been considered.

And none of the possible reform proposals mentioned above even made it to parliament before it was cut short by the Ibiza-scandal. Before that, the parliament had been overshadowed by migrant debates and the Austria presidency of the Council of the European Union in the second half of 2018.

Blame for progress in retirement reform has been put at many feet. But it is clear that no political party wants to be in the first government to admit that a pure pay-as-you-go pension provision is unsustainable. Continued adequate pension levels from the state pension could only be achieved for future generations with additional public financing and new ways to calculate pensions for flexible modern work contracts such as part-time work.