3
Briefing: It is all downhill from here

Briefing: It is all downhill from here

Six months ago, markets were rediscovering volatility, sentiment was wavering and there were growing fears that we had reached the end of a decade-long bull market for most assets. There were several reasons, such as worries over indicators, global trade tensions and the sustainability of corporate earnings growth, but one of the key ones was the relentless raising of interest rates by the US Federal Reserve.

Quantitative tightening (QT) was the new backdrop to markets and investment strategy, with the Fed steadily ratcheting up rates oblivious to political pressure. Meanwhile, the European Central Bank (ECB) was pausing its gigantic asset purchase programme. Only the Bank of England seemed a lone monetary procrastinator as it mulled over the timing and the potential impact of Brexit.

But in recent months, talk of QT has suddenly turned to talk of further easing all round. 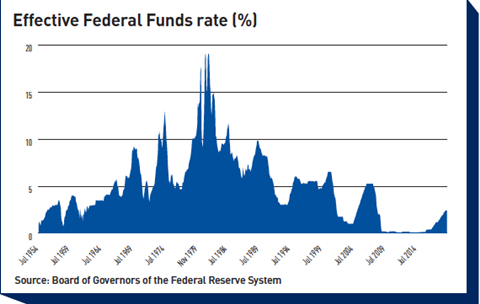 In the US, Federal Reserve chair Jerome Powell has acquired a new dovishness, while the ECB has joined the Bank of England in taking a more accommodative approach as it also faces its own domestic travails. Alongside, the next tier of central banks are also cutting rates.

The key reason is a renewed sense of economic slowdown. Markets face multiple risks today and having gently handheld them through the last decade, central bankers find themselves worrying about the next.

The recovery from the global financial crisis of a decade ago is losing momentum. There are several reasons to pause for thought. These include rapid rises in debt levels, the perceived fragility of large segments of the economy to rising rates and the vociferous reaction of markets in late 2018.

Consensus a year ago was that QT was inevitable, with the Fed leading the charge. Many investors rushed to prepare their portfolios for normalisation, and somewhere in the halls of defined benefit (DB) pension schemes and other liability-driven investors, there was probably relief that the crush for yield might finally be coming to an end.

But markets are transient and sentiment shifts fast. After the rapid back-pedalling by policymakers in 2019, the course appears to have reversed. Where the market once saw multiple Fed rate rises this year, it is now hard to see even one.

In recent months, the effective federal funds rate – the rate at which banks lend federal funds to each other overnight – has flatlined. This matters as it is, in effect, the price of liquidity as it is a function of market forces but with a strong influence from the Fed’s actions through interest rate changes, quantitative easing (QE) and the like.

The price of liquidity is no longer rising as markets embrace the more dovish tones coming out of the Fed. There is a strong argument that the interest rate cycle has peaked, and that we are entering another prolonged period of lower for longer.

Policymakers are most worried about the potentially catastrophic effects of another recession, or worse, another crisis. In addition, there are the concerns expressed by commentators over asset-price inflation, the effects on inequality and the perpetuation of zombie firms.

Financial and economic stability are more important than social equity. Central banks have focused narrowly on their stated remits, namely inflation-targeting and employment in the main. The rest is for politicians to fret over.

The developed countries have shifted to an accommodative and potentially easing paradigm. The future path of interest rates is downwards, although some economies, notably the euro-zone, may have to resort to other unconventional means to lower the effective rate.

Yet, this path is littered with potholes and pitfalls.  Central banks are facing an unenviable dilemma. A decade on from 2009, they are still struggling with economic fragility. Debt burdens have risen significantly across multiple segments from student loans to corporate debt, to consumers, to governments. This has created a vicious feedback loop that leads to accommodation by policymakers for fear of undermining stability. However, there is an economic and a business cycle. A future recession will come sooner or later.

In this scenario, central banks would prefer to have ammunition and capacity to fight the next war. Peaking too soon compromises this strategy. In a future downturn, interest rate cuts are limited and not even an option for some. QE becomes no longer unconventional but part of the standard toolkit.

The likelihood of more monetary shock and awe is high. That is particularly the case given that a sustained low-interest-rate environment prevents bad investments from being uncovered. It also increases the probability of future downturns being more punishing.

Do they maintain dovishness to support their economies, or do they yield to the growing dangers of doing nothing?

It is no longer clear if central banks are in charge. Populism and its attendant iconoclasm continue to be in the ascendant. Policymakers on all sides are demanding more control of monetary levers. In particular, Donald Trump’s clashes with the Fed over easing, and the talk of modern monetary theory on the other side of the political partisan divide.

Central banks find themselves on a slippery slope of dwindling options and attacks on their independence. Most economies are too weak to take ‘normalisation’, yet the capacity to fight a future downturn is increasingly constrained. The likelihood of being behind the curve is high.

Markets appear to agree on one level, perceiving that lower for longer is here to stay. For investors, the implications are stark. Real returns face a drag, even in these lower inflation times, as interest rates undershoot. Growth remains at a premium.

The next likely policy move is towards fiscal activism to boost growth. There are signs of this with talk of significant investment in infrastructure, the Green New Deal, increased focus on mercantilist initiatives such as China’s Belt and Roads project. It is interesting to note that even in a bitterly divided US, President Donald Trump, Congresswoman Nancy Pelosi and US Senator Chuck Schumer were able to collectively agree on the need for an ambitious $2trn (€1.8trn) infrastructure programme.

The challenge remains, though, whether policymakers retain sufficient authority and credibility to contain the next downturn. Given today’s populism and obsession with countering inequality, the next bailout may be directly to society and not to investors.