Briefing: The cliff-hanger of European banks

European banks are not looking good, with Deutsche Bank’s miseries being the most high-profile. Indeed, it has been a bad decade for European financials, with share prices still a fraction of their pre-crisis highs.

Do European financials pose a systemic threat to the global economy in a way that harks back to the last time it teetered on a cliff edge? And, even if not, how should investors view this vital but troubled part of Europe’s economic ecosystem?

Marc Franklin, head of flexible multi asset at NN Investment Partners, says any fears that European financials face another Lehman moment would be misplaced. “One has to make a distinction between financial institutions that are or were of global systematic importance – such as Lehman – and others where the effects could be contained – for example, certain German banks, where the German government might act as a backstop.”

Even so, European banks still face a difficult future, exacerbated by downward inflationary pressures. “One thing that will really worry the ECB is inflation expectations anchoring lower, with five-year expectations falling towards 1%, given that inflation targeting is what it’s all about for the ECB,” says Laurent Frings, lead credit analysist at Kames Capital. 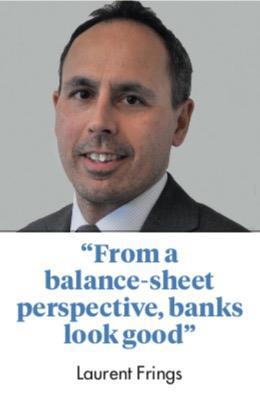 “Lagarde has been vocal about raising inflation expectations, and has also been supportive of Draghi’s ‘whatever it takes’ comments and QE,” says Mike Bell, global market strategist at JP Morgan Asset Management. “If appointed, she will represent a dovish stance at the ECB. The ECB will therefore feel comfortable reducing rates, knowing that Draghi’s successor will support a dovish approach.”

But retail banks need higher rates, supported by loan growth, says Bell. “Banks in France and Germany are seeing that growth, whereas Italy, for example, has seen a decrease. Low rates are a problem they all face, and this is likely to be the case for many years, as we see no obvious catalyst for change.”

What is more, this dovish rate environment is also forcing down euro-zone government bond yields (see figure). This is bad news for Europe’s banks whose profitability is affected by yields.

Dangerous curves
“Retail banks benefit from higher rates, and an upwardly sloping curve, as they borrow at the short end and lend at the long end,” says Franklin. “Moreover, many banks are still experiencing ongoing downwards mortgage-back-book repricing from earlier cuts to the ECB deposit rate, so a negative-rate cycle can drive an extended period of spread pressure for banks.” 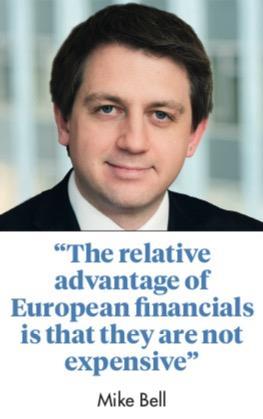 Frings adds that, although the yield curve has steepened recently, this is because the short end has fallen faster than further out on the curve, rather than the long end rising. So this is unlikely to be a harbinger of a recovery and a return to ‘normally’ sloped positive yield curves.

This has depressed profits and means EU banks have been less able to buy back shares to support valuations and shareholder returns, says Franklin. “Their cost of capital is often higher than their ROE [return on equity], which means they are consuming capital and have to keep returning to the bond and equity markets for finance.”

“Many banks are still experiencing ongoing downwards mortgage-back-book repricing from earlier cuts to the ECB deposit rate, so  a negative-rate cycle can drive an extended period of spread pressure for banks”
Marc Franklin

Investment banking operations are faring little better than their retail counterparts. “They need scale,” says Bell. “Over the past decade, we’ve seen many firms pull out of certain operations because, unless you’re in the top tier, you can’t compete.” This explains Deutsche Bank’s exit from the market – few European banks can command the scale of their US competitors.

Essentially, banks are not making enough money in a structurally challenged market, with regulators asking for ever-greater amounts of regulatory capital on banks’ books. 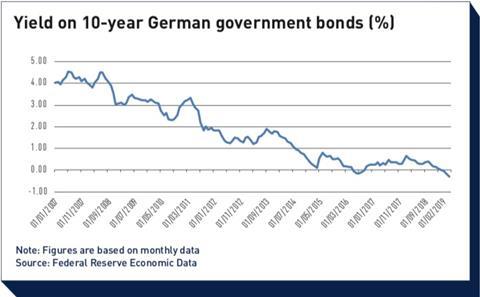 Cliff’s edge
This is a deep-rooted problem but how bad is it? While “there is a negative feedback loop for the entire banking sector in Europe”, according to Frings, this does not itself signify immanent meltdown. “On the plus side,” he says, “asset quality is good. Employment is strong and low rates means that loan default probability is low.” Also, banks’ woes could be mitigated by the ECB introducing tiering, whereby banks will receive a higher rate on their reserves. “But it still has to be decided if, when, and at what rate,” says Frings.

He also maintains that it is important to understand that not all banks are in the same situation. “The best banks have returns on equity above 10%, with 1-1.5x book value.

At the other end of the scale, banks such as Deutsche Bank have returns on equity of 1-2% – below their costs of capital. On top of this, there will be costs attached to the necessary restructuring to address this, so equity investors being rewarded for the risk they take is challenging.”

Equity versus debt
This also raises the question of not simply how one manages exposure to the sector but via which asset class. Although the situation for banks looks poor overall, what is bad for their owners (equity holders) may not be so bad for their creditors. As Frings explains: “Fixed income investors are in a happier position, as banks are sitting on a lot more capital than the historical norm, and investors benefit from more stringent regulatory oversight. They can also invest at different layers in the capital structure at different levels of risk. From a balance-sheet perspective, banks look good.”

That said, investors should be wary of some debt instruments. Franklin warns: “Investors in cocos [contingent convertible bonds] could see these securities forcibly converted to equity if the issuing banks can no longer cover the coupon.” He also urges specificity, rather than simply taking an overarching view of the sector: “When you invest in a bank, you need to know what’s on their books. Investors should shy away from those banks where the derivatives book, where disclosure is limited, is a large proportion of the overall balance sheet.”

And, while Bell urges “caution on the high valuations in certain sectors,” he points to “the relative advantage of European financials is that they are not expensive”, and Franklin agrees that “a lot of bad news is in the price”.

None of this, however, is enough to make this area of the market look a screaming buy. “We see greater resilience in US financials, where we are overweight,” says Bell: “In Europe, because of lower rates and lack of scale, we have slightly tempered that view and are neutral.”

Neutral is probably about as good as it gets for now given the challenges the banks face.