Briefing: The return of carry

• The carry trade looks like it is making a comeback
• Monetary policy divergence has created the basis for this development
• However, markets have become harder to call since the crisis

The carry trade may be making a comeback, after a decade in the doldrums, laid low by the global financial crisis. But as markets have shifted and, should it become a significant option for investors, they will have to tread carefully. This may be no bad thing.

Carry trade strategies are where an investor borrows in a low-interest-rate environment to fund purchases in a high-interest-rate one (see box). These come in several guises: for example, fixed income or volatility.

The best-known carry strategy, however, is the currency trade. These trades work well when currencies are stable and, prior to the financial crisis, seemed like the nearest thing to a free lunch that the markets had to offer for investors. That stability can last for a considerable time while the conditions that support it continue. However, the danger is that when conditions change, they change quickly, as events a decade ago demonstrated.

In the run-up to the global financial crisis, many investors borrowed in yen, taking advantage of Japan’s low interest rate. They converted the yen into currencies backed by high interest rates, such as the Australian dollar. When the crisis hit, this unwound as the differences in interest rates of the world’s economies narrowed, causing the yen to rally relative to other currencies.

Back in February 2007, The Economist magazine warned that the strategy was akin to “picking up nickels in front of steamrollers”, and so it proved to be by 2008. The yen carry reversed sharply as global interest-rate differentials narrowed, causing the yen to rally against higher-interest currencies. As a result, participants suffered significant losses. The 45% sell-off in currency pairs such as the dollar/yen in 2008 was triggered by the financial crisis. As it was (and is) common for such trades to be leveraged – up to 100 to 300 times – losses would certainly have been in excess of this.

Staffan Sevón, head of listed investments at the Finnish pension fund Ilmarinen, warns that the “financial crisis was a wake-up call for investors in carry trade strategies, but markets forget”. Specifically, he says, “there is a lot of leveraging up going on with carry trades – it is a significant characteristic of the market”. However, this is something that the investment parameters of pension funds could protect them from.

The collapse in growth post-2008 and the ensuing financial repression of quantitative easing (QE) made the carry trade a less remunerative proposition as interest rates hit lows on a global basis. Yves Longchamp, head of research at Ethenea Independent Investors, reckons that “interest rates are low and international spreads tight, meaning that exploiting carry trade opportunities has become challenging in recent years”. According to Ethenea, between 2001 and 2007, carry strategies returned more than 40% (6.4% annualised) for a euro-based investor. Since December 2009, however, they have yielded a cumulative 20% return, the equivalent of 2.2% annualised.

These unpromising conditions did, however, begin to change mid-decade. Pieter Jansen, senior strategist at the Dutch NN Investment Partners, explains: “Divergence has been going on since 2013, when the US Federal Reserve announced the slowing of its QE programme. As a result, quite a gap has opened up between the US on the one hand and Germany and Japan on the other.”

Abenomics has made the Japanese yen attractive as a funding currency. The Bank of Japan has set its short-term interest rate at negative 0.1% and the target yield for Japan’s 10-year government bond is about zero. Those are attractive fundamentals for a currency from which to borrow. What is more, the world economy looks to be at its strongest for a decade, with the IMF’s World Economic Outlook raising its forecast of global economic growth to 3.7% for 2018. This may encourage the emergence of more obvious investing currencies.

Nevertheless, markets have become harder to call since the crisis, says Longchamp, as “currencies have experienced sharp and often unexpected movements that do not reflect interest rate changes”. He cites the Swiss franc as an extreme example: “When the euro crisis hit, the franc appreciated significantly while, at the same time, the Swiss National Bank (SNB) cut interest rates to a world low and intervened on the currency market to prevent the Swiss franc from appreciating too much.” Also, he cautions, “the euro/dollar exchange rate has not been targeted by the Fed or the ECB, but its movement cannot be fully explained by changes in interest rate spread”. 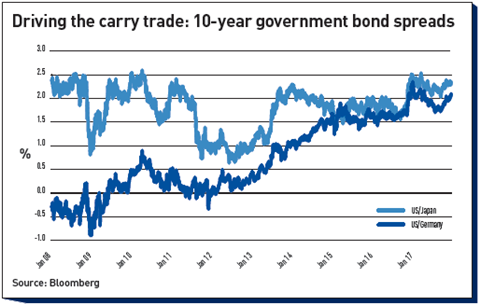 Market volatility in 2017 sent previous carry favourite – the South African rand – into adverse territory during November, when its return against the dollar turned negative, alone among 16 leading currencies to have made a loss to mid-November. Indicating the importance of political factors, the trade was thrown into reverse after speculation rose in the second half that South Africa’s fiscally conservative finance minister Pravin Gordhan would be replaced, halting the upward trajectory of rates. That said, over 2017, South Africa’s base rates have gone from 6.75%, to 7% and back again, while volatility in returns from the rand/dollar carry has been greater.

A further point to note is just how much carry trades can move the market. The foreign exchange market is the largest in the world: $5.2trn (€4.4trn) in 2016, according to the Bank for International Settlements. Currency carry trades can have a significant effect on exchange and bond rates.

The fact that US Treasuries yield more than German Bunds, despite the former being seen to be a safer asset, could well be – at least in part – a carry trade effect (see figure). Investors borrowed dollars and converted to euros in order to buy Bunds to access the higher yield that was on offer prior to the start of 2014. In other words, Bund yields could be lower than they would otherwise be without the carry trade.

Despite Longchamp’s caution, Jansen says economic conditions could be laying the basis for the return of carry strategies: “The US is typically early in the cycle, and others are following. The European Central Bank is now reducing its asset purchases, for example. On the other hand, Japan shows no sign of doing this as yet. While the Fed continues to normalise monetary policy, we don’t expect Europe to do so until the second half of 2018, and Japan even further out.”

Sevón agrees: “If the global economy continues to strengthen, then we should see further divergence in central bank policies, and this should provide more opportunities for carry trade strategies.”

Nevertheless, despite the positive foundations, Sevón is downbeat about the value offered by carry strategies: “Carry trade returns are currently fairly bleak on an absolute basis across the board, but on a relative basis they are okay, given the return profiles for other asset classes. Some trades also provide diversification benefits,” he adds.

He adds: “One way to choose the carry currency could actually be to pick the currency from the country where the central bank is likely to become the most restrictive, whether because of higher inflation or better growth.” It remains a difficult game to call, however, as Longchamp concedes: “But to be honest, we don’t actually have the answer to this question.”

How the carry trade works in practice

Carry trades are where investors earn the spread between borrowing a low-carry asset and lending a high-carry one.

The carry trade can lead to a virtuous circle for investors: if enough people pick up the trade, demand for the bonds will increase, allowing the investor to make a profit on the bonds when they are redeemed.