In 1817, David Ricardo’s ‘On the Principles of Political Economy and Taxation’ was published. In this classic text, he showed trade between two countries can be profitable for both nations, even when one country can make all its goods more cheaply. Ricardo’s theory of comparative advantage has been refined over the past century but it remains widely accepted among economists.

Several conclusions follow from the theory. First, trade is not a zero-sum game. Less trade is a lose-lose proposition for everyone. Therefore, when US President Donald Trump claimed that a trade war is easy to win, he showed that he is badly advised, ignorant to the benefits of trade, or both. It is impossible to win a trade war.

Second, trade problems are by their nature multilateral. The theory of comparative advantage can be expanded to multiple countries and goods. Even without this mathematical exercise, it is easy to understand intuitively that a bilateral trade deficit is irrelevant. Take a three-country world where country A has a deficit with country B, country B has a deficit of the same size with country C and country C has a deficit of the same size with country A. In this example, the trade balance of A, B and C is in equilibrium because the deficits are offset by surpluses with the third country. It is the home trade balance that counts.

US trade has been in deficit since the Vietnam War, long before China’s economic rise. The US trade deficit is not China’s fault, although China may be blamed for undervaluing its currency and for undermining industrial property rights by tolerating production of imitations. On the contrary, China has accumulated a large reserve of dollars, contributing to a situation where the US has no need to bring its trade in equilibrium as long as the renminbi is accepted as a reserve currency.

The most important tool to manipulate the trade balance is the exchange rate. In modern times, developing countries in particular try to maintain an undervalued currency to induce a trade surplus. This is a double-edged sword. A trade surplus will make money flow into the country but workers will be underpaid for what they produce. This happens in China: it gains money with an undervalued currency, but its wages remain depressed, which hinders consumption, but also the rise of the all-important middle class in China and therefore economic development. Meanwhile, US consumers can buy Chinese-made goods at low cost. Trump is not the only politician who fails to understand this mechanism. 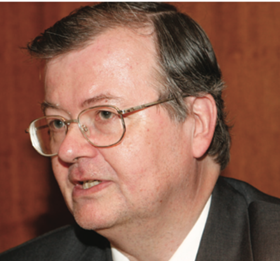 The world got a harsh lesson in Ricardian economics in the mishandling of the 1929 crisis. Many countries tried to improve their situation by closing their borders to get enterprises to shift production to their country. This policy is known as protectionism. Because they all did it at the same time, production remained where it was, trade suffered and the crisis deepened instead. This is the most basic form of a trade war. Its futility is generally recognised.

This disastrous experience led in 1947 to the creation of an international organisation to attain the maximum possible free trade, the General Agreement on Tariffs and Trade (GATT). The successor entity, the World Trade Organization (WTO) is one of the most powerful global organisations. It has developed several global treaties and even has its own dispute-settlement procedure.

Under WTO rules, new tariffs are in principle not allowed. Tariffs are ‘bound’ as part of the WTO agreements. The WTO constantly organises multilateral trade negotiations, also known as ‘trade rounds’, aiming at lowering border controls. Apart from agriculture, tariffs are now insignificant and trade has attained a level never seen before.

There are exceptions to the rules, ranging from customs unions (such as the EU) to emergencies and military considerations, but they come with conditions. A country that considers that another WTO member is invoking an exception without a valid justification can retaliate. This is the mechanism of the modern trade war.

Protectionists deny the benefits of free trade. The protectionist analysis is static: enterprises react to new tariffs by treating them only as a cost. A dynamic analysis shows that new tariffs can effectively be circumvented – that is, by trade diversion.

Trade diversion is playing with the production chain. If the EU levies a tariff on jeans from Asia, but not on denim suits, Asian countries export denim suits: trousers plus a tiny jacket. Importers throw away the jacket and save on the tariff.

The Trump administration has introduced tariffs on steel (for simplicity, I am disregarding aluminium here). In a static analysis, this helps US steel plants and hurts non-US steel plants. The dynamic reality is quite different. To begin with, marginal US users of cheaper foreign steel succumb.

All those hit with the new tariff retaliated, each in their own way. The EU did the least, targeting some luxury US products, such as US whisky and Harley-Davidson motorcycles. The company is considering moving part of its production to the EU. It will be well received there but, as in the case of Mid-Continent, the largest nail manufacturer in the US, the move will cost employment and tax receipts in the US.

Canada took action on some US products competing with its own national champions. Further damage was political, as the US had used the ‘military necessity’ escape clause as an excuse, implicitly branding Canada as a military danger to the US. Mexico retaliated on products from Republican-voting areas. China over-retaliated and also sought to hurt Republican voting districts. In addition, its government exercises enough control over its currency to be seen as the source of the record depreciation of the renminbi.

In both cases, the US economy lost more than it won. The problem is not the steel trade. Steel is a typical developing country product and a steel plant in a rich country is becoming an anachronism. Even China’s steel production is problematic, as its energy supply is not well divided over the country. Retaliation is about the principle. The US is too big to ignore. Free trade is too much wealth and development at stake to shrug off. An example must be made.

Pension investors may think they need not react. On a macro-economic (asset allocation) level, growth is reduced by Trump’s trade war. However, interest rates are still poised to go up so there is no alternative to equity. On a micro-economic (stock-picking) level there will be winners and losers, though. US steel plants are winners in the short run, but as the Mid-Continent case shows, they win less than you might expect and their gain is based on a counterproductive political measure that is certain to be reviewed when a new administration comes in. At best, they will have to close later.

Large multinationals and vertically integrated companies will largely be able to circumvent tariffs with trade diversion. The losers are specialised producers who cannot avoid the tariffs or use domestic steel without losing their competitive edge, as well as marginal steel producers outside the US. The former can only migrate. The demise of the latter is hastened. The big losers do not even enter the investment equation – Republican voters.