Father Christmas delivered a sack of coal to equity markets last Christmas Eve, with the S&P 500 index losing 1.8%, following a three-day slide. Forecasters had previously been expecting two or three rate hikes in December, as Federal Reserve chairman Jerome Powell steered that discussion. He had mistakenly assumed that the economy had not yet reached a normal, neutral level but it already had, forcing him to backtrack.

After that unmerry plunge, Powell delivered perplexing messages. Six weeks after Christmas, the Fed made a u-turn in its reaction function, in a sharp pivot. The central bank made a dramatic shift from a quantitative tightening of interest rates to a rapidly loosening monetary policy.

Yet even three months later, Powell was still counselling patience, with US unemployment at multi-decade lows, and inflation only slightly under target. “The economy continues on a healthy path,” he insisted at his May press conference. Then in September the Fed announced another quarter-point cut in rates.

Equity markets were the culprit in late 2018 but today the bond market is pressuring long-term rates by inverting. The ongoing conundrum is, what is changing the outlook so fast? Is inconsistent messaging from the Fed to blame, or is it a more pervasive change in its approach to monetary policy?

Monetary tools are failing
Since the 1970s and 1980s, when Paul Volcker’s Fed was actively tackling inflation, the central bank has always prioritised price stability over growth in setting monetary policy. Fed chairman Ben Bernanke, even in the throes of crisis, suggested that inflation could be reversed if required. However, that prescription has proved less effective in recent years. A new normal of low inflation, growth and interest rates challenges central bank stimulus tactics such as quantitative easing (QE).

Now the theme has changed to a recognition that if recession shows up, the Fed may not have the fire power to deal with it. Unemployment has fallen farther than anyone dared to hope. The balance of dynamics has shifted and Tom Graff, head of fixed income at Brown Advisory , an independent investment manager based in Baltimore, highlights the dilemma: “We don’t fully understand the transmission mechanism between monetary policy and inflation,” he says.

Signs of distortions abound in the global environment. “The Fed has discarded its dual mandate,” says Richard Saperstein, CIO at Hightower Treasury Partners, referencing the central bank’s historical commitment to both stable prices and maximum employment. He notes: “We have nearly 2% inflation and full employment, yet the Fed is taking action. $15trn (€13.5trn) of global debt is negative, with a compete misplacement of credit risk found in bond yields. A country like Greece provides the same yield as US Treasuries.”

The Fed’s own inflation forecasts have not panned out either, over the past eight years. “Inflation continues to run below trend. The TIPs [Treasury Inflation Protected Securities] have plummeted to 1.5%, only once rising above 2%,” says Ken Leech, chief investment officer at Western Asset Management. “Powell must establish inflation credibility, to ensure markets believe he is willing to do what it takes to get inflation up to target.”

Global slowdown
Globalisation has inextricably roped the world’s central banks together. “In early 2018, all observers were discussing synchronised global growth. By the end of that year, the conversation had turned to Germany in recession and China slowing, in a 180-degree move,” says Mark Heppenstall, chief investment officer at Penn Mutual Asset Management, an institutional fixed-income manager based in Pennsylvania.

It seems Fed policy is becoming more focused on global conditions than on its traditional dual mandate for calibrating prices and inflation. Saperstein says the Fed is mainly concerned about the global slowdown washing up on US shores, and that it is putting in an insurance cut, although all factors indicate the country is not barrelling toward recession at this time.

The ECB has now restarted QE  and lowered the official interest rate, putting a wider spread between the Fed funds and ECB rates. Hence, the Fed is ready to pre-empt that widening by lowering its own benchmark rate. But as the ECB fires up the money-printing press, it risks further contagion for euro-zone banks, with little gained in productive growth.

Moreover, trade war rumbles with China will affect manufacturing supply chains and encourage China to devalue its currency. That devaluation will, in turn, prompt other countries to do the same. 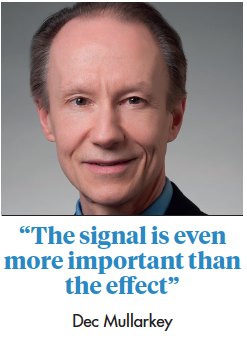 Dec Mullarkey, managing director, investment strategy at SLC Management, an institutional asset management group based in Toronto, envisions a continuing trade war pulling down both Europe and China with no clear end in sight, and predicts a “tit-for-tat, with no grand bargain in the works”.

Powell’s messaging has added to confusion, veering between a dovish and a neutral stance. “He always has something for everyone, with a foot in each camp,” says Leech.

In his 16 July speech, Powell argued that the central bank should focus on inflation rate expectations, and manage them directly, while monitoring economic and employment data. He said “well-anchored inflation expectations in the context of improved monetary policy, demographics, globalisation, slower productivity growth, greater demand for safe assets, and weaker links between unemployment and inflation… seem likely to persist. If that happens, the neutral rate of interest will remain low.” Leech points out that “persistently weak” is a far cry from “transitory”.

At the same time, US President Donald Trump is influencing the communications from the wings. “He is cajoling Powell to be more dovish, so each time he sounds less independent. And Powell is not a great communicator,” says Graff. In any case, all the Fed governors are not entirely on board and it takes leadership to reach consensus.

The toolbox
While monetary policy may have run its course, there are still alternative remedies for today’s unchartered territory. Without question, the negative-interest-rate experiment carries risks as a last resort. Coming out of the 2008 crisis, it served to boost financial organisations, but now appears to be having the opposite effect. 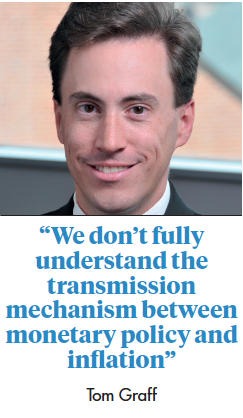 Other possible methods of accommodation include fiscal policies, more QE or buying up mortgage-backed securities. “If the economy weakens, non-interest-rate stimulus would be the chosen path,” says Heppenstall. On the fiscal side, he suggests a programme like a big infrastructure plan, attached to a 50 or 100-year bond issuance. With the cost of debt so low, the US could increase borrowing to fund such a scheme. “In the Great Depression,” Heppenstall says, “we saw major projects sponsored by the government.”

Demographics, technological advances, the “Amazonification” of retail, and the growth of the service economy have all helped contain inflation. Heppenstall says: “If all those elements are baked in, does it make sense to supercharge inflation, just to get to a 2% level?”

Meanwhile, as business sentiment sours, Powell needs to reassure capital markets that he is trying to underwrite growth, while conveying that he is as concerned about external, as about US economic conditions. 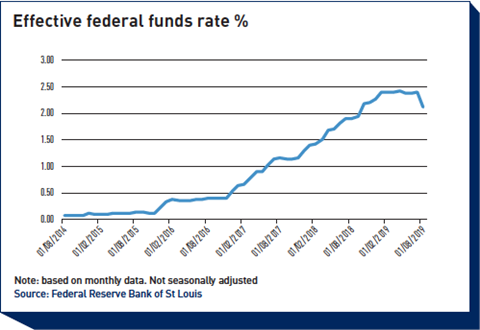