Plans to restrict the  ability to switch between the funded system and the first pillar have been dropped, Barbara Ottawa finds

For a while the Bulgarian pensions industry was really worried. The government had planned an amendment to the social security law that would have let people choose to switch from the funded pension system into the unfunded first pillar but without the option to switch back again.

The funded pension system started in 2002 has meanwhile accumulated close to BGN6bn (€3bn). This would fill, albeit only temporarily, the gap in the first pillar pay-as-you-go system the government is struggling with.

A year ago, PensionsEurope, the Brussels-based representative body of the continent’s national pensions associations, addressed “deep concerns” to the government, saying the reform was “remarkable as employees are made to choose between two systems of retirement provision that are  not comparable: an unfunded and a fully-funded system.”

However, opposition parties, pension stakeholders and union representatives were able to convince the government to soften the amendment. They argued the three-pillar system should be maintained and that people should be given a genuine choice.

Since the law took effect in August 2015, Bulgarians can now choose to switch between the pillars once a year. However, this freedom ends five years before retirement when they have to make a final decision whether they want to transfer all their assets to the unfunded state system and just receive a state pension, or whether they want a lower state pension topped up by the defined contribution pension payout from their own pension savings. 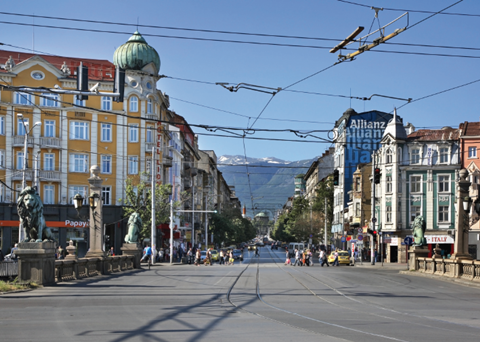 Lions’ Bridge, Sofia: Bulgarians have the option to cross back to the state unfunded first pillar and vice versa

This means Bulgarians can actually wait to see how the state pension stacks up against their private pension savings and make their decision shortly before retirement.

And this is also what the pension industry expects to happen – “unless people are pushed to switch by some government incentive”, according to one person familiar with the matter. To get people to transfer their assets the government could promise higher state pensions, but this would, again, have to be financed by the taxpayer.

Since the law has taken effect, few people have withdrawn their assets from pension funds. If they did, their accrued assets went into the State Fund for Guaranteeing the Stability of the State Pension System (also called the Silver Fund), and new contributions were channelled to the state unfunded first-pillar system. On switching back, the money from the Silver Fund is transferred but the contributions paid into the state system in the meantime are lost.

The Silver Fund is used to top up the state pension system if a deficit occurs. It had been funded with assets from privatisations, but according to Bulgarian sources, the major state holdings have already been privatised and the fund is not expected to grow much in coming years. Meanwhile, a deficit in the state pension system has already materialised, standing at close to BGN5bn.

Biser Petkov, head of Bulgaria’s National Social Security Institute (NSSI), told the Focus Information Agency website recently that expenditures on pensions represent the biggest share in the country’s public social insurance budget, making up over 37%. Currently, 100 working people support 80 pensioners, Petkov said, a ratio that will worsen in the coming 15-20 years, meaning extra reserves will be needed, including money for the Silver Fund.

Nevertheless, around a million Bulgarians with small pensions were to receive a one-off Christmas bonus of about BGN40 in 2015. For active members, contributions to the state pillar will increase by 1 percentage point a year in 2017 and 2018, to reach 19.8%. The contribution rate to a pension fund is still 5% of salary split almost equally between employer and employee.

A source close to the matter, who did not wish to be quoted because of the “politically difficult situation” regarding pensions, is urging members to stay in their fund to keep their options open, not least because the system may face further changes. “They have time to make a choice closer to retirement as to whether it makes sense only to get a state pension or to get a pension from two sources,” he says. 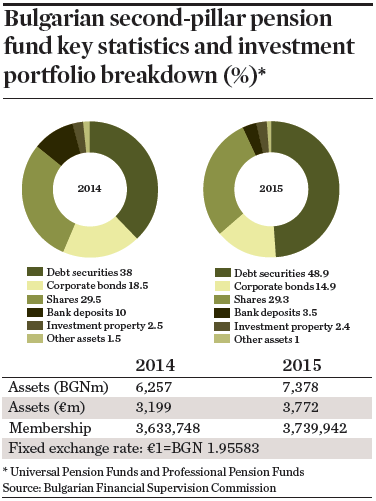 Another change in legislation regards fees. These are to be lowered over the next four years, but this should not be a problem according to the same source, because the system is already quite mature, having started in 2002. Of course, the new legislation allowing for more frequent changes would increase administration costs, but so far few have made use of the option to withdraw assets.

In 2016, the supervisor is planning to carry out EU stress tests across various industries. This will include pension funds as well as banks and insurers. Most pension providers are part of an international insurance group, which should not face problems if they need to increase capital buffers, although smaller funds might face problems. But faith in the pension system could be tested even though, as a defined contribution system, the major risk to pension fund members is market related.

Overall, the source calls on Bulgarians to “be more active, ask their providers more questions, check how the fund is run and who the owner of the pension company is”.