Pension funds have tripled in size since 2003, largely thanks to investment returns. Joel Kranc examines the Canadian model

A recent Boston Consulting Group report called Measuring Impact of Canadian Pension Funds shows that Canada’s 10 largest public pension funds manage about C$1trn (€680bn) in assets and have grown significantly thanks to investment returns. For example, between 2003 and 2014, pension assets tripled. Net flows in that period totalled C$150bn, while investment returns grew by C$600bn. In 2014, eight funds were in the largest 100 and three in the largest 20 globally.

The model, however, is a relatively recent phenomenon. “In 2006, the Canada Pension Plan Investment Board (CPPIB), with nearly C$283bn in assets under management, adopted an active management strategy to seek returns above those available from public market investing, by capitalising on our comparative advantages, which are structural – long-term investment horizon, certainty of assets, and scale – and developed,” says Michel Leduc, a senior managing director at CPPIB.

“Together, these advantages provide us with greater scope and a different perspective than many other investors.  We are not forced to seek short-term returns, and can pursue large, complex transactions where there is less competition,” he adds.

In a short time, the fund has built a global diversified portfolio of public equities, private equities, real estate, infrastructure and fixed income instruments, using both active and passive strategies. 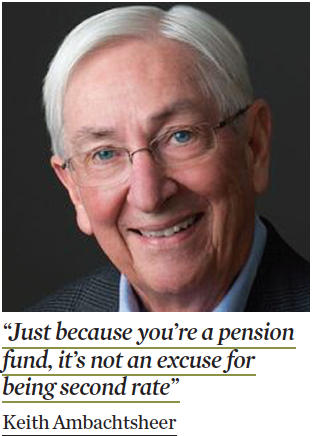 The model itself derives from the decision by large institutional investors in Canada to build their organisations into world-class investment management firms. As Keith Ambachtsheer, president of KPA Advisory Services and author of The Future of Pension Management, says: “Just because you’re a pension fund, it’s not an excuse for being second rate.” He says this is the message that was bought into when pension funds like the Ontario Teachers’ Pension Plan, were considering how to become more competitive and build internal capabilities.

“It was Teachers’ that really created a lot of these ideas in terms of internalising, building in-house skills, in terms of being competitive in labour markets that traditionally pensions funds couldn’t afford to be competitive in. What the data shows is that if you internalise not only are you building skills by these people to think about how to run and evaluate businesses but you’re also saving a ton of money,” he adds.

Ottawa-based Public Sector Pension Investment Board (PSP Investments) with C$112bn in assets manages money on behalf of the civil service, Canadian Forces, Reserve Force and the Royal Canadian Mounted Police. The relatively new fund was also listed on the top 10 Canadian funds and has a mandate of maximising returns without undue risk of loss. 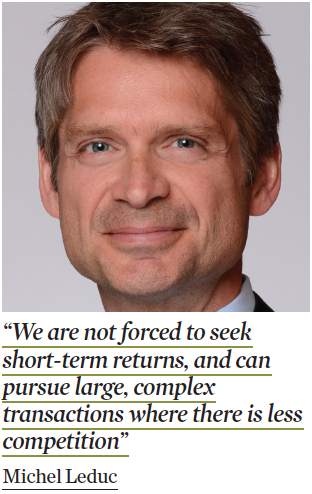 Daniel Garant, the fund’s chief investment officer, says although Canadian funds are diverse and serve different constituents, they share a similar purpose with a clear mandate. Governance is key he says. “You have boards of directors which are basically made up of professional people that have backgrounds in business and investment. So, we have a good governance framework with field experts that are dedicated to investments.”

Garant agrees with Ambachtsheer by stating the capacity to hire and attract the right professionals for internal management (alongside some external management) sets Canadian funds apart. “That’s what makes the Canadian model as successful as it is in combination with the fact that all of these funds are global investors.” For its part, PSP manages about 70% of assets internally.

That number is in line with the Boston Consulting Group’s overall percentage of 75% of assets being managed internally by the top 10. Internal management has helped propel funds into alternative investing on a global basis. The report states that seven of the top 30 global infrastructure investors and five of the top 30 real estate investors come from these Canadian funds.

“You have boards of directors which are basically made up of professional people that have backgrounds in business and investment. So, we have a good governance framework with field experts that are dedicated to investments”
Daniel Garant

The model continues to grow and evolve. A case in point is the C$63.9bn Healthcare of Ontario Pension Plan (HOOPP). According to its senior director, growth and stakeholder relations, Darryl Mabini, the fund employs two strategies. The first is the return-seeking portion, which invests in alternative investments and global markets. The second employs a liability-driven investment (LDI) model where investments (like fixed income) are matched to the liabilities to ensure future obligations are met.

The LDI strategy began in the early 2000s, says Mabini, which helped the fund during the 2008 financial crisis. This realignment reduced the target public equity holdings to 30% of the portfolio and redeployed those funds into long-term debt, real-return bonds and real estate. This decision had a material positive impact on HOOPP’s funded position in 2008 and helped it preserve capital in the face of steep equity market declines. 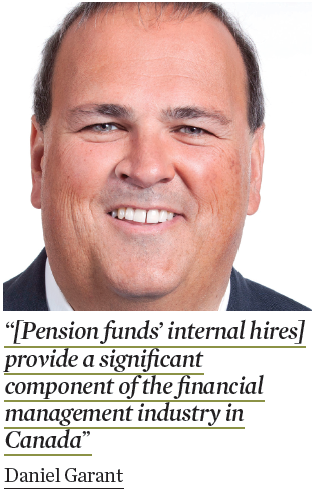 HOOPP has also realised savings from internal management. In 2010, for example, operating costs were C$129.2m, down from C$131.3m in 2009. The decrease is primarily related to the elimination of external investment manager fees. HOOPP’s investment operating costs work out to just under 26 basis points, according to the fund.

One of the benefits of Canada’s large institutional investors is their contribution to the economy (beyond the foundation for retirement security). According to the Boston Consulting Report, C$600bn of gross investments are in Canada and they directly employ about 11,000 professionals, including real estate divisions.

“It is an explicit recognition that these pools are major investors in the Canadian economy,” says Ambachtsheer. “The other interesting thing is that they’ve become active investors over time. You want investors that take an active interest in the investment and organisation in which they are investing, for example the Canadian Coalition for Good Governance, where many of these organisations play a leadership role.” One example of the positive activism these organisations have had is the separation in Canada of board chair and CEO – something the US is still struggling with.

Ambachtsheer also says the funds are helping to build an expertise and pool of professional investors that operate locally and globally. Garant agrees and says the internal hires “provide a significant component of the financial management industry in Canada – we have the banks, of course, but we also have the large pension plan asset managers.”

Overall, the impact of pension funds from one of the world’s smaller financial markets has been disproportionately large compared to its size. The Canadian model works because it has been tested in financial crises and provides a long-term approach to retirement savings and investment. Its impact and reach will continue to grow as these funds open offices worldwide and get a better understanding of local economies and their opportunities.