The UK’s aggregate defined benefit (DB) pension fund shortfall could spike by as much as £219bn (€242.7bn) if the country fails to pass a withdrawal agreement to exit the EU, consultancy firm Cardano has warned.

A so-called “hard Brexit” – whereby prime minister Theresa May was unable to get parliamentary backing for her withdrawal agreement before 29 March – could trigger a 14% increase in total DB scheme liabilities, Cardano said, as a result of gilt yields and interest rates falling. Such an outcome would also weaken sterling and push up inflation, which would also have an impact on DB obligations.

On the assets side, the FTSE 100 index would likely rise as a result of the weakening currency improving conditions for internationally focused constituents. The currency movements would also help schemes’ allocations to global equity and debt, Cardano said.

However, the consultancy forecasted that this would only push up assets by 6% – far less than the increase in liabilities. 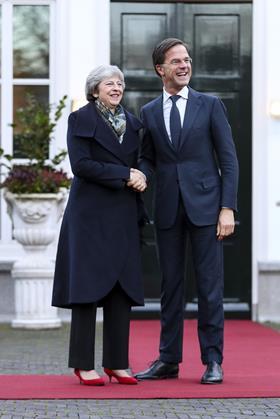 Theresa May discussed the withdrawal agreement with Mark Rutte today

Kerrin Rosenberg, Cardano’s UK CEO, said: “As our analysis indicates, the risks to schemes’ funding positions should not be underestimated and we would encourage UK schemes to think critically about the scale and scope of risks that Brexit may present and to act now – before it is too late.”

Cardano urged trustees and scheme advisers to hedge out interest rate and inflation risks, ensure they have diversified their portfolio by “aiming to minimise risk in UK assets”, and assessing the impact of Brexit on company sponsors.

Theresa May has been meeting with EU leaders today after postponing a parliamentary vote on the withdrawal agreement she struck with the bloc last month. She has met German chancellor Angela Merkel and Dutch prime minister Mark Rutte today.

Should the agreement be passed by the UK parliament – resulting in what Cardano called a “soft Brexit” – the consultancy predicted a 24% reduction in UK schemes’ combined deficit on a buyout basis, equivalent to a £138bn fall in the shortfall.

“With some of the major uncertainties of the UK’s future relationship with the EU removed, a more favourable Brexit would enable growth to improve and with limited slack in the British economy, could increase the pace of [interest] rate hikes, strengthen sterling, push up gilt yields and soften the performance of the FTSE 100,” Cardano said.

Rosenberg added: “The runway into 29 March should allow UK schemes and their advisers to prepare for the worst – even if the eventual outcome ultimately surprises on the upside.

“As we enter into 2019, Brexit will be just one of a range of risk factors that schemes should be proactively addressing in their portfolio positioning. We have reached inflection points across a number of fronts: the potential impact of monetary tightening, the global growth trajectory and rising protectionism should be front of mind for trustee and their advisers going into the new year.”

Separately, the Pension Protection Fund (PPF) reported that UK DB schemes were in surplus in aggregate as of the end of November, following updates to its dataset.

Following the publication of the PPF’s annual Purple Book of DB statistics, as well as updated actuarial figures. This resulted in an aggregate funding position of 100.9% – the first time the PPF 7800 index had recorded a surplus since the first half of 2011.

However, the fund – which compensates DB scheme members when their scheme sponsor goes bankrupt – warned that there was “still significant risk in the PPF-eligible universe”, as more than 3,000 schemes were still in deficit.

The PPF calculates DB liabilities and assets on a “section 179” basis, which estimates the cost of insuring schemes to pay PPF levels of compensation.