Investors have been speculating for some time as to when the bull market in equities would turn.

The fourth quarter of 2018 appeared at first to be a turning point, but most investors who lost out at the end of the year have seen their portfolios bounce back.

However, according to Fidelity International’s annual analyst survey, global corporate sentiment has fallen to its lowest level since 2016 amid weakening consumption and rising costs.

This year 165 Fidelity equity and fixed income analysts participated in the survey, which aggregates data gleaned from the more than 16,000 meetings they had with listed companies around the world in the past year.

The 2019 survey shows that corporate sentiment – as seen through the eyes of the analysts – has dropped from 1.6 last year to 0.6, where anything above zero is positive sentiment and below is negative.

A third of Fidelity analysts said their sectors were in a slowdown or recession, compared to 13% of analysts last year. According to the asset manager, analysts are split 51% to 49% as to whether the business cycle is at an end.

Michael Sayers, director of research for equities, said: “An exuberant start to 2018 has given way to a cautious 2019. This year’s pessimism has two core drivers, a weaker consumer and increasing costs of doing business – both of which threaten to squeeze profit margins in 2019.

“While we do not see a full-blown recession in the next 6-12 months, it is clear we have taken another step towards the end of the cycle that started a decade ago and, as a result, corporates’ approach to risk management is more important than ever.” 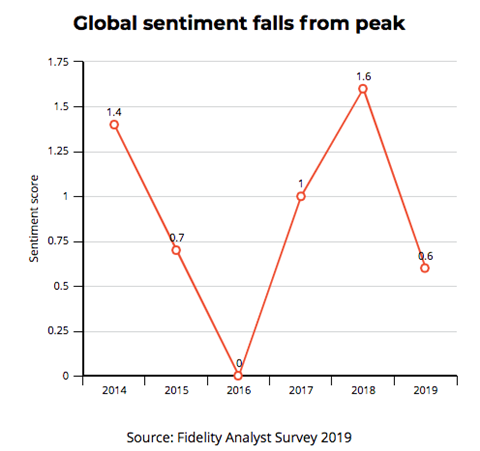 Meanwhile, corporate sentiment in China has turned negative (-0.4) – the only region to record a negative score in this year’s survey. Of Fidelity analysts covering China, 70% said they expected returns to decline this year. 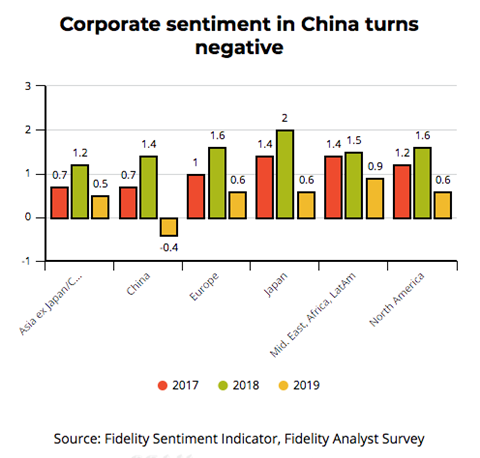 Marty Dropkin, global head of research for fixed income, said the impact of the US-China trade negotiations was a key issue that “has brought a lot of uncertainty into the system”.

“Manufacturing remains a key driver of growth for the Chinese economy as a whole, and for consumers, the uncertainties extend to their prospects for wage growth, which has a second order effect on consumption,” Dropkin added. “However, investors should be mindful of Beijing’s ability to stimulate the economy.”