• Even those who have no holdings in Asia are likely to be affected by developments in China
• The channels through which China is connected to the rest of the world include imports, exports, foreign direct investment and its currency
• Asia is becoming increasingly integrated as an economic region
• At the same time Asia, with China at its centre, is becoming more important to the rest of the world

Although most investors know that China has a huge economy, many are probably unaware of the scale of its indirect influence on the investment world. Even those who avoid Asia entirely could find themselves unwittingly affected by developments in China.

Take, for instance, a US investor who puts all his assets into US equities. In this hypothetical example, he entirely avoids investing abroad or in any other asset class. Such an investor could find himself in trouble if he fails to understand key economic dynamics related to China.

With a little probing, it is not hard to imagine one mechanism through which this might take place. It is well known that technology stocks have played a key role in powering the surge in US equities in recent years. Yet these are vulnerable to the escalating trade tensions between the US and China.

Michael Power, strategist at Investec Asset Management in Cape Town, uses the Apple iPhoneX to illustrate this point. It is estimated that Apple pays $370 (€318) to purchase each unit from Foxconn (also known as Hon Hai), the outsourced manufacturer, in China. Apple then charges $999 for consumers to buy each phone in the US. It is a reasonable bet that a large chunk of the $629 price differential represents a profit for Apple, even if the exact figure is not publicly available. “The lion’s share is pure profit that falls to Apple’s bottom line,” says Power. 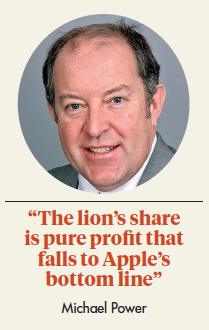 Yet, if Apple were forced to manufacture its phones in the US, it is unlikely it could do so at anything like the $370 charged by Foxconn. As a result, the iconic US technology company would find its profit margins slashed. It is easy to see how share prices could suffer as a result.

This example is meant to illustrate a more general point rather than being a special case. Chinese firms are often part of global supply chains that connect to other companies in both developed and emerging markets.

Often Chinese firms import both components and raw materials from around the world and then export the finished products. A hit to a Chinese company can therefore have an impact in many unexpected places. The effect could become painfully apparent in relation to trade conflicts but it is part of a trend with broader consequences.

Nor are the linkages confined to the equity markets. Bob Michele, head of global fixed income, currency and commodities at JP Morgan Asset Management (JPMAM), says for bond investors “China is probably the most important area to pay attention to outside the US”. He points out, for example, that China, alongside Japan, is one of the two largest holders of US Treasury bonds. “At every strategy meeting we spend a lot of time thinking what the PBOC [People’s Bank of China] is doing, what industry in China is doing and the knock-on effect on the global economy,” he says.

So clearly China has a substantial influence even on developed country assets. This is not the result of a conscious policy but, on the contrary, the outcome of China’s large and still growing economic weight in the world. 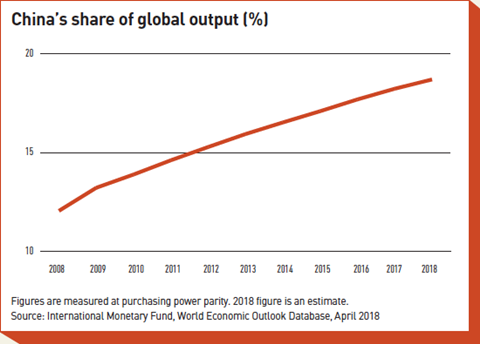 To better understand China’s increasing reach it is necessary to look more closely at its links with the global economy. It is not just a question of acknowledging the scale of China’s influence but of working out the channels through which it operates.

Chi Lo, senior strategist for Greater China at BNP Paribas Asset Management, identifies several channels through which China is connected to the global economy. They include exports, imports, foreign direct investment (FDI) and the renminbi. China’s weight is more important in some channels than others but they all merit examination as areas of importance.

In relation to exports Chi Lo points out, like Michael Power, that China is part of an integrated global supply chain. He estimates that, on average, 35-40% of the value of Chinese goods are foreign value-added. In other words, more than a third of the revenue earned when China sells its goods ends up outside China.

In addition, China is an important source of demand for the global economy. If China reduced its imports of foreign goods and services, then the countries that export to China would suffer. In relation to components for manufactured goods, the bulk of them come from East Asia. But important sources of raw materials include non-Asian emerging markets such as the Middle East, Latin America and South Africa, as well as Indonesia and the US.

Trade ties within Asia are so close that it is increasingly acting as an integrated economic region. According to the Asian Development Bank, intra-regional trade is steadily rising, increasing from 53.9% in 2008 to 57.3% in 2016 (Asian Economic Integration Report 2017). The flip side of this is that, from an Asian perspective, other regions are becoming relatively less important. For example, Gavekal, an investment research firm, points out that South Korea sends 24% of its exports to China and 50% to Asia overall. In contrast, the US only accounts for 14% of its exports.

Just because other regions are becoming relatively less important for Asia it does not follow that Asia is becoming less important for the rest of the world. On the contrary, Asia’s rapid growth means that, from the perspective of those outside the region, it is becoming increasingly important. For instance, China is sucking up huge amounts of raw materials in the construction of its Belt and Road Initiative (see interview with Xiao Fu, Bank of China International, IPE September 2018).

It would also be a mistake to make a rigid separation between trade and FDI. Often the two are closely related to each other. For instance, in the opening example of the Apple iPhone it should be noted that Foxconn is a Taiwanese firm. It has numerous factories in mainland China but the owners of the business are in Taiwan. This creates another mechanism through which economies in the region are increasingly bound together.

However, the FDI pattern is complicated by China’s capital controls. Although it welcomes inward FDI, it carefully regulates outflows as it fears they could be destabilising. That helps explain why Japan is a bigger player in relation to FDI into south-east Asia than China. Shin Sawada, director, investment management at Sumi Trust, points out that many Japanese firms have diversified from investing in China to investing elsewhere in the region. Part of the motivation is economic – with Japanese companies trying to optimise their international portfolios – but Japanese firms have already reacted against political hostility they have sometimes experienced. 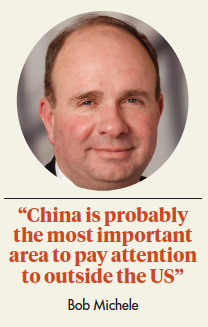 In relation to the growing role of the renminbi, the pattern is mixed. On the one hand, in many respects the dollar remains by far the most important currency from an international perspective. According to data from the International Monetary Fund (IMF), the dollar accounted for 62.48% of official foreign exchange reserves compared with 20.39% for the euro and only 1.39% for the renminbi. Although the renminbi’s importance is clearly rising in this sphere, it is from a low base.

But there are ways in which the dominance of the dollar is starting to erode. Michael Howell, the managing director of CrossBorder Capital, pointed out in the July 2018 issue of IPE that trading started in March in a renminbi-denominated oil contract on the Shanghai futures exchange. It was only a small step but it was step away from the decades-old convention that oil, along with other commodities, should be traded in dollars.

In Asia the importance of the renminbi is much more developed. Chi Lo points out that “if you look at the data, over the past 15 years or so, the correlation of movement between Asian major currencies and the renminbi has increased at the expense of the Asian currencies’ correlation with the dollar and the euro”.

The impact of China on the rest of the world is undoubtedly growing but it is hardly new. In the voluminous discussion of the 10th anniversary of the Lehman crisis, little has been said of the subsequent role of China in bolstering the world economy. JPMAM’s Michele points out that, with its stimulus, “the Chinese stepped up and created aggregate final demand in a world that was devoid of it”.

Without Chinese action in 2008, the authorities around the world would have found it far harder to deal with the financial meltdown. Yet, a decade ago, China only accounted for about 12% of global output compared with almost 19% today, according to IMF figures (see figure).

Investors today would probably be advised to at least monitor key developments in China. Even if they do not invest in Asia, their fortunes look certain to be affected by movements within the Asian giant. They can choose to ignore China if they wish but there will be no escape from its influence.