Pension consolidation: is it all good news?

2
Climate risk: Running out of time

Climate risk: Running out of time

Close relationships with powerful investment tools can have disastrous unintended consequences, as credit rating agencies and their clients discovered after the global financial crisis.

The disclosure by corporations of their climate-risk scenario analysis will not deliver the Paris Climate Accord target to restrict global temperature rises to 2°C above pre-industrial levels. Understanding this is critical to averting a climate disaster for humanity and, in the same way that war is too important to leave to generals alone, so this aspect of investment needs to be understood by as many people as possible.

Humanity’s impact on the climate is manifest globally and getting worse every day. Climate-related disruption and disasters are increasing, while the combined forces of predatory delay and timid incremental approaches are working against attempts to reduce emissions to achieve the goals set in Paris.

The unprecedented high-impact, high-probability nature of climate risk places it in the category of existential risk where the “adverse outcome would either annihilate earth-originating intelligent life or permanently and drastically curtail its potential”, according to University of Oxford philosopher Nick Bostrom. Existential risk is beyond the experience of communities, governments, corporations, and investors but it must be understood and addressed as it poses almost unimaginable negative consequences. And even if we manage to avoid existential risk, there is still a much higher probability of outcomes that are genuinely awful and disruptive to economic well-being.

Leaving aside just how much climate change played a role in the Syria crisis, for example, it is undeniable that recent refugee movements have destablised EU politics and economies. And refugee movements – much bigger than we have seen so far – are almost certain if we continue on the current path towards 3C° to 4C° global warming.

Undeterred by fossil-fuel-vested interests, the scientific community continues to call for action to reduce greenhouse gas emissions – but time is running out. The longer we wait, the steeper the emission reduction curve needed to keep the climate from changing dramatically. The science is complex but the implications for action are simple. We must reduce emissions as fast as possible. Until emissions are zero, we can only slow the rate of future warming, not cool the planet.

Time for investors to step in

Investment managers and asset owners can play a huge role in reducing emissions. Their influence with the corporate world – the biggest source of greenhouse gas emissions – can most effectively trigger the required re-allocation of capital to decarbonise. This needs to be done urgently if we are to bend the emissions curve by 2020.

The mood music from shareholders on the climate crisis is changing. This year BlackRock’s Larry Fink wrote to CEOs arguing that corporations must have a social purpose and address the most significant issues of our time. But corporate leaders need to reallocate capital and move towards a low-carbon economy now. Clearly, this is not occurring anywhere near fast enough. 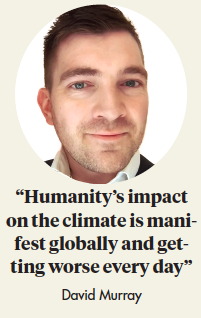 Under the auspices of the Task Force on Climate Risk Financial Disclosure (TCFD), scenario analysis has become a major focus of shareholder resolutions in 2017 and 2018. This was a good learning phase. We now need to move from asking for climate risk scenario analysis disclosure at selected companies to requiring low carbon transition plans across high impact sectors.

The initial focus on scenario analysis was understandable. Many corporations find it a useful tool for risk management, strategic planning, and determining optimal transition pathways given the probabilities assigned to various scenarios. Financial regulatory bodies also find it helpful in assessing risk, using it to prioritise their own work but also to trigger governance oversight at the firms they monitor.

However, it will be easy for company management to delay moving from scenario analysis to emissions-reducing action. Delaying action used to be easy for CEOs to justify. Now any form of delay should be seen for what it is: pernicious and self-serving – witness ExxonMobil’s 2018 climate risk report. Assessing each investment firm’s exposure to climate risk is a world away from knowing whether the biggest investors are doing what they reasonably can to mitigate that risk in the real world.

Climate-risk scenario-analysis disclosure is a new and contested area, and often results in complexity that stymies decision-making. And companies who do not want to do it often argue that it could force them to reveal information that could be useful to competitors.

Each scenario requires separate disclosures and explanations, including a set of detailed final disclosures of business impacts, all of which are challenging to manage. Scenario analysis is akin to performing brain surgery on your organisation in public. It is no wonder managers are so sensitive about disclosure, especially those who do not wish to act on the conclusions of authentic scenario analysis.

All of this plays to the hands of those practising predatory delay, which US futurist Alex Steffen describes as “the deliberate slowing of change to prolong a profitable but unsustainable status quo whose costs will be paid by others”.

Asking companies to provide scenario analysis gives them the opportunity to dither, in contrast to requiring them to disclose their transition plans on emission reductions. A transition plan addresses climate risk as a threshold, and outlines the pros and cons of a rapid shift to a low-carbon economy.

While transition plans are not in themselves action, they are the most essential step just before action. They show whether a company is thinking about the right things: not just operations and technical carbon matters but also changes in investments, governance, public lobbying, and remuneration.

A credible transition plan should set out targets and timeframes for action. This will send a powerful, positive signal to others in the investment ecosystem; the respected investment professionals at buy-side firms as well as influential sector analysts at sell-side and credit rating firms, proxy advisers, and auditors.

When sector-wide reporting occurs, early adopters of transition plans will be rewarded for aligning their businesses with the opportunities of a low-carbon economy.

In stark contrast, scenario-analysis disclosure is mainly of interest to ESG analysts, not scientists measuring progress toward a sub-2°C outcome. Incremental change might eventually lead to important innovations but with climate change there simply is not enough time.

Given the gravity of existential risk, we must be clear that a target of zero emissions by 2050 is required to keep global warming below 2°C. Now the market needs to discuss how this can achieved, and it must happen faster than the investment community believes possible.

This pragmatic approach bypasses the complexity of scenario analysis. If we know the outcome we must achieve, then scenario analysis becomes one of several enabling tools for managers. The elimination of existential risk from the known threat of climate change must become a core corporate objective.

Forceful stewardship and the exercise of fiduciary responsibilities stand out as the overriding priorities for investment managers and asset owners. It is clear that those with the biggest assets under management should bear the biggest burden in encouraging companies to reduce greenhouse gas emissions.

The most effective way to quickly reduce emissions is for companies to implement meaningful and aggressive transition plans to net-zero emissions. The best way for investors to achieve this goal, if they do not want to expand their ESG teams by a hundred fold, is to vote routinely for transition-plan resolutions.

Scenario analysis can be a powerful tool, but it has an unacceptable cost when it distracts investors from engaging with companies to reduce emissions with the urgency existential risk requires.

Pension consolidation: is it all good news?