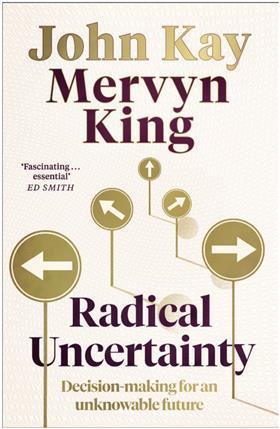 Within the terms of their own analysis, the authors of Radical Uncertainty might be remembered for a prescience they could neither possess nor aspire to. Published as the full scale of the coronavirus outbreak was becoming apparent in early March, the events that their book cannot describe still serve to underline its central points.

In short, the authors contend, individuals, businesses and governments should be prepared to make decisions with an awareness of their limitations in the face of an inherently unpredictable future. They will be more resilient if they organise themselves to be able to do so and are sceptical of models that offer spurious certainty. The new concept that Kay and King bring to bear is that of ‘radical uncertainty’. Both authors are academic economists; King was Bank of England governor during the last financial crisis.

In August 2007, in the aftermath of what was later termed the ‘quant quake’ – a liquidity crunch in quant hedge funds – David Viniar, then CFO of Goldman Sachs, was famously quoted in the Financial Times, with statistical hyperbole, as saying that he had witnessed a “25 standard deviation event”.

Some have hypothesised that quant hedge funds (such as market-neutral long/short equity funds) were operating in a relatively closed and opaque world with jealously-guarded trading models and had not realised that their models and trades had actually converged or been imitated. When one portfolio is suddenly liquidated, the assumption goes, they were all hit.

In terms of preventing that situation, an understanding of what Kay and King describe as “what is going on here”, had that been possible, would have been more helpful.

Understanding “what is going on here” is a thread that runs through this book; aviation, engineering and space science are praised for their clear ambitions – building aircraft, bridges, or spaceships that do not blow over in high winds or break-up mid-air.

Central to the work is to understand how people and organisations make choices in a radically uncertain world. Narrative framing and intuition are necessarily components of human decision-making, the authors contend. Narratives can serve to understand what Leopold von Ranke, the father of source-based history, described as “wie es eigentlich gewsen ist” or “what it was really like”.

Institutional investors are part of this spectrum. The authors note that UK pension regulations since the 1990s have aimed to make pension schemes safer. But instead of making them inherently more secure the models with which funding ratios are calculated – discount rates, expected returns models for future longevity – create spurious certainty. “Simple, robust principles” would be preferable.

Kay and King take aim at a variety of purveyors of this kind of spurious certainty. Academic macro-economists are high up among those targets, with at least a passing reference to “physics envy”, a term attributed to the economic historian Philip Mirowski to describe the way in which practitioners of what are essentially social sciences like economics aspire to the precision and consistency found in natural sciences.

An illuminative quote from Keynes, writing in the 1930s, observes Max Planck as once having said that he saw economics as a harder discipline than his own field of theoretical physics due to the inherent need for subjective judgements.

Chicago School economic orthodoxy comes in for criticism (rational economic man is “hard to find”) but so does behavioural economics (so-called biases may not be flaws but advantages in solving real problems). Ultimately, both schools focus, at least in the theory, on “small world” problems.

Models should be valued for the insights they provide but not relied upon to provide accurate forecasts. Value-at-risk (VaR) models – or perhaps more specifically, supervisory tools based on the historic volatility of asset classes based on VaR and used, for instance, to govern the asset allocations of pension funds without understanding the context of each set of assets and liabilities – might lie at one end of the spectrum.

Robo-adviser software used to determine an individual’s asset allocation might lie at the other end of the spectrum if the limitations of such software is not understood and respected.

Evidence-based policy comes in for criticism where it relies on models but also supplies a false sense of certainty where none exists, or seeks out the evidence that is desired ex ante – or “cover” – to justify a policy decision. “Evidence based policy has become policy based evidence,” Kay and King opine. Many decisions are taken on the basis of what is easy to justify, not what is best.

A case study of spurious certainty is WebTAG, the UK’s economic model for assessing transport projects. Using fixed inputs, such as the value of an hour of time for certain road users, train travellers or cyclists, for instance, it uses macroeconomic projections to compute these values far into the future.

This book is not, in itself, a primer for good decision-making and there is no attempt to create a model for such a process. Yet the reader can infer conclusions: groups are well suited to decision-making if members of the group focus on what they know and not what they think.

Kay is clearly a fan of Richard Rumelt’s 2011 management work Good Strategy/Bad Strategy. Students of the pragmatic school of good pensions governance in Canada, the Netherlands and the UK, and propagated by the likes of Keith Ambachtsheer, will be familiar with the authors’ thinking.

Brexit may have been on their minds as this book came to fruition but it warrants scarcely a mention (just one by my counting). And that is equally scathing towards both sides of the referendum campaign in the use of statistics. This lack of reference to one of the most salient events in the UK’s recent history may be a diplomatic truce between the two or intended as a kindness to British readers.

A future edition of this work might contain a chapter on coronavirus and how decision makers responded to the virus’s inherent radical uncertainty and the unprecedented economic fallout. But that might warrant a whole book in itself.