As we enter May and lockdowns continue, the world feels like it is in the doldrums. The doldrums refers to the oceanic area of the equator where prevailing winds cancel one other out. They are mostly calm but are susceptible to sudden violent storms. As the impact of the coronavirus continues to make itself felt, largely out of sight in hospitals and care homes, the parallel with today’s social, market and economic situation feels unusually apt.

For long-term investors, pension fund investment committees included, it is truly hard to make meaningful portfolio decisions in the face of such uncertainty. Many will understandably be taking a neutral stance as they weigh up what they need to do.

These decisions include whether or not to rebalance as equity and riskier bond holdings decline and fall below strategic weights, leaving illiquid holdings overweight, and when or how to take risk as opportunities present themselves. There are some, albeit limited, signs that some investment committees are taking risk here and there.

Some take comfort from the willingness of governments to open the taps of state spending and to deploy their firepower to mitigate the effects of the crisis through direct support to companies, loan guarantee schemes, employment furlough subsidy schemes or even direct ‘helicopter money’ in the US.

Others feel unsettled by the sense of calm or even enthusiasm that has descended on markets as equities, investment-grade and high-yield bonds have all rallied as a response to government stimulus schemes.

Last month, I highlighted the need for national supervisors to grant forbearance to pension funds – what might be termed ‘supervisory easing’ – to allow trustees and investment committees to act in the true long-term interest of their beneficiaries. 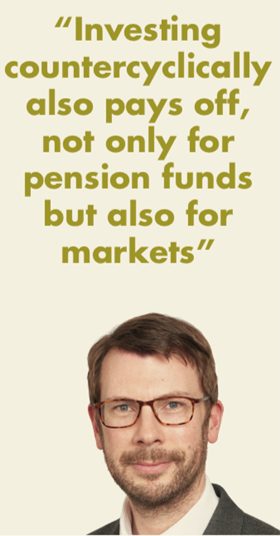 In the last crisis, some regulators received criticism for a rigid stance as they sought to maintain the supervisory rules. In the Netherlands this included making pension funds sell risky assets when their solvency ratios fell below the minimum.

Selling good assets in bad times not only led them to forego future returns; it also made it harder for them to recover their previous balance sheet position as they were forced to adopt a lower-risk strategy.

There are signs that regulators are taking a looser stance this time, seeking to maintain a pragmatic balance between upholding rules and facilitating forced asset sales on the one hand, and fostering the conditions for funds to benefit from the eventual recovery on the other.

Yet PensionsEurope could not resist pointing out, for its part, that this task is all the easier in the absence of a harmonised EU supervisory framework, which its members fear would be a Trojan horse to apply Solvency II-type regulations to pensions.

Investing countercyclically also pays off, not only for pension funds but also for markets and the wider economy. Research published in December 2018 under the auspices of the International Organisation of Pension Supervisors (IOPS) found that Polish and Italian pension funds largely invested countercyclically in the 2008-09 crisis.

While Italy has suffered two periods of growth contraction since 2008-09, Poland has enjoyed continual growth since the 1990s. While its avoidance of recession in the aftermath of the great financial crisis cannot be attributed solely to pension funds, as net buyers of domestic equity throughout the downturn they undoubtedly provided a source of liquidity to listed firms and contributed to overall market stability.

Both France and Germany have been creating new frameworks for defined contribution pension funds as they seek to reduce the pressures on the state system. Aside for the need to boost private pension savings in the face of a creaking state pension architecture weakened by demographic pressures, in France at least there has been a recognition that Solvency II has considerably diminished institutional domestic equity as insurers have adapted to the new rules.

How ironic that the attractions of defined contribution pensions are at their lowest just at a time when long-term capital is most needed.

As we exit this crisis, governments will doubtless eye the balance sheets of pension funds as a source of recovery capital. In the past decade, there have already been programmes in various European countries to channel pension or insurance capital into one or other area of the economy – small and mid-cap lending in France and the Netherlands, mortgage securities in the Netherlands and infrastructure. Some have been more attractively structured than others.

At least one pension fund, AMF in Sweden, has pledged to support the domestic economy by providing additional equity to firms in which it is already a long-term investor. Forward-thinking pension funds and their representative bodies will doubtless already be considering the fact that if they do not demonstrate support for domestic economies, governments may find ways to compel them to do so.

While long-term investing may be a fairly nebulous concept for many, praised for more than it is practised, a long-range horizon is one of the true benefits that most pension investors enjoy. It is vital that pension funds grab the opportunities afforded by this perspective and are not forced, directly or by stealth, to hold unattractive assets on their balance sheets or otherwise to do the bidding of governments. This would be form of ‘mission creep’ that future generations can ill afford.