Stuart Kirk, global head of responsible investing at HSBC Asset Management, has been suspended for saying that investors need not worry about climate risk. Those among the company’s clients who are concerned with sustainability may be relieved that he has been suspended, but there remain questions about greenwashing at the company and within the whole asset management sector. 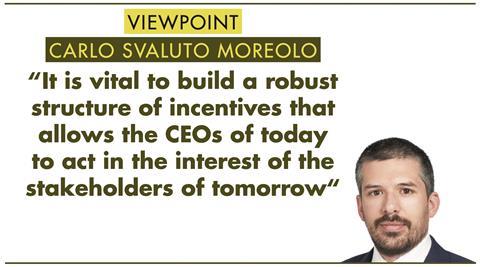 The controversy highlights the scale of greenwashing and shows that it is a problem both for those who believe that climate is indeed a risk to worry about – who are the majority – and for those who do not. But while the asset management sector has plenty of work to do to address greenwashing concerns, it pays to remember that climate risk is of a systemic nature. Mitigation or adaptation will not be achieved only by changing investment decisions.

Tackling climate change requires behavioural change across the whole system. One component that is still somewhat overlooked, although it is getting increasing attention, is the issue of executive pay.

The remuneration of company CEOs was actually under the spotlight during the past AGM season, with high-profile investors such as the Church of England Pensions Board taking strong stances against spiralling compensation packages for executives. But the attention seemed focused on the quantum of compensation, which is indeed important, instead of the links between pay and performance with regard to climate.

As Allianz Global Investors and Cevian Capital argue in this issue’s Ahead of the Curve column, unless executive pay is linked with climate key performance indicators (KPIs), corporate pledges to tackle climate change are almost meaningless.

It is vital to build a robust structure of incentives that allows the CEOs of today to act in the interest of the stakeholders of tomorrow. CEOs may not be around for more than a few years, but with the correct incentives, they will be compelled to take action that facilitates the achievement of key long-term goals in each company’s fight against climate change.

Many companies already include climate-related, or more broadly ESG-related, performance targets within executive remuneration structures. However, as AllianzGI and Cevian argue, unless targets are measurable, transparent and in line with a company’s stated goals, they are not meaningful. Remuneration packages must therefore be fine-tuned to ensure CEOs and companies are accountable to stakeholders on their climate pledges.

Regardless of whether investors lean towards mitigation or adaptation to climate change, they must recognise that greenwashing begins at corporate level.

But that is precisely why asset owners have to step in. They should demand that their asset managers make their positions clear, and behave coherently.

Many of them have not expressed a strong view, through policy statements or voting behaviour, about linking executive remuneration with climate or ESG KPIs. Unless they state clearly whether they support such incentive structures, and vote accordingly at shareholder meetings, their credibility on ESG should be called into question.