When early pan-European pension concepts took shape, spearheaded by the late Koen de Ryck of Pragma Consulting and his groundbreaking 1996 report, there was a vision that cross-border pension provision by the likes of Unilever and Shell would provide a European model for DB pensions that would boost labour mobility, take workplace retirement provision to under-served markets and set standards for the future.

While the IORP I and IORP II Directives have succeeded in harmonising and raising standards, and despite some cross-border activity centred on Belgium and Ireland (less relevant following the UK’s departure from the EU), the Directive failed in its stated early 2000s’ objectives of boosting labour mobility and cross-border provision.

A clear sticking point was unharmonised tax treatment in member states (tax falling outside the scope of the EU treaties), although the IORP legislation elegantly sidestepped this issue by allowing single-country compartments in cross-border arrangements where contributions are taxed according to the local rules and subject to the appropriate labour laws and standards.

With DB occupational pensions scarce outside the Netherlands, Ireland and Sweden, IORP II is irrelevant in most member states, particularly following Brexit.

Attention has now rightly moved to DC pensions savings as countries like Germany, Spain and Ireland seek to boost long-term retirement savings. The Pan-European Personal Pensions Product (PEPP), a child of the 2017 financial services action plan, is the Commission’s answer to the retirement-savings gap question. It aims to create a simple third-pillar pension product akin to America’s 401(k) plan, which shelters about $7trn in US long-term savings.

The vision, as initially outlined by the Commission five years ago, is essentially two-fold. The first aspect is to boost pension provision across the EU; the second, is to channel EU savers’ money away from unproductive government bonds and cash into asset classes with a better risk/return balance in the long term. Iliquid assets like infrastructure are often cited as a key target. 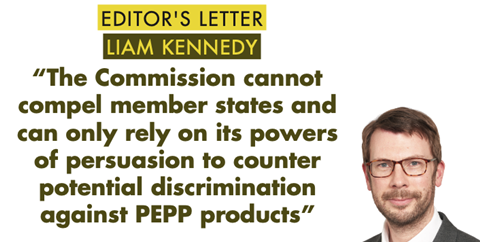 Early estimates by the Commission pointed to a potential €2.1trn market by 2030 for the PEPP. Yet this looks overblown as a number of constraints have conspired to hobble the PEPP concept from its birth.

The most frequently cited issue is the 1% charge cap for the basic PEPP, which needs to cover all costs, including personalised advice. This is seen as a key barrier to entry for potential providers.

Decent income tax deductibility for contributions and a level playing field with domestic vehicles would help make the PEPP attractive. But the Commission cannot compel member states to institute these measures and can only rely on its powers of persuasion to counter potential discrimination against PEPP products.

Insurers also complain that it is hard to write guarantees within the PEPP wrapper, decreasing their chances of entering the market and catering to savers with conservative investment tastes.

Despite these headwinds, PEPP could be a slow burner, with market entrants gradually entering the market as the concept takes root. Latvia has already introduced legislation to, in effect, create a domestic PEPP-type product. Other countries could follow, effectively achieving the EU’s objective of boosting pension saving by domestic means. PEPP will have served some purpose as a poster child.

Technologies like robo-advice could, in time, help overcome the limitations of the price cap. If member states use fiscal rules to discriminate against the PEPP, the ECJ could rule against them.

Like the 401(k) in the US, the PEPP could also take root as a preferred workplace pension vehicle thanks to its simple structure and low cost. And in a post DB pension era, it could prove attractive to multinationals as a cross-border tool.

But EIOPA’s summer 2021 predictions of 13 PEPP market entrants look overblown. IPE has evidence of only three willing providers and only one of these – Portugal’s Ageas Pensões – looks likely to have a product ready by the 22 March start date. None of the three, which include a Cypriot and an Irish company, have pan-EU reach or a brand that is recognisable across borders.

According to IPE’s own analysis of 17 leading European asset managers in January, not one of them was willing to publicly state that it would launch a PEPP and 11 flatly said they would not.

While early predictions of a multi-trillion PEPP market won’t be achieved, and there may be grounds for optimism in the long term for the concept, the support of at least some asset management household names will be needed if PEPP is to succeed.